[Kyle]As we were pulling up anchor in Isla San Francisco, The cruise ship that we had seen in Los Gatos came in and dropped theirs. Again, we passed close by them and waved as we turned for our next stop on Isla La Partida. 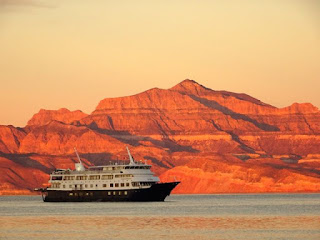 We were not the only ones with an early start

We had very little wind, but we knew it was coming, so we were doing our best to wait patiently for it. We spotted lots of other sailboats, mostly going north, mostly motoring. We crept up on Partida very slowly, being careful not to startle it. We didn’t want our anchorage to spook and run even further.

As we arrived, we got a huge treat. I saw a big splash out of the corner of my eye. I thought it might have been a dolphin, but there was only one splash. Dolphins do it a lot. Another one came a couple of minutes later and I was able to see that it was a ray doing a big front flip. As we approached the anchorage at Ensenada Grande, we saw more and more of them doing all kinds of tricks: front flips, back flips, wingovers, hammerhead stalls (where they come out forward, stop and fall back in backward). 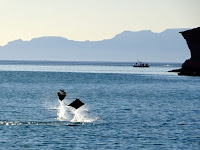 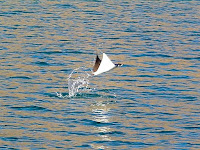 When we got our anchor set, we noticed several smaller ones in the anchorage, whose main trick seems to be a painful-looking belly flop. Perhaps they were juveniles trying to get the hang of it. As sunset approached, there were flying rays everywhere. The loud crack they made when they hit the water would bounce off the cliffs in a receding echo, making it sound like we were half a mile from a shooting range, or in the middle of a sporadic firework display. What great evening entertainment! Even late at night, every time we would hear a splash, we would each crack a smile.

We decided to sleep in a little the next morning. That was a huge mistake. Our plan for the day was to hike a trail from the beach to a viewpoint on the other side of the island.

The trail started out nice enough, but it wasn’t long before the abundant trail markers were directing us to leave the nice dirt path and go straight up the arroyo, hopping from boulder to boulder. That kind of walking wears you out pretty fast. It feels more like negotiating an obstacle course, albeit a mild one. By the time we had covered most of the distance to the top, both of us were feeling way more tired than we had expected to be by that point. We were committed by then and were determined to see the hike through. When we finally broke through to a view of the eastern side of the island, we were more than ready to sit for a while and have lunch with a view.

The way down was not as difficult as we had expected, which was a relief. Our main problem was that all of our stepping stones had also become cooking rocks. We were descending through a shadeless oven. At one point, I went to get an annoying rock out of my shoe and found that I could not lean on anything to do so because everything that wasn’t covered in needles was way too hot. When I grabbed my shoe, I found the sole was too hot to hold onto as well.

The guys at the picturesque beach scuba camp, whom we’d chatted with on our way up, sympathized with us once we made it down and kindly supplied us with an iced water – heavenly.

After rowing back to Begonia, the first order of business for both of us was to have a swim. Ah, that was marvellous! In a few minutes, all of the excess heat of the day was carried away.

We decided the next time we go hiking in these parts, we’re going to get up early and get it done before the sun gets too high. Midday is for finding a breezy spot to camp out in the shade. You’d think México would have a name for that. 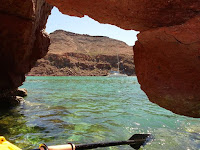 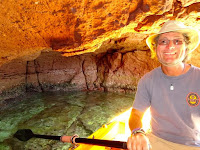 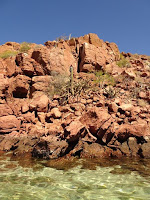 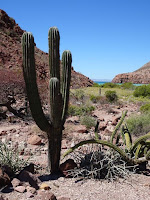 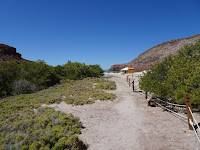 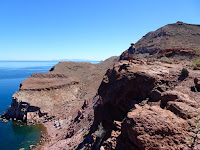 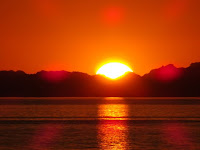 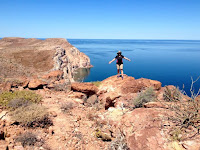 After successfully avoiding falling asleep after the swim, we decided to tidy up a bit before the sun set. That didn’t work either. The rays were putting on an even bigger show than they had the night before, which made it impossible to go inside and do anything. We watched them for a couple of hours until it got too dark to see them any more. Maryanne was being constantly frustrated while trying to photograph their antics. They would jump on one side of the boat; when she would raise the camera, they’d start jumping behind her. She’d spin around and they’d start jumping behind her again. There were so many, it was hard to know where to look.

I eventually gave up on photography and got in the dinghy to see if I could get closer. I managed to get to where I had one come up to eye level maybe eight feet away. That was pretty cool, but the coolest thing was when I tried to track it once it was back into the water. I looked down and saw dozens of them swimming under me. They were all evenly spaced and it looked like I was gliding over a giant checkerboard. It turned out only a tiny proportion of them had been jumping.

Some kayakers launched from the beach and managed to get into the middle of a very big group that were jumping all around them. They must have had fifteen minutes where there were at least five rays in the air at the same time. That is going to be one cherished vacation memory!

These rays are amazing. I'd never heard of flying rays before. Still learning after all these years, thanks to you. Weren't you fearful they would pounce on you? I mean, these are no small things...

Hi Carla - those Rays are indeed quite substantial - luckily we have a good zoom lens :-)