[Kyle]The forecasts promised a sail in light tailwinds and sunshine to Bruny Island. I was looking forward to that one. 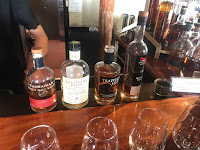 It never materialized. We ended up in cold rain and a gusty, freezing wind the whole way. By the time we anchored, all I wanted to do with the rest of the day was hide inside under a few blankets.

Things were much improved in the morning. The wind was down and it seemed like it might almost get hot later. We waited a bit for it to warm up and then headed ashore to the only thing around, which was the House of Whisky. By then it was afternoon and we had already eaten, so we weren’t in Breakfast Whiskey territory. We weren’t even the first people there.

We bought a flight of Tasmanian whiskies from a 23-year old who knew way more about whisky than we ever will. I wouldn’t say they are up to Scottish standards, but it’s clear that they are on their way (they are certainly winning plenty of awards!). 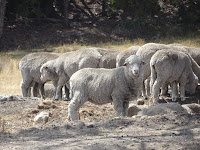 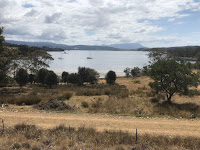 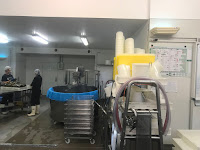 Merino sheep, and the 'House of Whisky' were right by the anchorage
We hitched a ride to the Bruny Island Cheese and Beer Co.

That didn’t take nearly long enough, so we started walking south with our thumbs out. In no time, a local woman dropped us at the Bruny Island Cheese Company. We weren’t planning on staying, but the food smelled really good. Also, they have their own microbrewery (the Bruny Island Beer Company). {Maryanne: Bruny Island is way bigger than we'd anticipated at 50km/30miles long, we should/could have spent much more time there, especially in the southern national parks. We made the most of a day ashore from our protected anchorage and didn't venture beyond the narrow 'neck' that divides the North and South of the island.}

Whew! We needed to walk that off, so we kept heading south again. Another local picked us up and drove us to The Neck - the spot where North and South Bruny are joined by a narrow isthmus of sand. There, we got long views in both directions, including the high cliffs of South Bruny. 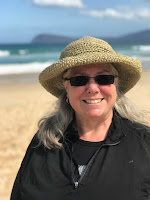 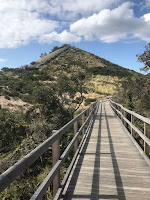 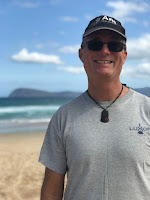 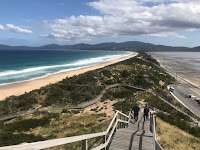 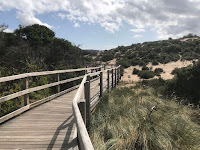 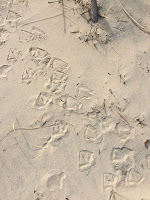 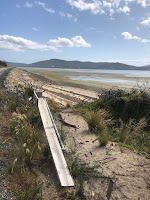 A bit more walking and two rides later, we were back at Begonia, where we finished our day with a tour around the anchorage to introduce ourselves to the two new arrivals in the cove.

We had started off thinking we would have an easy day of a whisky tasting and a short walk, but had managed to stretch it into a whole busy day of seeing much of the island and meeting lots of people. It seems like we’re due for another rest day...

[Maryanne]There is no public transport on the island, and despite being anchored within a mile of the ferry terminal there is also no opportunity to rent a car or anything. We resorted to hitch-hiking and never seemed to wait long. We were picked up by locals and visitors: Stephanie, who is currently planning for a wedding in March 2020); Norm (a retired psychiatric nurse); Joe (a very young father who sold his oyster business to spend time and make memories with his young family; and visitors returning to the ferry: Ali and Rajesh (extra happy Pakistani immigrants running a lumber supply business in Sydney who were visiting Bruny Island as part of a 'working' holiday).

The people on the island are remarkably entrepreneurial. There is lots of farming (including merino sheep, honey, & oysters), and lots of firsts for the state and country including the first to make whisky (Lark distillery - winning international awards), the first (in the world) to make vodka from sheep whey - and they have won a ton of awards in 'best vodka' category for that quirky achievement, they have numerous vineyards, and (of course a healthy tourist industry for their scenery and wildlife. Not bad for an island off an island off the far SW of Australia}.