[Kyle]More big winds was coming to southeastern Tassie. It was supposed to be worse the further south and west we were, so we decided to continue north and east. We pulled up a giant ball of seaweed with an anchor in the middle of it and headed out. We were right in front of the other two boats in Recherche. 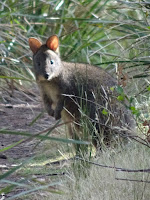 The wind hit almost as soon as we exited the bay. It started at twenty knots, but soon rose to forty. That is probably too much wind for any sail. We were going across the wind, so I left just a scrap of jib out to keep us moving so I could steer. The other two boats kept their sails stowed and elected to motor instead.

About five miles north, the wind started to abate a little. Gradually, I unrolled more and more jib until it was fully out. The monohull behind us did the same.

Our course took us just a little too close to Rossel Point, on the northern side of Southport Harbour. We got there first. The wind in the lee of the point died and then started swirling around faster than I could steer to compensate for it. We gybed and gybed again, and then tacked and tacked again with no ability to get up enough speed to steer a straight line. The wind seemed determined to put us directly in the path of the approaching monohull.

Just before they would have had to veer out of the way to keep from hitting us, even though we were technically the give way vessel, they ran out of speed and suffered the same treatment as us.

What ensued was a comical, super-slow speed near-collision. We both drifted helplessly towards each other while spinning in circles as we tried to harness enough wind to move.

Then we suddenly got hit with a ten second blast of fifteen knot winds, which allowed us to put some distance between the two of us. We got hit with another and then another and pretty soon, we were zooming away as if the whole thing hadn’t happened.

The same events repeated as we passed Esperance Bay. We stopped again, but the monohull was on a diverging course that took them further from land, so they never lost the wind completely. By the time we had made it through, they were halfway to the horizon.

At Huon Bay, the terrain bent our crosswind into a strong headwind and we decided we had had it for the day. We pulled into Randalls Bay, where we were just able to tuck behind the protection of the sandstone bluff that cradles the bay like a protective arm. It was windy and choppy outside, but we had flat water and light zephyrs where we were. We even had clear skies for a nice sunset. 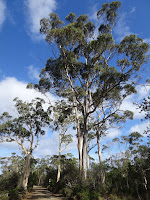 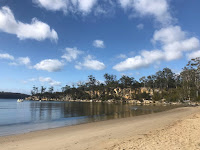 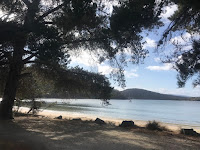 We spend a couple of days aboard being pushed around by the wind
(a screenshot from our anchor alarm app)
Until we could finally get ashore. Blue skies at last!

After a couple of really rainy, windy days, we ventured ashore for a hike. We started at the strangely named Echo Sugarloaf Conservation Area. They have a new trail to the summit of the hill of the same name (it looked nothing like a sugarloaf). It was a pleasant stroll. The easy path made its way through eucalyptus woods and grassland to the top. The best thing was that we were there early in the day, so the critters had yet to scatter to their hidey holes. We saw several Pademelons, which are the smaller end of the macropod family that contains kangaroos and wallabies. Kangaroos are basically deer sized. Wallabies are like big retrievers or even Great Danes. Pademelons are terrier-sized. Whereas kangaroos are decidedly lanky, Pademelons are comparatively cute little puff balls. 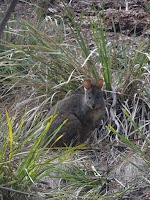 At the top, we also ran into one of the locals (Paul Thomas) who helped plan, build and maintain the trail. He gave us a few suggestions for other local places to add to our walk. 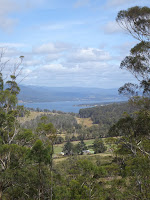 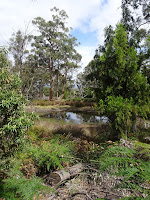 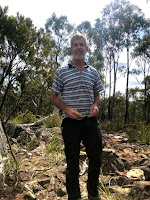 Following Paul's advice, we walked the long way along the coastal path to Eggs and Bacon Bay. Eggs and Bacon would undoubtedly be a great address to tell people you have. It’s named after a flower that (colour wise) looks like eggs and streaky bacon; it is common in this one bay, but rare everywhere else . On the day we were there, it seemed like a remote and windswept place with a somewhat stinky, kelp-strewn beach. 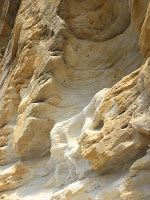 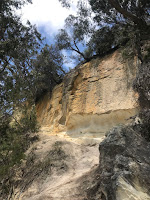 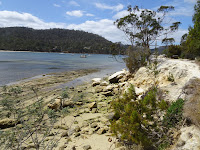 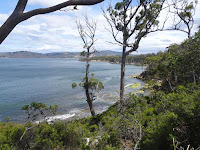 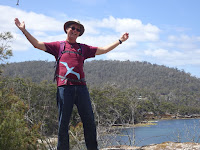 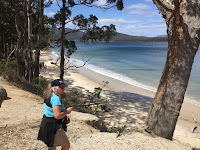 Walking west along the coastline trails

On the walk there, though, we did get to see some lovely beaches and even spotted a few of the rare local Swift Parrots. They kept buzzing us at close range and refusing to sit still for a portrait. We finally had one that landed right in front of Maryanne and posed for her. That’s when her camera quit. She had it back in order ten seconds later, but that was one second too late. Doesn’t that just figure?