[Kyle]The weather had definitely NOT improved by waiting another day in Bramble Cove (back in Port Davey). The observations and forecasts indicated the wave height was at least decreasing. Behind the current system was yet another bad Southern Ocean storm bearing down on us. We decided to get out before that one hit. 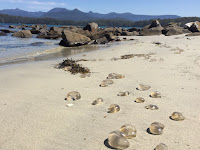 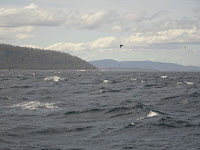 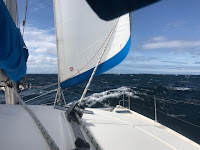 Gloom and Drizzle slowly gave way to blue sky, but the seas were a bit bouncy

It was a pretty miserable day. The wind was almost thirty knots, with gusts to almost forty. With only twelve square meters of jib (just under a third of its total area) and the mainsail stowed, we were easily able to sail between eight and ten knots. The seas were down to three and a half meters (twelve feet), but they were nice and long, with crests almost a tenth of a mile apart. We made a point of staying in deep water where they wouldn’t bunch up and start breaking as the bottom rises and the currents start swirling near land. Of course, the wind was stronger out there, but it was still a better ride.

That was, of course, once we managed to beat our way out of Port Davey and make it to the first downwind turn. That was a pretty miserable leg. It was made worse by fog and cold rain mixing with the sea water the bows were scooping up and sending over the decks to the cockpit.

This is when I discovered that my foul weather trousers were no longer waterproof. They are composed of an outer layer, a water barrier and a lining. The water barrier had apparently passed the warranty expiration date because all of the little molecules spontaneously stopped holding hands. We later realized that all of the weird white powder we have been finding all over the boat had once been former waterproofing and was deposited by my pant legs. I had worn jeans underneath, expecting them to stay dry. They were now soaked, but at least the outer layers of my foul weather pants were keeping them warm and soaked. My top was okay, but after several hours, capillary action had wicked the water upwards, making all of my dry clothes as wet as the jeans.

The rain was less like big drops and more of a heavy mist that swirled around corners into every crevice. It crawled into my hood, landed on my ears and dripped down my neck. It soaked the underside of the bimini, which then added its drips to the symphony of wetness.

Maryanne kept offering to take over and give me a break from it all. She was still dry. I figured there was no point in tracking water all into the interior, so I settled for the occasional hot drink being handed out instead.

As we passed by Maatsuyker Island, at about the middle of the southern coast, the wind picked up even more. We rolled the jib down to three square meters, but were still regularly surfing above ten knots. It went from raining all of the time to raining most of the time. Little patches of blue sky raced by and gradually grew larger than the cloudy bits.

We rounded Cape Bruny into the lee of the land. Almost instantly, the day changed character. The skies were clear, the waves were rapidly decreasing and the now warm breeze coming off of the land smelled strongly of eucalyptus. 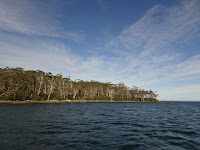 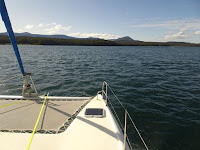 We turned a corner; the weather improved
We were at anchor in time for a stunning sunset.

We pulled into the unfortunately named arm of Recherche Bay called The Pigsties. It is actually very pretty. It is surrounded with State Park land bristling with old-growth Gum trees. Their slender branches spread out to form a high canopy over the undergrowth. Next to us was a small cluster of houses ambitiously marked as a village on the chart.

After the previous day’s winds blew out, we took the dinghy ashore there for a long walk around the perimeter of the bay. Our walk was on a well graded dirt road. It was such an improvement over our previous hikes that we breezed through the “villages” of Moss Glen, Recherche, and even one called Catamaran, which as far as we could tell was only one trailer. At the end of the road, which is as far south as it is possible to drive in Australia, we joined the beach track to Fisher’s Point, mostly just so we knew we had made it to the end end. By the time we had made it to the spectacularly unimpressive navigation beacon at the point, we had walked seven miles from the dinghy. We could see Begonia from there. Most of her hulls were below the horizon. She was only barely visible as a tiny white speck. 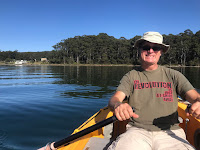 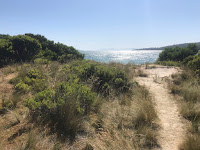 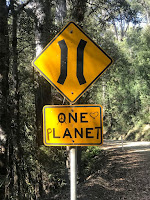 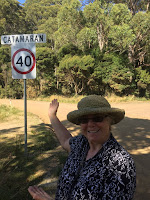 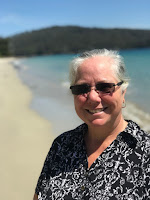 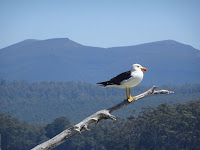 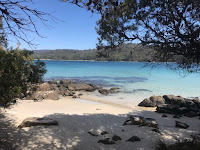 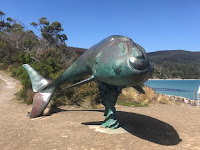 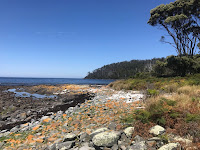 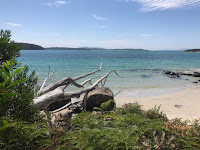 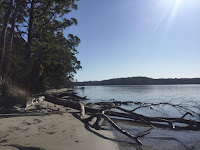 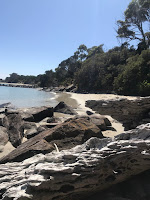 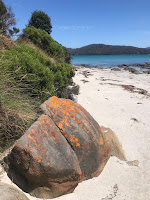 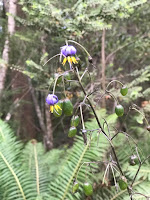 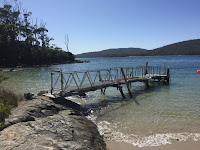 A long and rewarding walk around the bay,
a bit of history and plenty of scenery and nature to enjoy.
The last picture is of washed-ashore Moon-snail eggs: Commonly known as ‘sausage blubbers’

The walk home was going okay for a while. At about mile twelve, we started getting sore and slowing down. By the time we made it to the dinghy, we were both counting the steps. I can’t believe I used to RUN marathons.