First we had a whole lot of laundry to do. Maryanne did that while I carried jugs of water to put in Footprint’s tanks so that I could finish testing the water system. Again, everything is good. I carried a couple more so that Maryanne would at least be able to do dishes aboard while I was at work. I do spoil her.

For the second half of the day, we took the ferry over to Oban and checked into a nice hotel, where the first thing we did was take three showers (me) and a long , hot bath (Maryanne). Once we were all soft and smooth and fresh smelling, we drove to the nearby village of Connel for a really nice dinner at a cozy pub on the water at a table next to a big, warm fireplace. When one of the servers came by and asked how the food was, Maryanne commented that the mushroom soup was the best she’d had and asked either who made it or where did they get it. Our server said, “That’s the guy you want to talk to at the bar. He made it.”

The guy noticed us talking about him and asked what was up.

“I was talking to this lady about your soup.” Our server said, “She says it’s rubbish!” Then he walked off.

Poor Maryanne was mortified and immediately began protesting. The whole place cracked up. The cook, grinning with pride, came by and told Maryanne his recipe. Then he went into the back and came out with a written copy for her. Whoo-hoo! 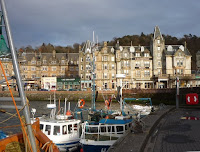 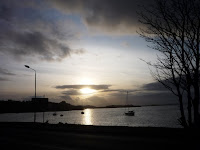 We went back to our snug hotel room with its fluffy sheets and shared a bottle of wine while talking about the last seven years. It was a nice treat after all of that hard work.
Posted by SV-Footprint at 4:54:00 PM

It's so good to have you back at the Blog. Oban is beautiful. I'm so pleased to hear that in spite of the grime and algae, Footprint withstood your absence in pretty good shape. Welcome back--now I have something to look forward to again--more posts and great photos!

We'll be joining you guys there as soon as we can. It sounds, well, just as we might have expected. We know that our decision to book into the Oban YHA for a week will be the right one for us old codgers.