Last of the mainland

[Kyle]With first light of day we left Paestum beach in a building tail wind. As we exited the Gulf of Solerno the wind shifted to one side and Footprint kicked up her heels. For the next few hours we sailed in perfect conditions for our boat – 20kt quartering tail winds in a smooth sea. As a precaution against gusts off the mountains we put an unnecessary reef in each sail, yet still we flew down the picturesque coast. At the edge of the water here it is much greener than we expected for hot dry southern Italy, and the coast is dotted with pretty clusters of houses looking like the perfect B&B get away locations from which to wander through the villages and along the beaches. Around noon the wind abruptly stopped and we slowly drifted to a halt. Over the next couple of hours we coaxed occasional motion from the breaths of wind until we were across from the harbor at Palinuro.

No sooner had I gone in for a brief recovery nap from our early start than Maryanne had the boat moving at full speed again under main and screacher. Beyond the village a lighthouse stood way up atop a high, steep, cliff. We doused sails, started the engine and headed into the dramatic cove walled in by cliffs and unexpectedly populated with boaters and beach lovers already settled in place. There were a dozen other boats, almost entirely Italian but of various types (from pedalos to luxury power yachts), another American and a French sailboat too. We made our way toward the beach and dropped anchor short of the buoyed off protected swim area.

After securing the boat my first order of business was to swim under the guise of checking the anchor. But really it was hot and the clear blue water was too inviting to pass up. After the comforting sight of our anchor chain disappearing into the sand, re-emerging a few feet later at the trip line (i.e. completely buried in) I swam over to the cliffs to explore. The sea-life has been pretty scarce for our Mediterranean snorkels (high salinity and low circulation), but I found a few small schools of fish, some shellfish along the bottom, plenty of urchins, and an isolated patch of long armed anemones which my marine biologist wife tells me can only live in the healthiest of environments.

Further along at the cliffs I explored a few caves and at the last surprised a two foot long Moray eel which being corned in the cave beyond me gave the look of fear and defense, it coiled like a snake preparing to strike with mouth agape, telling me I needed to back off (which I did despite not yet being close enough for any real danger). He made his way out of the cave in formation with me as we each hugged different walls to the exit, and soon found an indentation to retreat to, coiling and attempting to look invisible. I humored him allowing him to think he’d escaped my view, while myself being glad to have escaped from him. 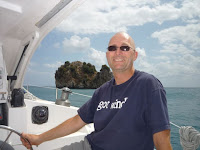 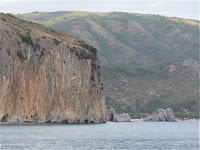 Relaxing Recovery time at Palinuro anchorage
Sufficiently refreshed I returned to Footprint for dinner and a glass of wine while watching the beach and anchorage gradually thin out. In Italy most boats in the anchorages seem to be day-trippers using the boat as a base for sunbathing before returning to the marina for the night. This cove was eventually left to just us and a handful of boats standing as sentinels over the empty beach.
Posted by SV-Footprint at 3:09:00 AM

Ok, the moray eel would have scared the CRAP out of me! You're braver than I ever thought of being!