[Kyle]The time finally came for us to leave our winter home in Weehawken. A couple of weeks earlier, the bitter cold of winter finally broke and we had a few days of gorgeous spring weather. The boaters in the marina emerged from their cabins bleary-eyed and disoriented like bears coming out of hibernation. Suddenly, the outside of the boats became useable. On Begonia, we ate in the cockpit. It was as if our cabin had doubled. Our Webasto heater went from being needed continuously when we were home to just taking the initial chill out if the early morning air. I finally was able to do my morning runs along the Hudson in shorts.

Unfortunately, it didn’t last. By the time we actually set off, winter was once again winning the battle and doing things outside could only be accomplished after prodigious bundling up first. Several people wondered out loud why we didn’t just wait until it was nice again before taking off. The main one is that docking rates in the marina are WAY higher in the summer. Staying for even one more month would cost us more than we had paid for the entire winter. As much as we love it, New York is not a place we can afford to be in the summer. The other main reason is that I still have to work. Time off from there is increasingly difficult to get and I have to make the best with what I can, even if it’s not ideal. With limited time off, we have fewer sailing days, effectively making us slower cruisers. The best way to make the most of the summer sailing season is to start early and sail farther per day than we would generally like so that we have time left over to see the places we go.

When my big block of days off work started, the wind was mostly forecast to be strong and against us with the exception of two widely separated days worth of strong tailwinds. My initial plan for our next leg to Boston was to do short to medium day sails for a week, anchoring along the way every night. The latest forecast made it pretty clear that most of these days were going to be long, miserable bashes into the wind. The new plan changed to sailing straight through to the fifth stop, anchor for a couple of days to wait out headwinds, then make another big dash into Boston before we got pinned down again.

In order to do this, we needed to leave at the first slack water after I got home. I arrived late and exhausted after a day of weather delays and only had time for a fitful hour and a half nap before I had to get up again and get going. Maryanne had completed almost the entire departure checklist the day before, so there was little left to do except make a big pot of coffee, give the weather one last check and untie the lines. As the appointed time arrived, our friends from F-dock, Andy and Robin from Sotito and Michael from Justine arrived to wish us bon voyage, give us big hugs and help cast off our lines. Robin had also made us a box of cookies to keep us going for the journey. Earlier in the week our friend Kate had also sent us a cake; we would not be hungry.

We were in the river just as the ferries started for the day. We had escaped having to ride out their wakes in the marina while Begonia surged back and forth. We got our big mainsail up and were quickly dashing down the Hudson and making the turn at The Battery into the East River. Manhattan is so beautiful from the water.

Leaving Weehawken at slack water unfortunately put us in the East river right at maximum ebb. The buildings of Manhattan blocked most of the wind. What was left seemed to swirl in from every direction. We tacked a few times, jibed a lot, had great burst of speed forward followed by being pushed backward by the strong current. Ordinarily, I would patiently play the wind’s game until the current reversed in our favor, but I couldn’t stop thinking about how far we had to get and how all of the good wind in Long Island Sound wasn’t going to be there much longer. I started the starboard engine to “help” our poor confused mainsail. This gave us steady, albeit slow progress forward. We inched our way through Hell Gate and made the transition into the sound. Passing La Guardia airport, the wind steadied and we were finally able to shut down the engine. The wind increased as the current died off, then grew in our favor, catapulting us into the sound, where the water changed from ugly brown to a clear, pale green, and bringing smiles to our faces. 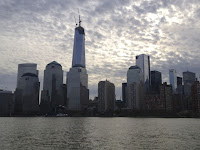 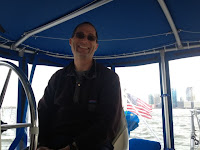 As I watched the New York skyline recede, It was strange to realize that it would be a very long time before we would see it from Begonia again. Our minds trick us into thinking New York is a natural stop on the way back south because it is along the coast. The truth is that New York is at the end of a pretty big indentation in that coast. It is actually much shorter to take the offshore cut across the gap. New York ends up being significantly out of the way. If the weather were just so and I had more time off from work than I do, we could make it happen on the way back south, but probably not.

We managed a brief chat on the radio with our friend Mark as we sailed past City Island. He was stuck ashore repairing Hurricane Sandy damage at his yacht club on City Island. Late into the afternoon, as we made it into the big open part of the sound, the wind began to decrease and the current once again turned against us. Our average speed dropped and dropped. I had a running calculation in my head of the average speed needed to get us to our intended anchorage before dark the next day. This calculation was requiring a greater and greater level of optimism for success. The current would turn in our favor again and there was still plenty of time before the sunset after next, so I decided to wait it out for a while and reserve any possible panic for later.

By nightfall, I had had it. Two days of almost no sleep was getting to me and I had to turn in. As I went below, I asked Maryanne to try to speed it up a bit. She did just that. As I climbed into bed, the faint gurgle of the water past the hull changed to a whoosh, and then a hiss. Begonia’s motion increased. To the rushing water were added strange bangs and clunks that are still new to me – the only time I’ve ever slept on this boat while underway was the two-day trip from Ft. Lauderdale to Charleston almost a year before. In spite of the fact that I was exhausted, the strange noises and the worry about what they were and how Maryanne was faring kept me from sleeping except in the briefest non-rejuvenating naps. Later on, I could hear the wind in the rigging. Begonia would shake and I would hear Maryanne going on deck to reef the flogging sails before sheeting them in and rocketing off again. 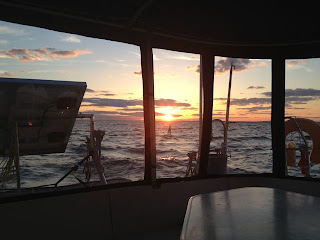 Sunset on passage, feels like we have the world to ourselves

I came back on watch at 1am to find Maryanne sailing us through choppy seas at double-digit speeds. Begonia sped up a couple of knots more over the next hour and then stayed there all night. We passed our original day two anchorage at 3am and were screaming past the third at sunrise. Around number four, the wind finally gave out, and then slowly built against us.

We fired up the starboard engine again for the last push to our day five anchorage in Onset Bay just on the western side of the Cape Cod Canal. As the headwind increased, so did the drag our poor engine had to overcome and we slowed and slowed. I suspected our prop was also a little foul with growth, but it will still be several weeks before it will be warm enough for me to go overboard and clean it.

We finally made it to our anchorage, and Onset Bay, with an hour or so of daylight left. The last time we anchored here was in Footprint over four years ago as we went south in the height of the season. Back then, the entire bay was packed with boats at mooring and at anchor and we had to shoehorn ourselves into a spot too shallow for most others. This time, we were the only boat in the entire bay. Most of the mooring fields still had small marker floats in place of the real mooring balls. The trees were still mostly bare, just starting to bud. 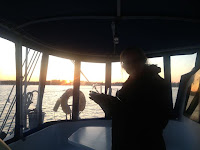 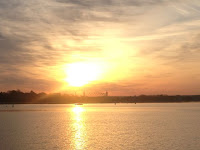 Sunset drinks before collapsing in rest, and Kyle manages to catch the sunrise the following morning... not a bad home fo a couple of days.

We found a spot and dropped anchor. Since we had all of the room we wanted, we put out an extra 20’ of chain for insurance and after a celebratory glass of wine with a beautiful sunset we collapsed into our bed in an exhausted heap. We managed to emerge the next day just before noon to bright sunlight and strong winds in just the wrong direction for the next leg. There was frost on the decks and it was cold inside. With all of that wind and sun, we had all of the power we needed to run the heat for a nice toasty off day together. Finally, we are cruisers again.

yes, you are cruisers again! i know everyone who knows you and maryanne is thrilled to read this. you both spent more than year working to get back to it, so ENJOY.