The Trip Back to Norfolk

[Kyle]As soon as Charlie was done looking over the rig, we left Deltaville for the overnight sail into Norfolk. 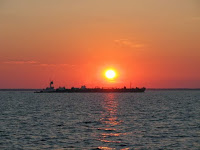 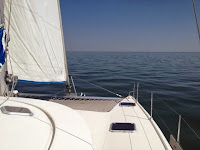 A straightforward (but zig-zag) sail down the bay overnight; sharing the bay at sunset

The wind was initially so light that it would probably be more properly called just air. Most of our speed was from the current, which moved us through the air just fast enough for the sails to give us a tiny enough amount of forward speed that we could at least point the boat in the direction we were trying to go.

After a few hours of this, the wind finally filled in from the exact direction of Norfolk. We expected this until the around sunrise, then we would have a few hours of tailwinds before it dropped off to nuttin’. If we were going to have any wind at all, we needed to be sailing all night.

The Bay was more than wide enough to allow us the luxury of nice long tacks. There was just enough activity to keep the person on watch alert while not being too much for the off watch to sleep.

The waves in the bay weren’t too big, so Begonia was able to stay ahead of plan. We did so well, in fact, that we made it all of the way to Norfolk before the tailwind kicked in. We had the anchor down at the Hospital Point anchorage just after sunrise and then slept most of the day to make up for being up most of the night. 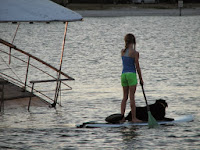 While Begonia is safe, there are sunken boats in the anchorage that are making everyone a little curious
Posted by SV-Footprint at 4:54:00 PM