Passage in the Pacific - Day 11

Weather: [We had a little more sunshine yesterday but it is still (sadly) mostly overcast. I'm sure we'll find a tropical paradise sooner or later, but we'd expected to be there by now!]

Sailing conditions: [Seas are surprisingly flat, and wind remains favorable/useful. Currently sailing a beam reach to the SW with the wind from the south]

Food: [Egg Sandwiches for lunch, and Pasta for dinner... We normally eat pasta 3-4 times a week and this is the first time we've had it on this passage. Kyle has been asking WHEN are we going to have pasta? but I've wanted to be sure we use our fresh provisions before they need to be thrown out (due to rot or legislation); there is much we cannot take into Galapagos with us that must be eaten or discarded before we arrive.]

General Comments: [Given the (current) weather forecasts it looks as though a stop in the Galapagos is ON, I'm very excited and trying to make that cautiously excited. Yes, we are now in the Southern Pacific. We crossed the equator just before sunset yesterday (YAY!), a first for us and the boat. I bullied Kyle into a ceremony/toast to Neptune (which he eventually enjoyed)... Twilight only lasted about 20 minutes. The night-time bio-luminescence is AMAZING with the back of the boat creating rocket trails through the water, it's just magical to watch. Not much to see otherwise, the occasional bird circles us and moves on. Occasionally we see other boats on the AIS that are too far to see clearly by eye.]

Updated after the fact.. 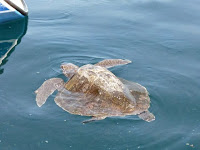 Turtles visit as we move so slowly through the water, and my favourite picture of Kyle sailing

[Kyle]Day eight was another no wind day, where we were barely able to keep enough water going over Begonia’s rudders to keep her at least pointed in the right direction. The sun finally came out though, so that tempered our disappointment with the wind.

At around noon we came across a large patch of trash and slime where two different currents converged. It was a disheartening sight, soda bottles, potato chip bags and miscellaneous plastic junk floating in a thin oily slime that was green with algae.

We spotted a big sea turtle from a distance he looked like he was entangled in something so we altered course and crept over to take a better look. I thought he would startle when we got too close, but he seemed completely unbothered by our presence. We were able to get within a couple of feet of him before being sure he was fine; he was just enjoying a meal of garbage slime – yuk.

Over the next couple of hours we saw dozens of turtles, all were completely indifferent to our presence. Begonia was moving along at well under a knot, but I still expected the sight of such a large thing approaching and casting them in shadow would make them at least a little nervous. I passed one so closely that Begonia actually rubbed one of his flippers for 20ft or so. There was no reaction at all. A couple of others passed between the hulls, never pausing in their foraging.

Later on we also saw about four groups of about seven or eight pilot whales each. These are members of the delphinius family between the size of other dolphins and orcas. The were mostly off in the middle distance, breaching and smacking their flukes in the water to stun the fish on which they were feeding. One group stopped what they were doing and came close enough for me to identify them.

On the ninth day, a 6kt wind filled in from the south-south-east and stayed there. After five days of tacking back and forth in light air we were finally able to point Begonia at the Galápagos and pick up some speed, putting miles between us and the South American mainland, and allowing us to finally start ticking off minutes of longitude in earnest. 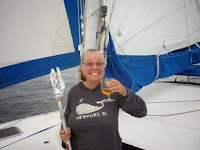 Having fun with our first equator crossing under sail
Posted by SV-Footprint at 8:31:00 AM