[Kyle]As we were finishing off our beers after collecting our passports, a man came in from the street walked over to our table and started showing us photos of smiling people climbing and spelunking in lava tunnels. He then gave us his card: he did tours, would we like one? As a matter of fact we would. Maryanne explained in Spanish that we were busy snorkeling tomorrow, but we would like to see the Sierra Negra volcano on Thursday if possible… “Si, no problem”. Brilliant! We made plans to meet with him on Thursday. As he was leaving, Maryanne asked “Unless you have something this afternoon?”. He smiled, “no, no es possible hoy”. OK, no problems.

Five minutes later he returned and said we COULD go today, a driver would pick us up in 20 minutes. Brilliant.

Indeed 20 minutes later a guy in a five seat pickup truck swung by. We paid our bill at the restaurant and climbed aboard the truck. We stopped off at a backpackers’ hostel and picked up four more people: three girls and a guy who seemed to be oh… 20. I slid over, one of the girls joined us on the back seat but acknowledged our presence with the exact minimum effort possible.

We were soon out of town and speeding across the imposing cracked and rippled landscape. The girl next to me immediately fell asleep (stuff like that is boring!). The truck left the lava and headed up the lush sides of Sierra Negra. After a few miles the driver stopped in the middle of the road, our guide climbed out of the truck bed and opened our doors. We were standing around having a look at the place (it was just nowhere on a road), and noticed our guide was GONE. He was spotted almost at the next crest of the hilly road and receding fast. We each gave chase, but it was a struggle to keep up, much less close the gap. I’m in reasonably good shape (what with the running and all) but I was at my limits just trying to keep sight of him. The others fell behind, spaced out and in our own private hell, each trying to keep sight of the person ahead. I could just barely see the guide, Maryanne could barely see me, and so on. A couple of times I saw our guide resting, but he took off as soon as he glimpsed me (with no regard for the other stragglers)! Eventually we decided to cease to keep up this crazy pace and encourage him to keep on waiting on us. 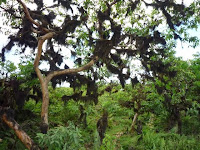 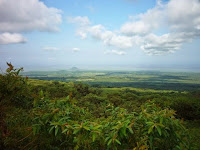 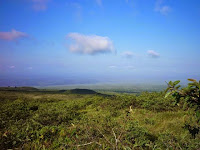 Follow that guy - where is he? On the lush hike there were at least occasional views of the land below (but no real time to appreciate them)

Maryanne caught up to me, she had grazed her arm on a barbed wire fence and was bleeding through her white cotton shirt. It wasn’t serious, and Maryanne was able to clean it with supplies from her backpack, but the small amount of blood made a huge mess that looked serious. We caught up to our guide, he looked at us as we panted heavily, looked at Maryanne’s arm, and without comment or expression took off again. We figured me MUST have a first aid kit in his pack, and he would at least offer a band aid, but he just kept steaming up the hill.

Some of the others started to catch up with us, the poor things. They had been led to believe there would be almost no walking, that the truck would take them practically to the top! Just running? Ha! Two of them were wearing flip flops, and this was NOT flip-flop terrain. They turned out to be students volunteering on the islands collecting data for scientists. Some of which involved shovels.

Every few weeks they would get a few days off from their volunteering, and they would use that to explore a different Galápagos island.

Our climb got steeper still, we stepped through a gap in the trees, and … WHOA! 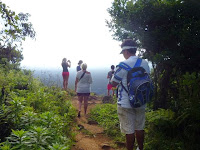 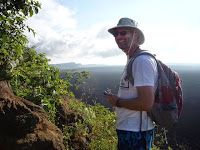 We were standing on the edge of a giant caldera, it was immense (7.2 x 9.3 km). It looked like a mini version of Ngorongoro Crater, but rather than herds of wilder beast, this caldera floor was covered with a flat cooled layer of lava that looked like cracked custard (it certainly didn’t look like a comfortable walking surface) Some areas were still smoldering. This lava was from the October 2005 eruption, and so far not a hint of life had taken hold on its surface. We all stood there transfixed by it, that march was actually worth it! We all silently agreed that our guide could now live, at least until we got back to the truck.

It was during our blissful awe of the caldera that our guide started taking photos of us. Oh, I knew what this was – he was going to put them on his web site as examples of happy customers. I did my best not to smile (well, maybe a little one sneaked out). 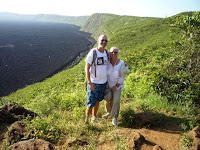 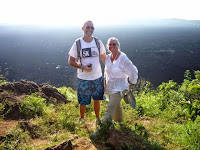 The trip down was much the same as the one up, only with more falling. We could not see where we were putting our feet in the dense growth.

Back at the truck, we all piled in exhausted, without saying anything. All right, we’ll get into town first, and then we’ll tell him! By the time we pulled up to the backpackers hotel, where we all got out, I think we’d all decided that life was too short and Ecuadorian jails were probably not fun. Fine! We’ll let you go, but we are not coming back!

As we reluctantly paid our fee (that seemed to be double everyone elses’, and we knew that the traditional tour walks the full caldera rim (this one was abbreviated due to the lateness)), our guide suggested that since we had now seen Sierra Negra, we could go spelunking on Thursday instead. Great! “What are we doing?”. Fine, we’ll go back, but only once. That will teach him. We've spent so much time, money and effort just to get here, it seems crazy to worry about a few dollars now.

{Maryanne: Aside from the WOW of the view, the rapid pace, and the barbed wire incident, it seems that Kyle has a completely different memory of events than I do... We'll go with his version.}