[Maryanne]After fully resting with a couple of days on the boat enjoying the views, we ventured into Hilo to visit the market, and waterfalls... It turned out to be a long walk! 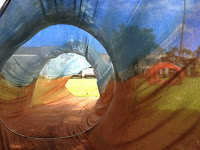 Some interesting art in the local park, and a scene from the market 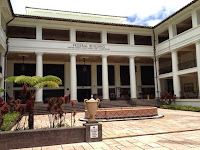 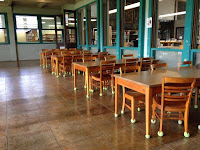 The local post office and library are open to the elements, quite novel, and the library seems to go to great effort to keep the noise down!

[Kyle]Okay, so we rented a car. That means 26-hour days of sightseeing and re-provisioning. There is so much stuff to do here. For example, we did a big one-month grocery stop at 11p.m. after driving all over the island.

With that said, I’m going to keep it short. Enjoy the pictures.

The first place we took the car was Hawai’i Volcanoes National Park. The area covered by fresh lava is immense. The main tourist stops were pretty cool, but the best stuff was off of the beaten path at Pu’u Huluhulu. What an incredible landscape of amazing shapes. I don’t think we stood on ground older than us all day. 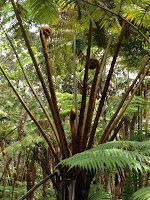 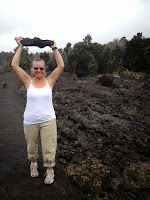 The plants are hairy and the rocks weigh little 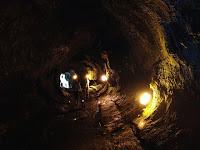 The lava forms are so varied, and there are even lava tunnels to explore 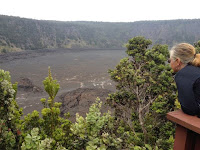 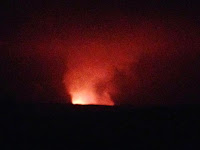 Plenty of reminders that we are atop a live volcano (gulp)! 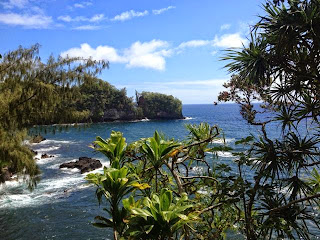 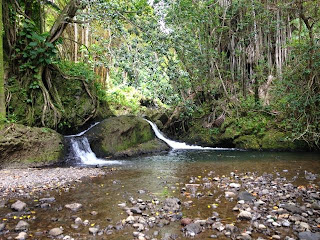 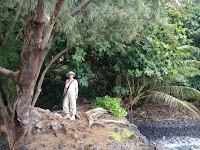 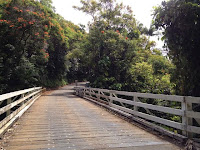 Spending time in at every scenic drive and overlook on route to the North of the island. We came too close to being hit by falling mangoes at the botanical gardens

Day 2 with the car had us driving all of the way up to the Waipoo overlook at the northern tip of the island, driving through Irish-looking cattle country along the way. 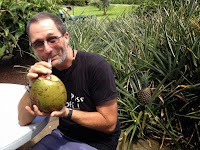 After a brief rest for ice cold coconut juice we arrived at Akaka waterfall. Amazingly there is a fish that actually climbs this thing to spawn.. it has suckers to climb the wall

We stopped at several waterfalls and pretty beach spots as well, including Akaka Falls, with its 412-foot drop. 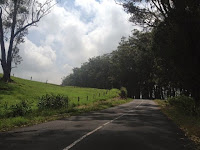 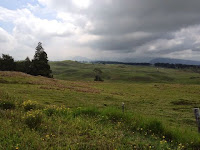 Statue of King Kamehameha I (this one recovered from the seabed, now in Hawi), and a typical Hawaiian town architecture (this one is Honomu where we picked up sandwiches and cakes from the bakery for a picnic) 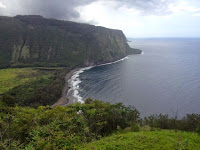 We drove back over the Mauna Kea saddle road. Pretty much the whole southbound drive was in perilous fog with no more than two car lengths visibility. We did make it back in time to sample the excellent pizza from Pizza Hawai’i. Their food was really good, but overhearing the guy answering the phone made me realize that being one of their delivery drivers must be one of the worst jobs in town, what with the sixteen-letter Hawaiian names for both the customers and the roads and the fact that a lot of their customers are high.

We spent the next couple of days with a friend of mine from work and his wife, Doug and Catherine Wingate, who have lived here since 2008.

We started with an evening of catching up at Catherine’s beautiful office over takeout from Pizza Hawai’i. That was totally okay with us. We got to try two of their other flavors.

The next day, they picked us up early for a trip to the Maku’u Craft and Farmers Market. We got to see a good sampling of the local hippie population as well as stock up on some delicious new local produce, all whilst being entertained by a local ukulele group. 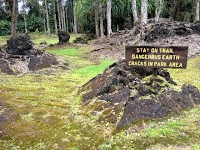 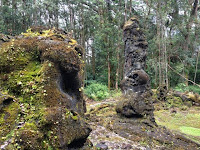 Lava Tree State Park (flying lava sticks to trees and cools before having chance to drip down to the ground level; the trees have no chance!)

They then drove us to Lava Tree State Monument and a place called End of the Road, where the Village of Kalapana was overrun by lava in 1990, destroying whole subdivisions and the access road. Now the landscape would look lunar if it weren’t for all of the green of palm tree saplings. At the end of a short trail is a beautiful black sand beach being made by the waves pummelling the new lava. 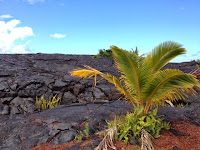 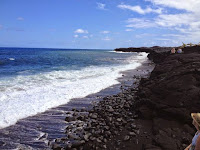 End of the Road, where the town of Kalapana is now buried under more than 50' of lava

We tried to go to the ‘Imiloa Astronomy Center, but it turned out they were closed on Mondays, so we walked down to the excellent Lyman House museum instead. There was so much there that was well done, but one of the best things was a group of students (all adults from a senior center) making feather leis. We had no idea how painstaking and time-consuming that work was. It was really impressive to watch them and great to be able to talk to them and ask questions.

We decided that, since we were walking, we would stop into a kava bar and see what it’s all about. Kava is a mild sedative/anaesthetic that is common in the South Pacific. In many places, a kava ceremony with the chief is practically unavoidable if you want to be allowed to anchor in the bay or go ashore on his island. We’ve heard that it’s pretty revolting, so we thought it would be a good opportunity to try the stuff here, where it’s milder and we don’t have all of the chief’s warriors staring at us. 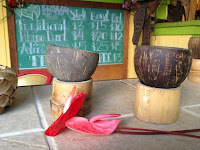 Kava, and meeting Mani on his 80th birthday

It’s not as bad as we had feared. It’s not yummy, but you don’t have to choke it down either. It’s probably on the nastiness scale with cold, weak, burnt, black coffee. Two gulps and it’s over. We ordered two shells. Maryanne got halfway through hers and decided she didn’t like it, so I finished it. I waited long enough to be sure there wasn’t a delayed effect and then had another to see if it would do anything more.

We got talking to the guy next to us, who turned out to be the owner of the only tortilla supplier in Hawai’i. He was really interesting and had lots of stories from his eighty years (including time in England). He bought us another round. Uh, oh.

I had mine and half of Maryanne’s again. We paid our bill and left. Half an hour later, I think I started feeling something. It was as if I had had half a beer on an empty stomach when I was tired anyway. It could very well have been nothing.

What of your wayward rudder? Have you learned to sail so well with one that you don't miss it anymore?