[Kyle]At long last, it was finally here - my last trip at work. It seemed like such a long time since Maryanne and I first figured out a plan that would allow us to retire early and go sailing wherever we wanted. Back then it was in the very distant future - too far away to think of in tangible terms. As the time passed I would count down to retirement days in years, and days, and even number of commutes as the date drew nearer. Slowly I'd watch the four digit number of days decline to three digits and then two. Even so, in a way it seems to have sprung up on me. I was headed to work like I always did, from some airport near the boat, and was flying around all week once I got there (like I always had).

This trip was different, it WAS to be the last time. In reality it was a really good week. Probably the best I've had at work in years (if only it could have been like this all along).

Despite having more important things to do, my chief pilot had gone to all sorts of trouble to ensure I had my first officer of choice (Ben), Ben in turn, sacrificed his vacation time to be there with me. During the whole week, I found myself fussed over as people discovered it was my retirement trip - it felt good. Everybody was so nice (knowing they would not have to put up with me for much longer?).

In the middle of the week's pairing, a weather system moved through Chicago (where I'd been primarily flying in and out of) wreaking havoc on the flights and schedules and my crew and I were worried this would disrupt our schedule, or prevent Maryanne from joining me on that last flight. I really wanted Maryanne to be there on my last flight, and she endured all kinds of hassle to get there for me (including taking a red-eye from San Francisco and sleeping in Chicago airport overnight once she arrived there).

My last lay-over was in Flint, Michigan - yeah, I know, I thought the same thing too - but my boss explained that would give me the best chance of a spare seat being available for Maryanne - so Flint it was. There is not much to do nearby the hotel there apart from paying a visit to a nearby microbrewery, so I took the crew out to Lunch and we had a nice afternoon swapping stories and getting excited about the following day.

We had to get up while it was still dark on my last day - of course! - but I only had one flight to do, so It wasn't so bad (I was noticeably more chipper than the rest of my crew that were not so lucky).

Once everyone was boarded (including Maryanne), instead of making the usual PA from the cockpit, I stepped into the aisle at the front of the plane and gave an extended farewell PA - I explained it was a special occasion for me (my retirement flight), I assured the passengers (that generally fret about the size of the plane as they board) they were in good hands (Ben and I were old, and with perfect safety records), they were on statistically the safest airliner in the world, and they should expect an unusual landing treat. I also thanked Ben for keeping me safe all the many times we've flown together in the past. With that, everyone cheered (that doesn't normally happen) and it was on with the work of flying to Newark.

The weather we'd been dealing with for most of the trip had moved off, and it was mercifully a nice, clear, calm day. It was strange, when flying the arrival along the Hudson into Newark (an approach I'd done 1,000s of times) that this would be my last approach and landing in this plane (after over 10,000 hours of flying as Captain in this type). The landing was smooth (thankfully, I didn't need to be embarrassed about any bumps) and through the cockpit door I could hear the cabin cheering.

We landed so early that I was worried I'd beat the fire department - but I hadn't, that was the next big thing I'd been looking forward to. As an honor to retiring pilots, the airport fire department customarily conducts a 'salute' where they fire their water cannons in an arch over the plane as we taxi in. They were waiting for us, and I must say I teared-up a little as we taxied through - and the cabin cheered again.

I parked the plane and set the brake. Outside, on the ramp, people were taking pictures to commemorate my last day. All the Newark management were walking towards the plane. I instinctively thought I must be in some kind of trouble, but then I remembered - what could they do? Fire me? No - they were there to congratulate me. Once everyone was off the plane, I went into the cockpit to have one more look before shutting the power down.

As I entered the crew room, I was met with more applause and cheers; they had decorated and put out a cake and some food and even had a poster of me in my uniform (which I suspect was a result of a conspiracy involving Maryanne and my Mother). It was really nice and really appreciated on my part. Everyone was congratulating me and shaking my hand. The chief pilot (Ann) even made a special play list for the event to be piped through the crew room. We stayed talking and laughing for a couple of hours before it was time for Maryanne and I to leave and head for our flight back to San Francisco. We even got lucky and had seats together (that rarely happens! It has been a good week). 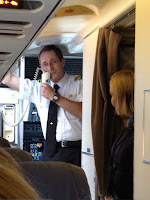 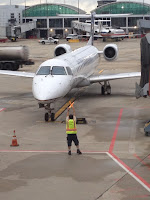 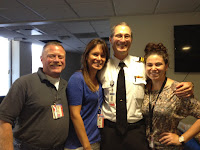 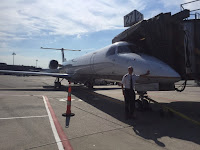 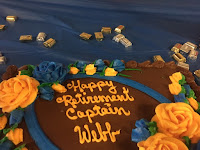 A memorable and special day - thanks for those who shared photos

I extend a big THANK YOU to all the team at ExpressJet that made not only that day so special, but went out of their way over the years to help me attain my dreams both at work and (with extended time off) in so many other adventures. 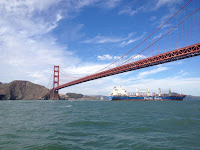 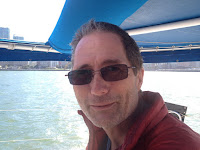 Once Maryanne and I made it back to San Francisco, we were met by Geoffrey, my high school friend, who was in town for business and had extended is stay to celebrate with us. We dined out that evening, and the following lunch time ate at my favorite restaurant Juan's (in Berkeley), followed by a visit to one or two of the pubs around Jack London Square and beyond. While Geoffrey returned home early the next day, we took an overnight/2 day sail before staring the preparation for our next adventure - a trip to the Sierras