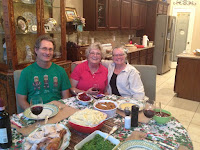 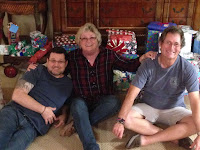 Family Time over Christmas
[Kyle]After many weeks in Arizona soaking up some Mom time, and filling up on holiday foods, the holidays were over and it was time for me and Maryanne to pack up and leave her and Darren to head back to Begonia.

Even though we had all known our departure was coming for a while, as the day neared, it seemed to rush toward us at an ever-increasing pace. Our last night there, on Boxing Day, we all had a good hug and cry over it.

My retirement finally made it possible for us to sail anywhere we wished. However, now we were going to be really far away and would also be without flight benefits (or money) to maintain our former visit frequency of a few times per year. Our next trip to Mom’s would instead likely be several years from now. It was good to be heading back to the boat to resume the adventure, but this time we were all feeling a keener sense of the loss of each other.

We sneaked out of the house when everyone was still sleeping. We had an uneventful drive to San Diego, where I dropped Maryanne and our bags at the border to wait while I returned the car to the airport.

The border crossing was without incident. We walked a couple of blocks past a bunch of cab drivers who really wanted to give us a ride to the bus station, where we boarded the bus to Ensenada. Two hours later, we were in the yard climbing the stairs into Begonia’s cockpit.

The alternating rain and dust in our absence had coated her with streaks of fine mud. She was clean inside, though, until we put down our stuff. Well, that was it – we felt like we were in the yard again.

The next day, we got everything stowed and hosed all of the dust off. That’s better! Except that we still have to get dressed and walk to the bathrooms if we need a midnight pee.

Then came time for last minute provisioning. We were going to be some indeterminately long time before we could get to good stores again, so we spent almost a whole day making our way through a whole host of grocery stores in search of everything for which we might possibly have a need. This beats dismantling an engine, but it still stands squarely on the not fun side of the fun/not fun line.

A lot of people have been asking me how I’m enjoying retirement. So far, it’s a lot of days like this, so I’m still not sure. I am enjoying not having to get flights to work or having my nice schedule arbitrarily turned into an awful one because there’s a cloud in Newark, but I feel like I have yet to realize what it’s like to have a nice lazy day as if it were Sunday, except that it’s Wednesday.

The first thing the next morning, it was time to put Begonia back in the water. She was clean and stocked and ready to go. We had a few last minute things to do once she was in, then we were looking forward to a nice walk along the paseo.

I started the engines, mostly to clear the air out of the cooling water system. Sometimes it loses its prime after a haulout and I have to go bleed the system to get it flowing. There were no problems this time. I slowly increased the rpm to our normal cruise setting, checking on the engines every couple of minutes to see that everything looked fine. After about fifteen minutes, as I checked on the port engine, I found the high-pressure fuel line between the secondary filter and the injector pump had sprung a leak. Fuel was spraying all over the engine compartment. I shut down the engine and closed the shutoff valve. There was a huge mess to clean up and now we couldn’t use that engine or our heat until the line was replaced. Our nice afternoon was canceled. I would be removing the offending part from its difficult to access position while Maryanne called all over town (and the internet) looking for a replacement. 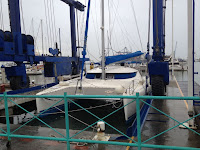 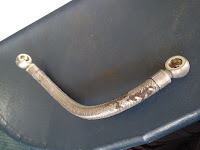 Finally back in the water - only to have a new problem - Doh!
To make matters worse, it was the Friday afternoon before the New Year’s Day long weekend. If she couldn’t find anything, we’d be stuck for a week.

She didn’t find anything.

On New Year’s Eve, it was cold and very rainy all day. We stayed in bed late, mainly because it was warmer there, then we spent the remainder of the day trying to heat up the boat with a lot of steamy cooking while the town skipped it’s celebrations and also hid inside.

Rain slashed at the boat until well into the morning the next day. When it stopped, the whole town flooded onto the waterfront to enjoy their day off. There were no cruise ships docked, so it was just us and half a million Mexicans.

Since Monday the 2nd was a holiday too, we weren’t able to resume our part search until the following day. We found someone who could hopefully have the part in by the end of the week, which left us the rest of the time to do tourist stuff.

We toured museums, visited a good microbrewery (Wendlandt) and also made it to a winery (Santo Tomas) that had some surprisingly good wine. On our last full day in Ensenada, we even rented a car. This made some of the errands we had to do a lot easier, but also gave us time to drive into the nearby wine country (the Guadeloupe Valley where we toured and tasted at L.A. Cetto, and then went on to dine at Hacienda Guadeloupe). We had a great time. The wines were all good, the facilities would not look out of place in Napa, and the scenery was beautiful.

While we had the car we also visited the local 'blowhole' La Bufadora which it seems everyone who visits Ensenada must visit.  The day we arrived the weather was too calm to show off the full force (it is the 2nd largest in the world), but it was the half mile gauntlet of vendors we were required to pass through that tainted the whole experience.  Apparently everyone who goes to visit this natural feature, also requires Tequila, a new handbag and a stash of Viagra and the vendors are quite insistent. 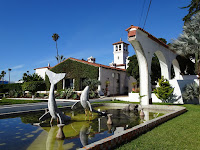 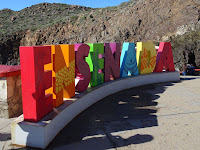 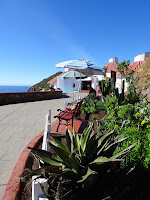 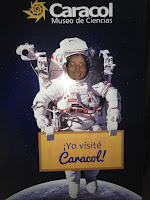 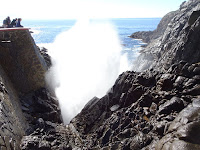 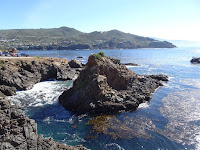 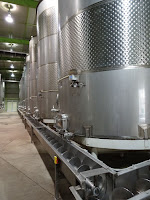 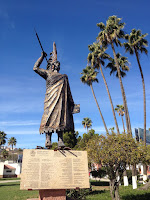 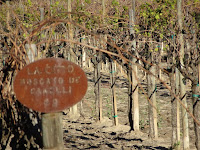 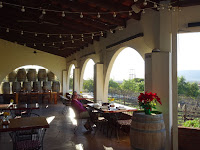 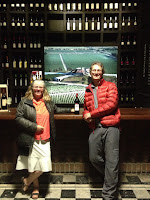 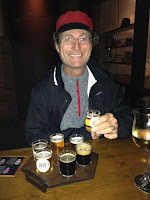 Out and about (on the sunny days) around Ensenada
On the rainy days we hunkered down with Netflix and wondered when our parts would arrive!

I may finally be starting to feel retired!

[Maryanne]We’re also determined to embrace the fact that there is ‘different’ food in Mexico – both in the restaurants and grocery stores, and we want to try a little of everything (although to date the various offals are NOT included in the experimentation). I’ve purchased and cooked up cactus paddles (called nopales here in Mexico). We’ve discovered a great new hot chocolate drink we love (which includes corn flour, giving a a delicious malty taste) called champurrado, and been sampling the street food here too – so far, so good. 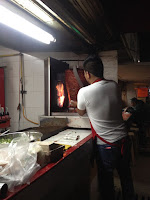 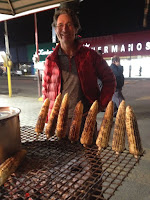 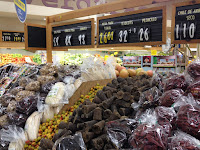 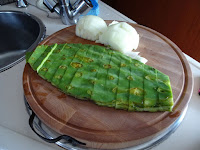 Sampling the food in Mexico

One of the pictures above also showcases a new item that has found its way aboard Begonia - a butcher block - this did not come from Mexico but was hand made by Darren (Kyle’s brother) to fit perfectly over our tiny little galley sinks (a Christmas gift); beautiful quality and wonderfully useful - it brings a smile to my face every time I use it.

Email ThisBlogThis!Share to TwitterShare to FacebookShare to Pinterest
Labels: Boat Life, Mexico, Off Boat Side Trips