[Kyle]We were up very early, hoping to make the most of the daylight. Launching the dinghy was like trying to wrestle an unbroken horse. For a while, it seemed like it was a race between getting us both aboard and pulling both arms out of their sockets. They’re still in.

We rode the surf to a tiny fishing harbor tucked in behind the point, where two quick ninety-degree turns put us in water that was only heaving up and down ever so gently. As Maryanne and I were pulling the Pudgy up the ramp, two young fishermen came to help. I thought they were going to grab a lifeline each and help us pull the dinghy on its wheel. Instead, they just picked the whole back end up. The sudden decrease in drag made me almost fall forward onto my face.

Fronting the harbor was a small house. We exchanged “Buenas Dias’s” and “Ia Orana’s” and they promised to look after our little yellow Pudgy for us. 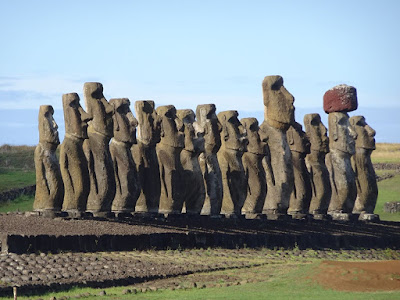 Our first stop was the big obvious thing next door: Tongariki. Tongariki was the greatest site of Easter Island’s moais, constructed during the apex of the moai period. Fifteen of them stand side by side on the largest Ahu ever constructed – 220m long and many times more mass than the statues themselves. In the early morning sun, orange light cast long shadows of their profiles on the green grass of the square. Here we were again. This was unmistakably Easter Island and nowhere else. It was amazing to think that Tongariki was to be beginning of the end of an era. Kings in a constant battle to one-up each other with ever more impressive constructions finally reached the point where there were no more trees to fell for logs to roll the statues from their quarry to their resting places, or for scaffolding to erect them. After that, Rapa Nui society declined into internecine warfare where the focus turned from boasting to violence and destruction. During that time, every moai on the island was toppled – most in a manner meant to break their necks and show disrespect to the ancestors they were supposed to represent. Most of Tongariki’s moai have been re-erected and now are able to stand proudly again as they did so long ago. It is humbling to stand in their shadows as they gaze timelessly into the distance.

From Tongariki, we walked down a dirt shortcut to the quarry at Rano Raraku, the volcano where most of the Island’s moai were carved. We got as far as the ticket booth, where the woman there told us there would be no entry unless we bought a ticket, which we could only get in Hanga Roa (We fully inteded to purchase the ticket, but when we'd tried in town previously we'd just missed the opening hours at the park office). She seemed to think we had a car and we could just pop over and get them. When Maryanne explained that we walked from our boat, just over there, she still wouldn’t budge. We had a quick lunch at the café to regroup, then came up with another plan: we would hitchhike to town.

We started by walking to the road via a path that followed one of the Moai delivery tracks toward the western side of the island. It would have been a lovely nature walk anywhere as it meandered through farms and pasture land, but here, we would occasionally come across a prone moai, stopped in its tracks hundreds of years ago on its way to becoming something awesome and regal. Instead, it has spent all of that time with its nose in the dirt.

When we got to the road, we stuck out our thumbs and got a ride from the first vehicle that approached. Our driver was Benny, a fisherman who just finished for the day. He saw our dinghy at the little harbor and figured it must be ours seeing as how we were the only people on this half of the island who got there with no wheels. He drove us the whole way to Hanga Roa while we alternated between attempting to converse in Spanish and just hanging our heads out of the window to smell the fragrant grass of the rolling hills like we were puppies on our first car ride.

He dropped us off near the airport and we meandered our way into Hanga Roa along the main road. What a nice little settlement Hanga Roa is. For what we had expected would be one of the world’s most remote outposts, is had a surprisingly energetic bustle. There were lots of the expected t-shirt and souvenir shops, but there were also more really nice looking pubs and restaurants than we would ever have time or money to patronize as well as more than a few cafes that looked like the perfect place to watch the world go by. There were also grocery stores, mini-marts and hardware stores. Most of the people milling about did not seem to be tourists, but residents running errands.

We paid for our park tickets and made a point of going through a feria (craft market) along one section of sidewalk. There was a lot of stuff there that would have been cool had we owned a house. Even so, it was hard to pass by so many mementos of our time here and settle for the photos.

At one stall, one of the women there asked where we were from. I guess we don’t pass for Rapa Nui people. Maryanne answered that she was English and I was American. At this point, she narrowed her eyes on Maryanne and said, “You have one of our statues! We want it back.”

In 1869, the HMS Topaze removed/stole a moai called Hoa Hakanani’a and took it to England, where it now resides in the British Museum. Maryanne tried to lightly explain that it wasn’t actually her that took the statue and acknowledged that Britain has had some less than proud moments in the past. The woman then broke into a superficial smile and said, “I know. I’m on your side.” , but she said it the same style as the big scary guy in all prison movies who introduces himself to the new guy by threatening to rip his limbs off and feed them to him, before smiling and saying, “Aw, I’m just messin’ with you, Man.” Spoiler Alert; He was NOT.

Maryanne said she hoped the statue would be returned soon, to which the woman snapped, while still beaming a saccharin smile, “WE can’t take it back! We have nowhere to put it. YOU have it in a nice climate controlled environment.” It was clear she thought Maryanne should have known that.

The conversation went on like that for several minutes with the woman using verbal ninja moves to turn everything Maryanne said right back on her, even after Maryanne agreed whole heartedly with her last point. I think the only thing that would have appeased her was to say we had it on the boat, but just couldn’t figure out how to balance it on the dinghy. It will be here tomorrow. When we were finally able to pull ourselves away, she wished us a good trip. Her mouth smiled, but her eyes said, “I’ll be watching you!”

We picked up a few things at the store, simultaneously giving our backpack enough heft to make it feel like bringing it was justified and making sure every step felt like three.

As we passed the airport, we began sticking out our thumbs with quite the opposite effect of the morning. Loads of cars went zinging past. We would just be thinking, “What the hell”, when they would turn off onto the next driveway. Okay, fair enough.

It then started to rain. At first, it wasn’t so bad, but then it started to rain onto the first rain and we were soon splashing up rivers of red mud that ran along the edge of the pavement.

A truck slowed down, buoying our hopes, but then the woman in the passenger seat rolled down her window to say she was so sorry, but they were full. They really were full. Our only chance would have been to ride on the hood, action movie-style. At least they apologized. That was nice.

It wasn’t until several miles later, when we reached the junction where the road splits for Tongariki that we were finally picked up by a mother and daughter who let us ride in the bed of their truck. They took us as far as the Aka Hanga archeological site – maybe half way. We thanked them and had barely made it past the parking lot when we were picked up by a woman leaving in a van. She turned out to be the ‘bus’ for the youths working at the various sites. She dropped them in the morning and picked them up when their shift was done. During the day, she delivered water and lunches. We had a slow drive as the road was clogged with wild horses. She explained that every time it rains, the horses come to the road to drink from the puddles that collect on the paved road. Most of the island’s volcanic soil is so porous that standing water is rare in the fields where they graze.

She dropped us off where the road splits to go to Rano Raraku and we walked along the coast back to the harbor at Hotuiti. As we arrived, we stopped at the house to say hi and were invited to coffee with Anna, the matriarch.

She talked and talked and seemed not to care if we could understand her. I was getting the gist, but Maryanne seemed to be doing much better. She later told me she wasn’t. She was just smiling when Anna smiled and looking upset when Anna looked upset. The one thing we both picked up on was that she didn’t like Chileans being on her island. We understand that nobody is likely to appreciate their occupiers, but we’ve hardly met any Chileans we didn’t like, so it made for a squirmy hour or so before we were able to use the setting sun as our excuse to get home. Before we left, she gifted us a giant piece of fish caught by her husband that day. It looks like fish curry for dinner.