[Kyle]From Haapiti, we exited the pass, unfurled the jib and had a nice, slow sail up Moorea’s west coast. Once we rounded the northwest corner, the wind that had split in two directions as it encountered the southeast corner met each other again and we were given a thirty second lull before being hit with twenty knot headwinds and a one and a half knot current setting us backwards. Our options were to tack back and forth against it, which would require a lot of miles, maybe sailing four to five times the distance, and subjecting Begonia to a real beating, or we could motor directly into it, burning a lot of fuel and subjecting Begonia to a real beating. We chose the latter because it seemed like it would take less time and would therefore be a slightly shorter beating.

Once we had an engine going and were pounding into it, we weren’t so sure. It was three hours before dark and we gradually slowed to where we looked like we weren’t going to make it the four miles to the pass by then. At least going slow meant the waves were not hitting us that hard. With no choice left other than wait out the night at sea, I started the other engine to boost our speed. Our speed over the bottom shot (shot?) from 1.5 to 3.0, or even 3.5 knots. Now we would definitely get there by dark, but the waves were hitting us with four times the force. I don’t care for that.

We entered the pass at Opunohu Bay, the seas calmed and we sped up. Then we made a right turn downwind and we were zipping along at six and a half knots as we threaded our way through a marked channel to the ‘tiki’ anchorage off the village of Papetoa. A lot of people we have spoken with love this anchorage. We had tried coming the year before with our friends Geoff and Sarah, but it was packed, so we abandoned the idea and went somewhere else. This time, we found a space on the edge of the sand shelf and dropped anchor. 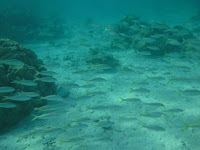 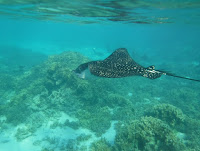 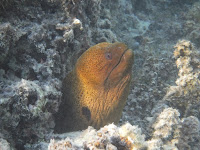 The anchorage here is really just a wide spot on the route, marked with stakes, between the Intercontinental hotel and the rest of the northern part of Moorea. It will fit about five boats if they’re spaced just right. Beyond it the channel is too shallow for anything except dinghies, shallow draft tour boats and jet skis. This provides ample opportunity for all three to display lots of impolite, self-absorbed behavior as they go zipping through the tight anchorage at full speed, passing only a meter or two from the anchored boats.

The dinghies should know better, although the modern contingent of cruisers seems to have an increasingly larger proportion of people who are unconcerned about anything beyond their own decks. The tour boats seem to think all of the water around here is really theirs and we’re just a nuisance and an obstruction (fair point). Some even seem to be speeding up as they go through to make some kind of point. Then there’s the jet skis. I just made up a statistic that 90% of all people on jet skis are riding one for the very first time ever. If it’s not true, I bet I’m not too far off. The other 10% are the guides, who clearly gave instructions to the others to follow his line as closely as possible. That would be somewhat reassuring if he wasn’t spending most of his time trying to impress the girl clinging for dear life to her ne’er do well boyfriend three jet skis back, whose daddy paid for the trip. It can only be a matter of time before one hits a wake, loses control and flies head first into someone’s bowsprit.

At nightfall, the jet skis stop, but a handful of tour boats still come plowing through at speed using a spotlight. We were glad we were not one of the boats on the centerline AND that we have so much SOLAS tape that Begonia lights up like a Christmas tree under spotlight.

In the morning, we were just about to head off for a snorkel when another boat came in. They found no space, and then pulled up close enough to us to be two slips over in a marina, maybe ten meters away. They then dropped their anchor until it touched bottom, plus another meter for good measure. Then they launched their dinghy, loaded it up and sped off. I was pretty outraged, but I forced myself to give them the benefit of the doubt and wait for a bit before letting them have it. Perhaps they were just having a brief stop and not staying the night. If it got to where it was looking like they were, I’d tell ‘em to move it.

We noticed a little while later that they had left someone aboard, which we presumed was to keep an eye on their boat while it sat on its lunch hook. That made us feel a little better as it was apparently his job to react if they started dragging or swinging the wrong way. He would occasionally pop out on deck and look at us. Ordinarily, I would say hi, but I was worried it would come out, “Hey Dickhead, what the f…”, so I didn’t. I did what he did. He gave a blank stare, I gave a blank stare back. He didn’t smile, I didn’t smile. I was fully prepared to, but it never came up. If he was a reasonable person, I’m sure he felt a little embarrassed about crowding us like that and may not have wanted to provoke me by doing anything either too friendly or too aggressive. I got that, so I decided to pretend to be nonchalant about it until three o’clock. That would give them time to make it to another anchorage by dark. In the mean time, Maryanne and I were going snorkeling.

Snorkeling was a stressful affair. We had to dart from boat to boat for cover until we were in water too shallow for even jet skis. A couple of times, we didn’t make it and Maryanne had to wave her bright orange safety float over her head to get them to make a last-second swerve around us. 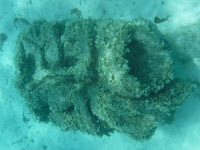 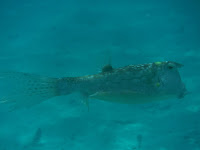 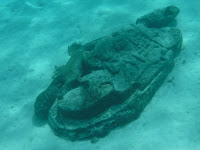 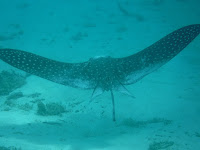 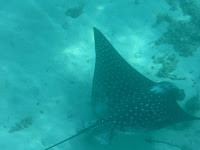 At the other corner of the anchorage, after a bit of aimless searching, we reached our goal: a handful of bommies that weren’t bommies, they were Tikis (we think modern style) - Hence the unofficial name of the anchorage. None of the research we did was able to provide a reason or a source for the tikis. They seem to be there as an unexpected surprise for those who know about them. Some of them were quite overgrown and hard to distinguish, but most were in reasonable condition – better than one would expect if they were from Polynesian prehistory. There was one statue in the iconic style. The rest were more abstract designs harder to interpret. My guess is that they were either rejects – crumpled pieces of paper in the waste bin – or that some local artist/entrepreneur snuck them in – probably some of each. The one in the best condition looked like it has only been underwater for a month.

After swimming the same gauntlet back to Begonia, we arrived just after our neighbor’s dinghy. One of the other boats had left and they hurriedly repositioned to their old space. No need for a conflict. After they left, forty jet skis and twenty tour boats came blasting through. We decided we weren’t spending another night there and headed around the corner to the head of Opunohu Bay, where the cul-de-sac and the larger space kept most of the jet skis and all of the tour boats at a safe distance. Plus, we had one of the most beautiful views in all of Polynesia. 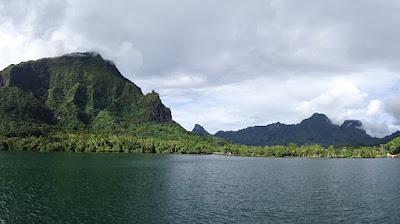 We were planning on hiking up to the Belvedere viewpoint the next day as Maryanne had skipped it the year before. When the day dawned, though, it was pouring rain with no sign of letting up soon. We waited and waited for it to clear, but eventually, it became clear that if we were to do the hike, it would be a miserable ordeal in which the main memory would not be the amazing views at the top, but instead miles of mud slipped on, squished through and carried home, mostly on the basketball sized blobs at the end of our legs. No thanks. Belvedere will have to wait for another time.

The forecast was for at least three more days of the same conditions, so we again decided to depart early. We left that afternoon for the overnight sail to our next stop, the island of Huahine.