[Kyle]After Oruruhoe Bay, we went all of two miles all of the way to the corresponding spot on the other side of the Cape Brett Peninsula. To get there, though, we had to sail all of the way around the thing. We did the same as before, just unrolling enough jib to keep us moving, but not enough to block our views. We sailed close under the cliffs, alternately thinking it looked like we were in Northern Ireland or Scotland or Maine or Northern California. In truth, I guess it looks like New Zealand. Either way, we couldn’t help marveling at it. 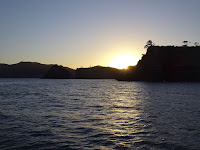 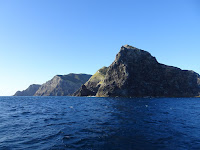 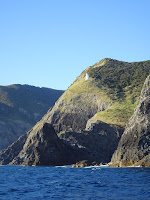 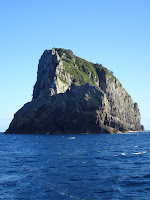 As we passed the lighthouse and the keeper’s cottage at Cape Brett, we got the answer to one of the questions that had been bugging us: How did they build a road there?

They didn’t. There are a few long hiking trails to get there, but the light itself is serviced by helicopter. Since there’s no flat spot to land, the helipad sits out on an enormous platform that probably took more stone to build than the lighthouse and the cottage combined. A bridge then connects the platform to the 60 degree cliff alongside. The cottage is built into a flat spot that has been blasted out of the hillside and a long path zigzags to the lighthouse itself high above.

In spite all of this obvious effort, Cape Brett lighthouse still has a less than perfect view of the sea below. Several sectors are obscured, including a very large one in the direction of vessels approaching perpendicular to the island from offshore. That sector is blocked by a very large rock pierced by a very large archway known colloquially as “The Hole in the Rock”. If you visit the Bay of Islands, you can choose from lots of tours that include being sped through on a boat, snorkeling, diving or even landing on top in a helicopter. We were trying to beat the rain, so our early morning departure got us there before the crowds arrived.

Whangamumu appeared as a small indentation in the coastline. After s-turning our way in, we anchored in the middle of a completely calm bay with only a sliver of open ocean visible through the gap. A New York realtor would bill it as a complete view of the WHOLE Ocean.

The bowl of the bay was lined with a layer of mature deciduous forest separated by meadows of grass and ferns. We were keen to climb all over the place.

Blue skies (for a short while!)

The very moment we got the dinghy into the water, the skies opened up and it started pouring. We cancelled our hiking plan and hoisted it back into its nook in the transom. I changed out of my wet clothes and the moment I put on my last dry item, the sun came out and shone brilliantly. Of course… We put the dinghy back in the water again.

We rowed over to the remains of the old whaling station and poked around the ruins for a bit before reboarding the dinghy and heading to the beach at the head of the bay. We found the trail leading up to the ridgeline and started climbing through tall grass with the goal of seeing over to the Bay of Islands on the other side. 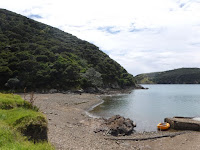 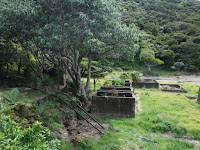 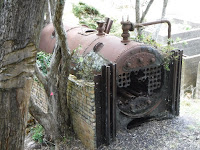 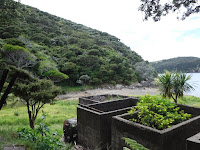 No sooner had we entered the forest at the top of the clearing than it started raining again. This rain was not Tropical, meteorologically speaking, but Temperate. Tropical rain forms when water droplets at altitude bump into each other and coalesce until they are too heavy to remain suspended. It is wet. Temperate rain forms when frost forms on other frost until it becomes too heavy to remain suspended. It melts on the way down, but just. It is wet AND cold. We decided that was enough of an outing for the day and headed back home.

Kyle could not resist the view from atop a hill before the next wave of rain!

We had just finished changing out of our second set of wet clothes when the rain hitting the cabin top started to get louder and louder. The rain changed to gravel-sized hail. Hail! – little frozen pea-size ball-bearings of water! I knew that rain was cold.