[Kyle]We had an easy sail from Erromango to Efate. Light tailwinds let us fly the spinnaker until we got close to Port Vila. Then I switched to jib and then to bare poles to slow down for a daylight arrival. 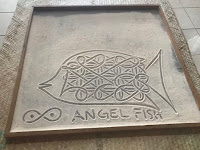 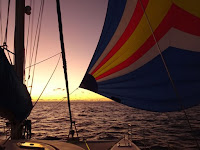 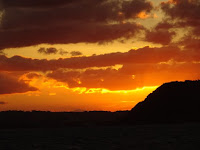 An overnight sail between islands

We had been hoping to pick up a mooring ball, but had been beaten there by all of the rally boats, so they were all occupied. Vila Harbor is really deep, with mostly 30-meter depths over a bottom that is littered with anchor-eating wrecks, storm debris and coral bommies. Our only option that wasn’t way out of town was to anchor along a very narrow strip of sand at the entrance. All of the other mooring ball orphans had the same idea and we all ended up packed way too close together in the available space. We spent all of the rest of the day keeping a wary eye in all of the boats right next to us. 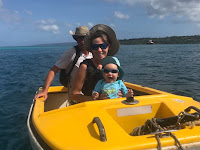 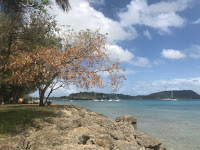 {Maryanne: Port Vila is the national capital with a population of around 45,000. It is home to Parliament and generally more western conveniences, but also the national museum and plenty of local craft markets. While we were there we also needed to submit a sealed envelope to customs and collect a new one - we assume this is our cruising permit but were never quite clear.}

By morning, we decided we probably wouldn’t hit anyone and went ashore for a day of errands. We landed near one of the city’s big markets. They are helpfully named Namba Wan, Nambatu and Namba Tree in the Bislama language (Number 1, 2 and 3).

We found a table in the kitchen area of Namba Wan, where different vendors cook for a table or two of customers each. We squeezed in at a picnic table with a few businessmen eating their lunch and ordered one for ourselves. The prices are fixed for a standard meal with a choice of meat. Everybody else at the table had fish, but we opted for chicken. When the guy learned we were off a boat, he smiled and said he figured we were probably sick of fish by now. Something like that.

Our meal was basic; meat, salad and lots of rice, but it came on magic plates. Every time we looked like we were running low, the cook gave us more. Eventually, out of guilt about his spindly little chickens, he added in big chunks of beautifully marinated beef. We should have known. Vanuatu is famous for its free-range beef. It was marvelous and just melted in our mouths.

We introduced ourselves to the other guys at the table. The one we were sitting next to turned out to be the Minister of the Department of Tourism. Ha! He also helpfully pointed out which of the multicolored condiments was the REALLY hot sauce. When the cook saw me go for that, he produced a big jar of pickled hot peppers for me to spoon on top of my meal. I was a happy man! 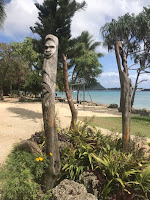 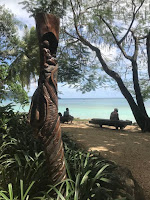 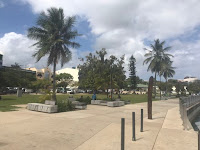 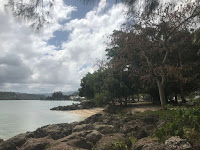 We wandered the waterfront for a bit. Port Vila has some beautiful parks and lots of great public art. Everyone we met was nice, although not quite as gregarious as remote villagers. You can’t say “hi” to everybody in a city. 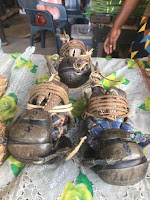 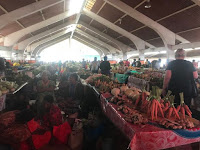 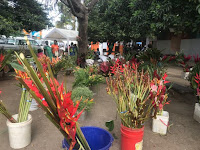 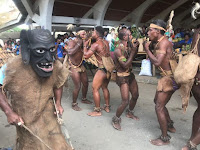 At the Market, there was also an unexpected performance by a group from the Solomon Islands

From what I had read, I had expected Port Vila to be upscale and even a little snooty. Instead, it was friendly and laid back. It’s not super scenic, but it’s got everything close to hand and it’s filled with smiling Ni-Vanuatu, who are rapidly becoming my favorite people.

We had a tip about some great views from the resorts on the far side of the ridge from the harbor. They all sit on the shores of a fresh water lake bounding the other side of Vila. The views were okay. I think the harbor side is prettier. It was really apples vs. oranges. 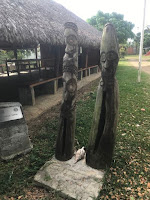 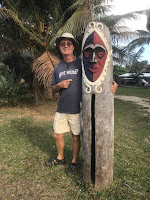 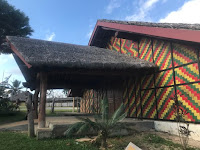 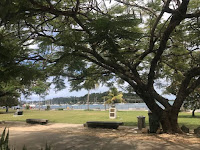 Along the way, we stumbled on our first nakamal. Nakamals are technically meeting houses for the chiefly clans, where kava is ritually consumed. In Vanuatu, the name has now migrated to also mean any kava bar. 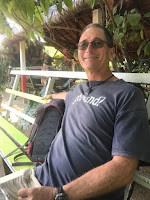 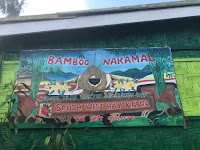 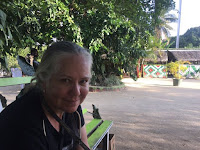 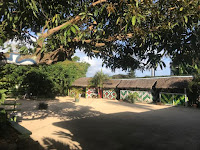 Kyle was keen to sample the kava at the Nakamals

Kava is different in Vanuatu than in Fiji. Firstly, it’s a LOT stronger. Mostly, that’s because they use as little water as possible in the preparation. The rest is probably because the strain of plant is more potent. Because the stuff is not watered down, it is also commensurately less palatable. Think espresso vs. weak coffee.

Thus, the process for consuming kava is different in Vanuatu. Although it is consumed ritually in groups on occasion, most kava is taken individually here. Since even locals gack at the taste, the procedure is to buy it by the shell, then drink it immediately by a tap, where the extra water can be used to swish out the flavor (and rinse the shell). Because kava is expensive and valuable, it is dispensed from locked cages. This makes the business end of a kava bar look like an off-track betting office is sharing the premises with a dental practice. Once all of the spitting and “get this off of my tongue!” faces are over, it comes time to go to the biggest part of the nakamal, quiet seating areas in the shade, where one can just chill while the effect kicks in. Then kava becomes communal again as people just hang out and talk under trees or at tables.

Vanuatu kava is definitely more revolting than Fiji kava. It is also definitely stronger. After only one shell, plus the part of Maryanne’s that she couldn’t finish (i.e. 1.95 shells), I was feeling relaxed and thinking warm thoughts about my beautiful travel companion. Despite the taste, I like kava. It fills me with a brotherly affection (she is my brother…), doesn’t make me woozy once it’s down, doesn’t give me heartburn and doesn’t give me a hangover. That said, kava is not a sipping beverage. Nobody is EVER going to have a nice glass of kava with a meal.

The next day, we met up with Rick and Amanda from Duplicat and took a walk to the National Museum before heading to a local microbrewery for a tasty lunch. 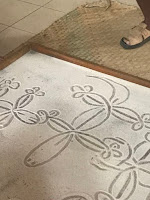 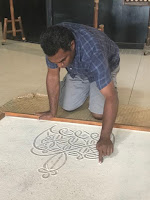 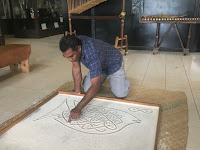 We then boarded Muse for an overnight trip to Mele Beach for a fire dancing show. We have seen a bit of fire dancing now and we like it. Mostly we were there to spend time with the Muse family. We would likely be parting ways for at least a few weeks and didn’t want to pass up any time with them.

The show was A-MAZ-ING! Most fire dancing is basically just baton twirling with flaming batons. That’s cool, but these guys took it to a whole new level. It was like Cirque de Soleil with fire. There was the usual twirling, plus lots of acrobatics as well. They did one slow dance where they waved torches as long as palm trees overhead and then swooped them down low over the audience, bathing us all in orange light. It brought tears to my eyes (It was the smoke!). They also had this amazing trick where they would spin a flaming mace so fast that it would send a solid wheel of sparks into the whole sky behind the stage. We equivocated when Phil first offered to bring us along, but we are SO glad we decided to shuffle things around so we could go. We all had a great time. 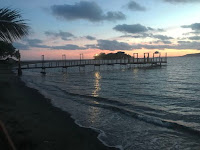 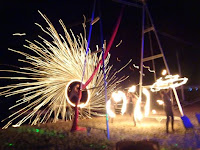 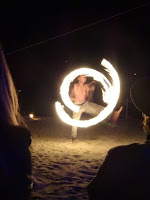 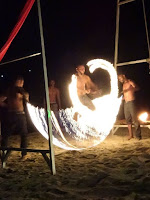 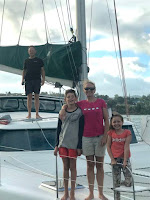 In the morning, Muse brought us back home. They had a few last-minute errands and then they were heading to New Caledonia in the morning. They spent the night tied up to the fuel dock at Yachting World. We ran a couple of errands, but mostly stayed aboard. Our little patch was even more crowded and we wanted to be around in case someone came too close. We hadn’t slept well in the unfamiliar bed on Muse, so we went to bed earlier than normal.

As I was falling asleep, I could hear the music from the fire show going over and over in my head. What a nice memory. Then I realized I was hearing music with a similar tempo coming from outside. I popped out into the cockpit to look for the source and saw THE SAME fire dancing troupe doing the slightly abridged show at the resort across from the city. It was too far away and at a bad angle to see from where we were, but the beach they were using as a stage was right next to where Muse had been at their mooring before leaving for Mele. Oh, If only we had all known we'd have taken our dinghy over and enjoyed it all over again! Phil said he saw it too and had the same thought.