[Maryanne]Back at the boat for the weekend, we decided to sail Footprint into Boston Harbor, and then out back into the Islands to tour.

The wind was great, and the Harbor was busy with sailors and power boaters with boats of all sizes - and of course the many ferries running back and forth. The ferries are amazingly maneuverable and they alter course before you even worry if there is any risk of collision - we watched them zig zag through crowds of boasters without issue and were very impressed. Unfortunately most pleasure boaters are as good at boating as Bostonians are at driving (i.e. INfamously BAD). Even sail boaters would not give way as the rules obliged, power boaters would not divert to pass behind us, and we often had to stop in the water under sail to avoid hitting them as they passed just feet in front of our bow. Quite a journey. Oh and they don't wave much either.

Getting up close and personal with the Boston skyline WAS fun - and we poked our way up and down all the inlets until they ended or we were blocked by low bridges. Chelsea area is industrial and run down, in fact there are signs of heavy industry EVERYWHERE in the harbor and bay, but still plenty of cool stuff to look at too.

Once we had fully explored the City area of the Harbor, we left to wander the islands just outside. The islands are all (now) national park areas and open to the public (with the exception of Thompson Island, used as an Outward Bound Center), but in the past they have been the home of: Insane Asylums; Military defenses; children's hospitals; gambling and prostitution centers; small pox quarantine centers; etc. Some are even supposed to have sunken/buried treasure. Some of the islands have cafes and crowds, some are wild and rugged with rare visitors.

You don't need your own boat to visit as there is an active ferry schedule to the many of the islands.

Dominating the view is Deer Island with its towering "eggs" - a central feature to the city water treatment plant and credited with cleaning up the harbor. 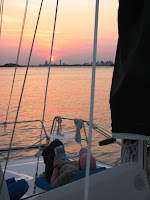 We chose Peddocks Island to anchor for the weekend and ended the day with dinner to another sunset. Next morning (actually it was afternoon before we surfaced) we rowed ashore to Peddocks Island to explore. We landed on the South-Western Tip, and circumnavigated by foot. Walking was hard going - either on cobble beaches, or inland through mosquito infested trails. From the Center to the NE end, paved paths appear, and we passed a few holiday/summer cottages (mostly collapsing, and some long abandoned; as owners die, the property is turned over to the National park services.. and so far they are doing nothing with them). At the far NE end is a complete (disused) Military base (Fort Andrews) with plenty of large brick buildings (used both as a defense base and to house Italian Prisoners of War). Again the buildings are clearly falling into disrepair - roofs collapsing, windows boarded, doors locked. We came across the two "live in" park rangers but they didn't add much to our tour. 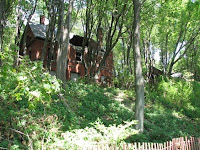 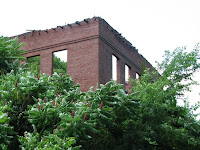 We took a lazy day the following day, returning to our mooring, and preparing for the week ahead. The weather has been great, and we ended the day again on deck watching the sun set (unfortunately the bugs joined us again, luckily for me, they prefer Kyle) 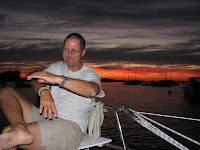 I know you will spend lots of time in Boston proper and you will enjoy the historical sights. I loved all the old graveyards and churches there--oh, and of course the Irish pubs. Make sure you spend plenty of time tipping a few with the Irishmen. As for driving in Boston, my scariest cab ride occurred there, when the driver left the street altogether and wove himself through parking meters (all expired) onto the sidewalk, dodging pedestrians and hot dog carts to get around a traffic jam ahead. This, he did with a perfectly placid look on his face. It was clear to me this was normal behavior and soon enough, he was back on the street, ahead of all the double-parked delivery vans that clogged ALL lanes of traffic for a full city block. This, too, was apparently normal. Maybe you'll get up to Plymouth to the living museum settlement up there. That's a fun day too. Have a wonderful time.

Umm..lived in Boston all my life and never saw a cabbie do that. Future 105mc owner here and really enjoying your blog.

Just a note Deer Island treats sewage, not water. Those eggs are filled with all the @#$% and %^&$ from 43 communities in the greater Boston Area