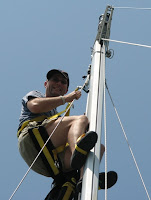 [Kyle] Okay, so here's the way marinas are. They need your business to stay in business but they almost universally hate having real boaters around because we always need something and actually require services in return for our mooring buck. This is as opposed to the vast majority, who leave their boats completely unattended and whose presence is only known because of automatic payments for the boat they forgot about that is mouldering away at the slip. At Ocean Marine in Portsmouth, the dock master was openly hostile to anyone who required him to do anything. This included having to get up in the morning for work. As appalling as this sounds, this is typical dock master behavior. The best you can generally hope for is complete indifference

So...It was with this in mind that we showed up at Hewitt's Cove Marina in Hingham, Massachusetts. The place is huge so we expected the staff to be proportionately annoyed at pretty much everything. Not so. Instead, everybody was creepily friendly. They actually seemed glad to see us! The woman in the office offered to chase up public transportation schedules (which she did) for us then, get this, she actually told us where she lived, just in case we thought of anything we needed after hours. Incredible! There's a grocery store right across the street, propane a little further and pretty much anything else you could want between the two. The facilities are nice and new and clean, they'll run us as many times as we want back and forth to the boat in the launch - cheerfully and, AND it's cheap! I like cheap.

One of my first orders of business here was to go up the mast in the bosun's chair and figure out what happened to our hailer horn. After an hour and a half in the blazing sun taking apart the whole hailer/radar setup I was able to determine that the hailer horn didn't work. We need another one. When Peter Kennedy installed this one, he mentioned that all horns were notoriously unreliable and that we may only get a couple of years at best out of it. I guess he was right but what a drag going up there to replace it is going to be. There's no way to do it without taking apart everything up there and putting it back together again, particularly since it's actually summer here and it's hot, man!

[Maryanne]Our previous marinas really have not been as bad as Kyle portrays - although he definitely has the right flavor; he is a little too harsh! I have found all the Marinas we have stayed at have at least one person who does more than he need... However so far, Hewittit's Cove Marina has been especially helpful.
Posted by SV-Footprint at 6:26:00 PM

Kyle, care for a little cheese with that wine? Ha! No, installing a new hailer horn does sound like a pain, but also a necessity. Maryanne, you are such a balloon popper! If Kyle wants to paint those dock masters as colorful old curmudgeons, let 'im. It's more interesting that way! If I wrote about my family, as crazy as they already are, they'd come off as carinval freaks because... it's just more entertaining (and possibly more publishable).