Hanging out in Cap d'Agde 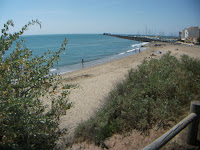 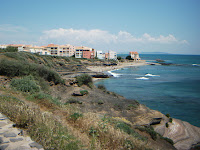 Coast around Cap d'Agde
[Maryanne]Poor Kyle hardly had time to enjoy his surroundings and an ice cream before he trudged off in the early hours towards Agde train station and on to Paris for a flight to work; I think I arose about the time he'd have been halfway to Paris.

I had a number of chores, but found plenty of time to explore (much of which was spent looking for Internet).

I needed to top up the boat's water tanks; I have a 30m water hose and a host of different connections to fit to various threaded taps and the 'quick-connect' type systems - what could stop me? First problem was I could not find water at our docks which seemed as though they were a newer extension. My water hose was not long enough to reach the original docks with their plentiful taps! Just at the point I was working out I'd have to jug the water from the taps to the boat (what exercise!) a fellow British boater (Chris on Amy) saw me pondering and offered me the use of her hoses, before you know it I had a hodgepodge 70m (230') of connected hoses and was topping up my tanks.

At this point a French boater pointed out the 'modern' water connectors that were just a few meters from my boat (at the back of the power pedestals). After filling the tanks I decided to return all the borrowed hoses and try out the new connectors but I still couldn't work out how to use them even with Chris's help - perhaps we needed a special connector and I added a note to myself to ask at the Capitanerie. Some time later I met the same French boater at the dock and asked her to confirm how to connect to the modern/different water fittings... "Oh but you had the right connector" she said, "right in your hand". I tried again and couldn't connect, perhaps mine was slightly a different diameter? Some French/English difference? She compared my connector to her connector - identical - and with her confidence and a LOT of elbow grease we shoved the connector in place needing a force way beyond where I had given up and Voila! Water. 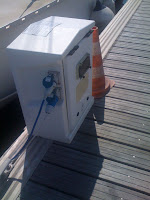 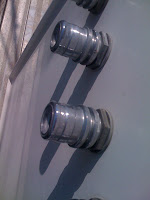 These metal tubes at the BACK of the power pedestal connect to the water supply! So much still to learn, you pull back an outer sleeve and push your 'quick-connect' hose fitting in with all your might
I met up with Chris and her husband Phillip a number of times during our stay, they were warmly welcoming and very kind, and Chris took a particular liking to jelly beans which I'll have to remember if we cross paths again.

Along with my household and boat maintenance chores (I have to say that since Kyle will be reading this), I managed a day on my bicycle exploring the surrounding beaches and scenery, and another day in Agde to sightsee at a more relaxed pace. Our Camera has been seriously misbehaving recently. It keeps shooting in the wrong mode (e.g. using Macro for a scenery shot), meaning we end up deleting 80% of the pictures we take. It also seems to shoot everything at least a little out of focus and very gloomily and cuts off two of the corners on most shots; it's been really frustrating. At some point it seemed to have lost a couple of days of pictures entirely and this was the main reason for my returning to Agde (Luckily they were recovered some time later when we realized the memory card had become unseated).

Cap d'Agde is (in)famous for its nudist colony (they even have a naturist Marina). It seems this and most of the water parks etc. are seasonal and all seemed closed right now, so I never found myself in trouble, nor enjoying (or not) the special views of the area.

The stress of chores and cameras was forgotten though as the South of France Wine tasting weekend arrived (Vino Cap), and right on my doorstep (well, almost). €5 was exchanged for an event wine glass and all the wines I could sample for the weekend, some stalls shared fancy nibbles too. With over 80 different stalls, each offering between 3 and 8 different wines, there was no way I'd taste them all. I spent one day sampling a few white wines, skipped the rose completely, and another day sampling reds. I can't remember which ones I liked or didn't like, but It was great fun; such a shame Kyle wasn't able to share it with me.
Posted by SV-Footprint at 12:22:00 AM

that's so nice that several people helped you with getting your water tanks topped off! i really do believe that boaters consider other boaters family; you're in it together, really. i'm jealous of the wine festival. it sounds as if it was rather a good deal? i have to say that i have lately enjoyed rose wine. apparently they are making a comeback & are being taken more seriously. then again, i'm the person who went thru the german dessert wine line 4 times at a festival once.