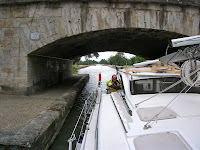 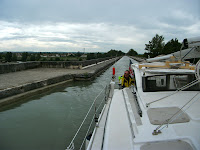 Canal de Garonne - bridges to go under and aqueducts to go over
[Kyle]At precisely 9am the power was restored to the locks, and the traffic lights lit. We turned our start rod and so began day 2 in the canal.

The weather had turned grey and windy and it even had the audacity to rain intermittently. The canal also had a change of character as we passed into a different ‘department’. Previously the canal had been lined on either side by evenly spaced plane trees along well manicured verges and footpaths, now we start to see busy overgrowth, a much wilder canal, often encroaching some way into the canal itself. The water was a carpet of leaves, twigs and debris and there were several sections where we saw nobody for hours. Every now and then hidden among the shrubs we’d find an abandoned and derelict boat of varying types (from commercial barges to small sailing boats). If it hadn’t been France I would not have been surprised to have heard banjo music.

At one point on a particularly remote part of the canal we spotted the tips of fishing rods sticking out of the brush and managed to just slow Footprint down and plunge her into the trees on the other side as some very surprised looking fisher folk popped up their heads and gratefully and apologetically thanked us for not wiping out their gear.

The wind caused us all sorts of new problems. It was very gusty and seemed to be especially exposed at the entrance or exit from a lock – just when you need to be most careful at avoiding hitting hard things in a narrow space. The conditions required Maryanne to do a lot of running back and forth to fend one side or the other as we entered the locks (where we have 3’ to spare on each side of the boat).

At one lock we were surprised to find a real-life canal (VNF) employee; a teenager who seemed mostly disinterested in our presence leaning against the railing of the control house, so after locking up uneventfully we just got on with managing the process ourselves. He did manage a half-hearted wave back at us and pushed the start button once I was already most of the way there, he didn’t even have to take a step to do so, but clearly didn’t want me to encroach in his zone, teenagers are hilarious!

Naturally though, when you have an audience, things can go spectacularly wrong, just as we exited the lock we were caught not only by the expected pull of the weir, but also a strong gust caught us and blew us into the wall as we were half way out. This caused the boat to pivot on the side and push the bow well off towards the weeds as we were blown out and sideways of the lock. I tried reversing away from the bank but that just brought the stern closer to the lock gates and walls, and gave the wind a chance to blow us more sideways into the concrete. I could turn the boat away from the lock only by nudging the bows into the bank and pivoting on them – but there were rocks in the shallows of the shore so Maryanne was desperately plunging the boat-hook into the soft bank trying to keep her off, fighting the engine. We did this for ten desperate minutes to no avail. Every time I got the stern a little further from the lock, Maryanne would plead with me to go easy on the bows. I would back off only to be blown back toward the lock again.

The whole time, our teenager stood leaning on the control house railing, watching with no expression whatsoever, as if he were staring at an empty road waiting for a bus that wasn’t expected for another hour. I would have expected concern or amusement, but there was nothing. I was finally able to pivot the stern around, away from the lock. By the time we were clearly back in control, our VNF helper sauntered over, still expressionless, and half-heartedly went to push one bow back into the canal, but it was already on its way and out of his reach. We then made an ignominious departure backwards down the canal for ¼ mile or so until we could find a safe spot to tie up and check for damage. Poor Footprint seemed to take it better than our pride and came out relatively unscathed. I just wanted to turn around and go forward around the next bend where he couldn’t see us any more.

From day one in the canal the water was littered with tree debris, and Maryanne had prudently suggested we should check the raw water strainer each night; something we normally only bother with as a monthly ‘just in case’ check. Each night the strainer has been full of debris, and each night is a lottery of what it might contain. The first was compacted flower petals, the second a mini-forest (including branches with the leaves still attached), and the third was mostly seeds and dead leaves. It was always different, but always full, and now has become a necessary part of our daily routine.

Towards the end of the day the canal seemed to tidy up a bit and we approached the town of Agen (famous for its plums!) Agen has a dramatic entry over a long viaduct crossing the Garonne River, but the entrance to the town itself was very industrial, ugly in fact. We’d planned to stay but just couldn’t face it so we ended up just filling up the fuel tanks and moving. Eventually the locks were turned off and we found ourselves spending the night at the waiting dock at Lamagistére, another remote French hamlet. It was a very peaceful spot dominated by bird song. Later in the night, the sky cleared to display a beautiful blanket of stars. 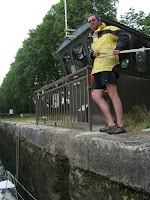 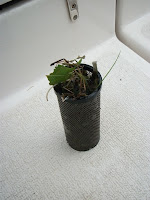