[Kyle]Before the boatyard opened, we left the crane dock and motored our now sailboat the meagre four miles from the yard at Grau d’Agde to the marina at Cap d’Agde. We both really wanted to shake the sails out and sail around for a bit, but we still had too much to do and the trip wasn’t long enough to justify it. 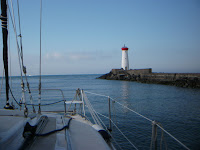 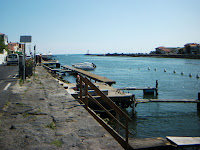 The marina complex in Cap D’Agde is gigantic, with just under 2,500 berths. After we got our slip assignment from the Captainerie at the welcome dock, it took us another fifteen minutes to motor the distance to it. We had a bunch of errands we still had to get done in Agde proper during business hours – about a one hour and forty-five minute walk – so we secured everything and hastily departed. 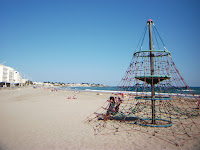 The Beaches of Grau d'Agde on the Mediterranean
We spent the whole day in Agde alternately waiting around and running on wild goose chases in the midday heat, all to no avail. By the time we trudged back home, we were defeated, both physically and emotionally. We both wanted nothing more than a few hot showers each, a hasty meal and then to flop into to bed.

We went in search of the shower block and in the process noticed something strange about Cap d’Agde. Even though it is probably the biggest marina we have ever used, it has almost no facilities for boaters. There was no laundry room, no store and no dock carts. When we did finally locate the poorly marked shower and toilet block, we found it to be grudging, as if there were some law that said they had to put in one toilet bowl for every 100 berths and one shower stall for every 300.

The town was clearly set up for the throngs of tourists that flock to the waterfront by car. The whole harbor was ringed with souvenir shops, ice cream stands and beautiful open-air restaurants serving wonderful smelling food. Everything was at tourist resort prices. I suppose if you had mega-yacht money (with posh on-board facilities and a crew to do your laundry), it would be a lovely place to while away the day in the seat of a rotating selection of restaurants and cafés, watching the world go by. For us, it was a little more of a gauntlet, trying to get through the two-block zone ringing the water without ending up with something we just discovered we have to have. I wasn’t bothered about big oil paintings or marble flowerpots, but the gelato stands were a little harder. 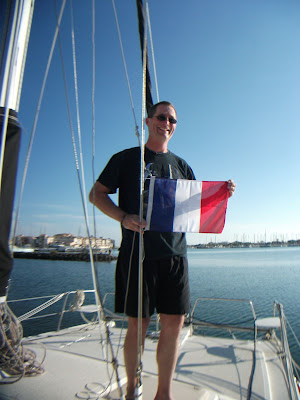 With the mast back up, we had an extra Flag raising ceremony!
Posted by SV-Footprint at 6:30:00 PM

Glad you guys are out of the canal without damage. It seamed like that was more hazardous to your boat than the Atlantic crossing.