Out of the Obstacle Course and Back to Being a Sailboat 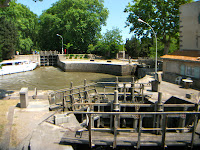 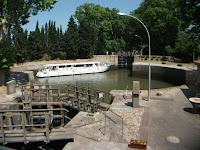 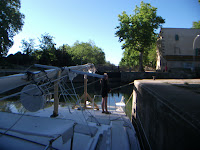 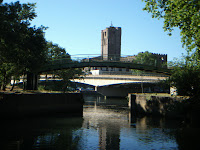 The last lock - a special one with 3 gates, and finally the canal ends and meets up with the river
[Kyle]We went out alone through the last lock, the enormous Écluse Ronde, which is probably big enough to accommodate ten boats at once, except that nobody was going our way. After a short section of canal, we joined the Hérault River and headed downstream to the place we would be stepping the mast the next day. Once we arrived at the location, we found two places in fairly close proximity to one another. The one I thought it was didn’t seem to have a crane around, but looked like they may have one out back. The other one had a nice, big crane out front looming over a nice dock that was obviously paired with it. The scale of the chart was such that the arrow with the phone number Maryanne called a couple of days before could have been either one.

We tried my place first. They had lots of machinery and yard space and could clearly handle anything, but the adjacent bank looked like a post-apocalyptic ruin. There were sharp metal and concrete piers and pieces of piers sticking out everywhere. Only about a third of them had a rotting tire or a flat fender on the offending piece as modest protection. The only semi-safe place to go seemed to be in the travel-lift slip. I landed Maryanne very carefully from a corner of the boat on a slab of crumbling concrete and she went in to figure it out. They were very evasive about whether our reservation was with them or not and became noticeably annoyed when she suggested we would go to the other place to check with them. If it wasn’t them, we’d be right back.

It was them (the other place). The guy said that even though they weren’t expecting us until the next day, they could put the mast up later that very day. 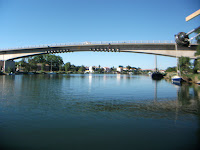 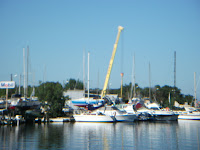 The last 'problem' bridge, and somewhere to re-step the mast
We spent the next few hours pre-doing as much as possible so the lift would be smooth. Once the time came, only about ten minutes elapsed between connecting and disconnecting the crane. The bill was only €25! Maryanne and I spent the rest of the day’s light tuning and tensioning the rig, sorting out all of our lines and putting the wind generator back up. We got the Genoa up, but ran out of light before we could get the mainsail back on. It’s more complicated with all of its associated hardware. We tackled that last job at first light the next morning. We were now a sailboat again!
Posted by SV-Footprint at 5:00:00 PM