View from Laughrigg Fell - the Lake District
[Kyle]For those of you who saw me standing on the ice and decided I was completely crazy - perhaps! But, I had a good plan for the rest of the day; it involved snuggling up on my warm and cosy boat, with boat heaters on, enjoying the occasional glass of whisky and some lovely hot potato soup. Maryanne (!!), in a demonstration of why we are actually perfect for each other, decided she wanted to spend the day hiking the hills of the lake district in sub-zero temperatures. SO, off we went in a rental car to go and spend a day familiarizing ourselves with some of the many ways to die in Britain's climate.

I want to reiterate! This was Maryanne's idea. I was for staying inside the toasty warm interior of our ice bound boat. However, in the true fashion of me, once she got me out there and pointed me in the direction of the highest hill (which by the way was shrouded in cloud) my tail started wagging and I was eager as ever to go sprinting to the top with her in tow. It was actually a beautiful, stereotypically winter, day. Fresh snow covered the fields, we saw several groups out sledding, and the low temperatures, which we were properly dressed for, kept the ground from being being boggy and muddy and horrible. Except for a few patches of thick ice, the weather made for easy going.

The views of the valleys with the hills beyond and the lakes below (lakes in this area are called tarns), were monochromatic but stereotypically Christmasy. At the highest point of our frozen hike, the 3:30pm sunset broke through to give our black and white little world some fiery colour; magical. It really was very nice and at the end of the day I had to reluctantly thank Maryanne for dragging me out of the homey warmth of Footprint. This was just as well because the homey warmth, in spite of the effort of the heaters, really wasn't that homey nor warm.

Earlier that morning, before we left, I found I could not get water in the galley sink because the pipes from the port tank on the other side of the boat had frozen. One of my clothes lockers had also frozen shut; glued to the outside of the hull by a pair of frozen t-shirts. The night before, while making the bed, I'd discovered our mattress was frozen to the hull at it's foot - where the condensation had turned to perma-frost. Don't worry though, the top of the bed (the part we sleep on) stays nice and warm throughout the night and by the end of the evening I'd managed to melt enough of the pipes to do the dishes following our traditional Christmas dinner of potato soup (using the ice cold tank water).

The almanac tells us that tormmorow tomorrow we'll have 29 more seconds of daylight than today, now we have finally passed the winter solstice - bring it on. Every little bit brings us closer to the spring that seems so far off right now.

[Maryanne]YES! we had a car. We were not expecting to have a car for the Christmas break, but Kyle's messed up work commute left me booking one as an emergency, thinking I'd have to travel to Edinburgh on Christmas day to collect him. Luckily he made it home a day earlier than we expected (and 3 days later than planned originally) - so we were left with a car and no mercy mission. Without a car, I'd have been happy to spend Christmas holed up with the heating on full, but with a car, I was determined to explore, and I knew Kyle would love it if I could just get him out of his cocoon. We've not really allowed ourselves to plan weekends of 'fun'; priorities have been boat jobs, and dull household chores on our rare days off together. Nobody could convince me though that we should be doing boat jobs on Christmas day - so I wanted to get out and see some of the lovely (relatively local) areas and to show Kyle some of the best of England. As he mentioned, he took some convincing, but it was worth it! We both loved it. 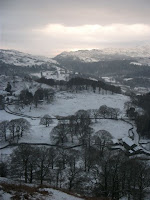 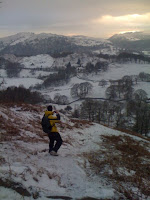 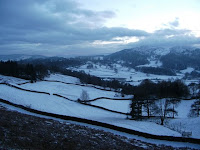 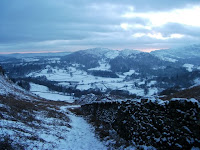 Cristmas Day walk - a rare moment with the Lakes (practically) to ourselves
Posted by SV-Footprint at 3:17:00 PM

Email ThisBlogThis!Share to TwitterShare to FacebookShare to Pinterest
Labels: England, Off Boat Side Trips

Merry Christmas to you both, it sounds like a wonderful way to spend the day!

Merry Christmas to you both. Slightly mad thing to do on Christmas day but then I wasn't the guy to sail across the Atlantic!

You two are utterly and completely bonkers! Hang on to this - sanity is not worth it.

i agree - you're much more interesting as nutters! i'm glad you braved the cold and went exploring, it sounds wonderful. gorgeous views too! and i'm sure it made your "cozy" boat seem cozy. happy christmas a day late!