[Maryanne]With Kyle off to work I was left to entertain myself in Pisa for a week (along with a week’s worth of boat jobs to do also, but priorities and all that!).

About 17 years ago, I found myself in Pisa under very different circumstances; my best friend Annie and I were doing a ‘grand tour’ of Italy. That trip of perhaps a week has given me hundreds of fond memories. We rented a car in Rome which provided enough entertainment in its own right. Both Annie and I prefer our own driving to that of the other; at that time Annie drove like a snail (bicycles overtook us) and she thought I drove like a F1 racer so we’d race to the car each morning to bag the driver position We travelled to Sienna (and ate pizza in its beautiful square Piazza del Campo), Florence for its great art, San Gimignano with its Manhattan skyline of medieval towers, and Pisa for it’s single famed tower (the town was mostly closed when we arrived – oh, and we got a parking ticket which I believe we have still to settle!).. Annie was visibly pregnant at the time so it was left to me to sample the local wines. It was a most wonderful road trip. So many fond memories, and these are refreshed now I find myself again in Pisa. 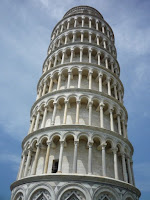 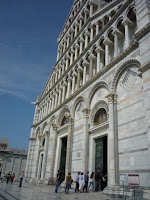 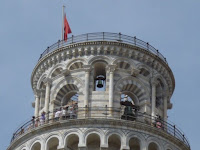 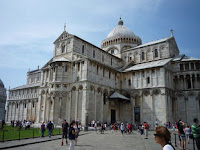 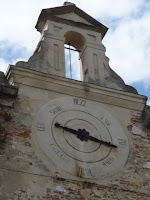 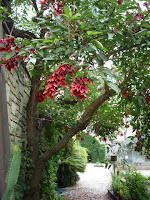 A pretty impressive wind gauge/dial found above the tourists in Piazza del Duomo - and a beautiful flowering tree from the botanical gardens
Since I’d be based here for a week, and I’d already ‘seen’ the tower, I was able to focus on the rest of the city (OK, so I did go and see the tower again, several times, when in Pisa and all that). I, like so many tourists, had focused on the tower and ignored the rest. I was amazed at some of the beautiful squares and gardens not a block away from the tower that were empty of tourists, while the main “Square of Miracles” with the leaning tower was overrun and many tourists deep.

I had a bit of exposure to underwater archaeology was really excited at the prospect of visiting the “Museum of the Ancient Ships of Pisa” (see here) which opened in 2010. An excavation and building work of some new railway buildings uncovered an ancient harbour complete with 16 complete Roman boats, (1st century B.C - 4th century A.C.). Nine of the boats were recovered and preserved over a 10 year period and now on display. No other ships of this age and completeness have ever been recovered, and these are especially well preserved for any wooden vessel, and in some cases included cargo and tools (indicating perhaps flash flood events, or unexpected sinking, led to their loss? Rather than simply abandoned old boats). Various web searches had led to conflicting information on the opening hours, so I eventually asked at the Tourist Information office. Unfortunately I was advised it had been closed for about a year (after only opening last year) due to ‘financial issues’. Oh well, one less thing to spend my money on I guess – what shame. 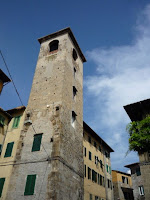 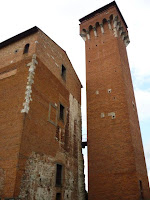 The 'other' Towers of Pisa, to fortify and protect, are common along the old city wall
Pisa is an historic University town (University officially founded in 1300’s, but active since 11th century), so away from the tourist focus, there is plenty else buzzing in Pisa. There are ancient walls and along the wall towers aplenty around the city. There are Roman ruins, tranquil piazzas, arches, coffee shops, restaurants, market places, churches and a labyrinth of passageways to explore. So without too much focus I was happy to wander around Pisa and discover accidentally what it had to show. 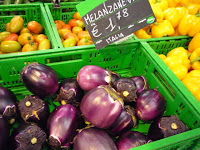 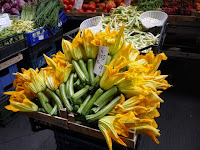 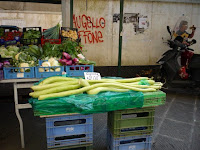 Must eat your greens (and yellows and all colours)
Italy is the home of the ‘slow food movement’ with its goals of promoting alternative to ‘fast food’, and one of my hopes during my time here is to do more cooking and pick up a few tips and recipes. The vegetable markets are an obvious place to linger, and for now I’m finding it a bit of a culture shock to be surrounded by unknown vegetables, or even known vegetables looking very different (courgette/zucchini with flowers attached – apparently you can eat them, aubergine/egg-plant in sizes much bigger than I’m used to, and in many different colours, and many other examples of strangeness). I feel I need a guiding hand before I’m brave enough to experiment! 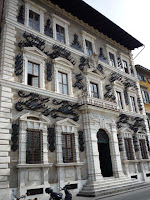 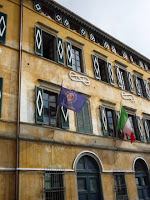 Buildings preparing for the luminara
Next weekend (unfortunately we’ll miss it) is the luminara festival here in Pisa. The bridges and buildings lining the river Arno are covered with small oil lamps (arranged to outline the windows and building features), candles float on the river. All lit at sunset, the Arno becomes the place to be and just in case there wasn’t enough sparkle the evening is topped off with a firework display. Clearly the preparations are well under-way with the boards for placing the candles already fitted to many of the buildings.

So among my boat and household chores I had several excursions to Pisa (mostly on my fast deteriorating bicycle – it’s about a 35min ride on flat terrain). I have working cell phone and Internet service aboard now (big relief!), and I managed to befriend and meet up with another Couch-surfer to enjoy a stroll through the botanical gardens and a coffee in a trendy student hot-spot - thanks Ariadna. Progress with my Italian: Poor. Oil change: done. Not a bad week at all, all I need now is my husband back, such a shame he was unable to enjoy it too. 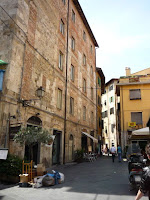 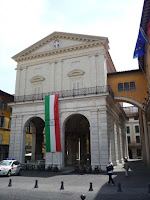 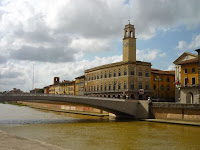 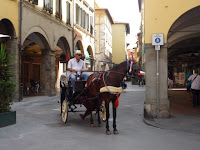 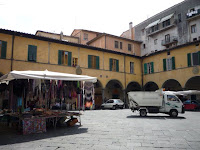 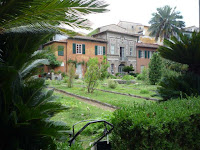 Different views of Pisa
Posted by SV-Footprint at 11:43:00 AM