[Maryanne]By some fluke of luck, Kyle actually made it home. Flights to Rome were all way overbooked, but he managed to squeeze in on a flight to Milan, and then take the 5 hour train/metro/bus journey from there to home. Ideally he wanted us to move on to the next port, but luckily the winds were against us and he agreed to have a day of sightseeing in Rome instead (whew!).

Now Rome is a pretty big place and there is enough to keep any tourist busy for a Month. We had just one day, and needed to have Kyle rested at the end of it for him to return back to work - so we decided on a relatively easy day of a very limited number of sights. #1 on Kyle's list was the Colosseum and somehow we made it there before 9am in the morning (despite the hour long commute into Rome).

{Kyle: The weather, apart from having winds going the wrong way, was gorgeous. The skies were blue with only a little puffy cloud here and there and the temperature was just barely on the hot side of comfortable in the high summer sun. That, combined with Maryanne's enthusiasm, made it unthinkable not to make the most of the day.} 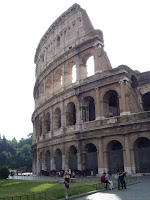 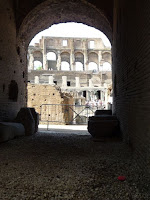 A sight that needs no introduction; somewhere in Paris Kyle joked.

Apparently the name Colosseum is a relative new, and not technically correct, but if I said we went to the Flavian Amphitheatre you wouldn't know what I was talking about, now would you? {Kyle:The name arose because it was near a colossal gold statue of the Emperor, later modified to represent Apollo, that towered over the city.} 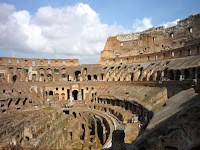 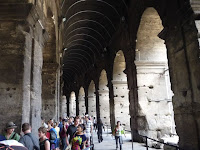 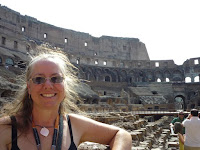 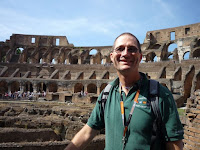 Evidence - we made it! (and I need a different conditioner).
You'll have to take my word for it that we were BOTH there at the same time
The central floor area, which was wooden, filled with trap doors, and covered with a thin layer of sand to make it look like the ground now lies exposed, and you can see the workings of some of the maze of pulleys and systems that would lift gladiators, lions, etc., on to the arena floor (oh, and did you know arena comes from the Roman word for sand that they used to soak up all the blood?). Our audio guide explained that the system was way more impressive than just raising the occasional animal, at one point it was recorded to raise a giant model whale, which once at the surface opened it's mouth to have 50 live wild bears traipse out into the arena. Apparently whole hills and forest scenes were sometimes part of the set that would appear and disappear during the productions. Oh, and all the shows were free to all (you just had to sit in the right area for your 'type' and in the seat assigned by your ticket; all very organized. {Kyle: The shows basically were of three types: Punishing criminals (i.e feeding them to the loins, or bears or anything else vicious and handy, Gladiatorial fights to the death, and hunts of wild animals. Often, all three would be taking place simultaneously on multiple sets. When Constantine came into power, the first two were banned. The hunts continued, but over time through attrition, it got hard to find good animals and hunters. The quality of the shows declined, attendance went down and the great amphitheatre was closed, falling into disrepair.} 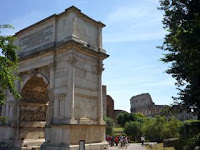 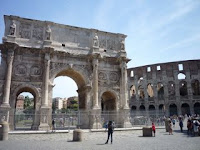 Arco di Costantino - One of the many giant commemorative arches around Rome stands right outside the Colosseum
Our entrance ticket to the Colosseum included a couple of other nearby ancient sites, so this helped dictate our day. From the Colosseum we headed off to the Beverly Hills of its day, THE address for the elite of ancient Rome - Palatine Hill. This is a large site of temples, and homes, more stadium, and beautiful gardens (and lots of hill). 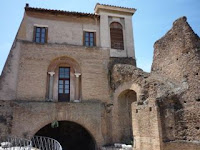 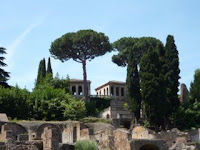 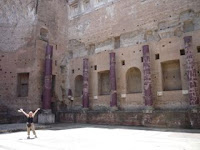 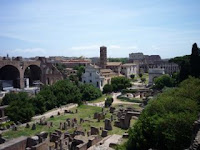 Palantine Hill - Rome
....And then on to the once covered market place - the Rome Forum. {Kyle:Most of the structures have crumbled away or been rebuilt over several times, now buried, but the height and placement of the remaining columns give a sense of how enormous this place was. The roof was perhaps ten stories up and covered an area of several modern city blocks. 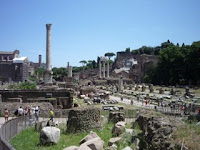 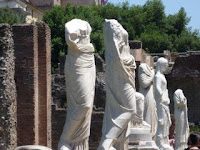 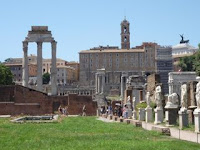 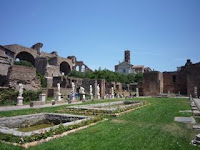 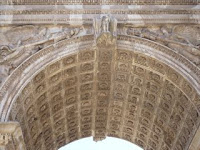 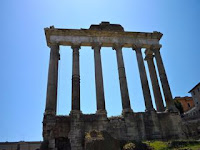 Roman Forum Area
Additionally, The Forum area was home to the house and temple of the Vestal Virgins of Rome. A High priestess group tasked with keeping the sacred fire burning (among many other things). They were expected to be chaste, and if believed not to be would be buried alive (with food!).

It is also the site of Shakespeare's 'Friends, Romans, and countrymen' speech by Mark Antony in the play Julius Caesar. So there is plenty to ponder as you wander around.

Exiting the Forum, we had a few ideas where we might go next, but were soon sidetracked by the impressive (and modern - 1920s) building - the National Monument to Unified Italy's first King (Vittorio Emanuele II). It's hard to comprehend but Italy is a relatively new country (only unified in 1861). This monument hosts a number of functions, but at first sight is a very impressive blazingly white marble building, with grand staircase and giant columns, and with humongous statues on every available corner. It's simply impressive. A closer look shows it is also the home to the Tomb of the Unknown Soldier, and 2 eternal flames protected by armed guards, while being perfectly accessible. I wonder if the guards are buried alive if the flame goes out? The building is open to the public and holds a museum of Italy's history and fight for unification. Apparently you either love it or hate it, and it has many nick-names including the wedding cake and the type-writer. We loved it. {The building gave us a sense of what ancient Rome must have looked like in it's day. Almost all of the massive stone and brick ruins were once also covered completely with marble. The bricks remaining now were just the studs in the walls, so to speak. 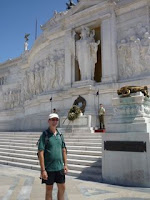 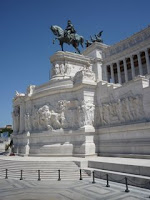 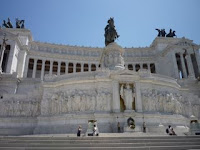 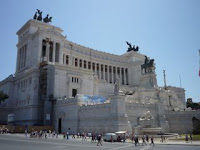 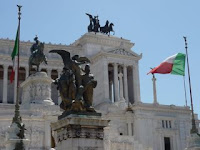 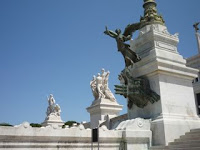 Italian National Monument to Vittorio Emanuele II
We considered going up the glass elevator to the very top for 360 degree views of Rome, but decided to call it a day and start to head home. Naturally we stopped for ice cream on route to beat the heat of the high sun; Rome will still be there another day and we are hoping to have plenty of time to explore it, in the mean time Kyle had to get back to work.
Posted by SV-Footprint at 2:12:00 AM

i'm so glad kyle made it home & the two of you enjoyed a day in rome together! i know the coliseum would have been my favorite - live bears exiting the mouth of a whale? see, this is why i love the ancient romans - they were sickos, but they were BRILLIANT sickos! and at least they buried people alive along with some food - i mean, they weren't total animals! heading to the afterlife without refreshment? how rude! i'm not grasping how italy only became a country in 1861, so that will provide some fun online research this afternoon. i hope the 2 of you will be back for another roman adventure very soon!

Do they still consider the Vittorio Emanuele monument to be a hideous scar on the Eternal City?

"Coed" is a perhaps old fashioned term for a female college student. I knew this girl was a college student by her conversation and the fact that she was covered from head to toe in North Carolina State University-branded clothing.

Chris... Definitely mixed public emotions on the monument. I'm pretty sure they bulldozed away a lot of 'old Roman stuff' too. But we liked it.

In British English we have 'mixed' schools, and don't have a special term for a girl in a mixed school. Coed does sound old-fashioned, and probably politically incorrect, but now I know something new, and won't feel such a dunce next time I come across it! Thanks for the info.