[Kyle]Kate and Mark were unfortunately unable to make it for the weekend. Maryanne and I decided to skip the stress of Baltimore altogether and took a longish sail up the bay in light winds.

As it was a holiday weekend, boats were out everywhere. Most were being operated by people who I assume only get out two or three times per year, and made for alternating frustration and entertainment. The radio on channel 16 was filled with the continuous noise of angry people screaming at others about their wakes, or wondering why a commercial fisherman was upset with them after motoring over fishing gear. We weren’t in the main harbor, so it affected us mostly by just making the radio chatter annoying or entertaining.

The most entertaining moment was when a man called the Coast Guard saying he was lost. When they responded, he gave them a GPS position, and told them he was just outside Pleasure Island. Someone asked if he had a chart. He responded that he did, and that he was lost. At another point, a spaced out couple on a powerboat came over to us and yelled “Middle River”. After a little confusion, we were able to determine that they were completely lost and were asking us which way to Middle River. We gave them our best directions, but Middle River was far enough away that we were sure they wouldn’t make it all the way without finding someone else to ask.

We found a couple of boats going our direction and tried to get into informal races with them, but they were tippy boats dragging big pieces of lead so as soon as we unfurled our sails, they would soon shrink behind us toward the horizon, ruining our fun. 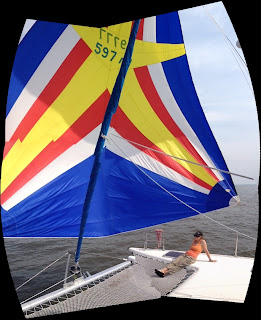 As afternoon arrived, the wind began departing. We managed to keep up our speed by hoisting our spinnaker for a while until even it wouldn’t stay filled anymore. We fired up the starboard engine for the rest of the way to our anchorage at Still Pond. It was more full than we had ever seen, but there was still plenty of room for us to pick out a relatively secluded spot for a quiet weekend aboard. The forecast was for a high probability of rain, so we decided not to have any plans, per se, but to just take it as the weather allowed. It’s nice to be back together aboard our own boat.

Email ThisBlogThis!Share to TwitterShare to FacebookShare to Pinterest
Labels: Chesapeake