A Beautiful Day in Boston 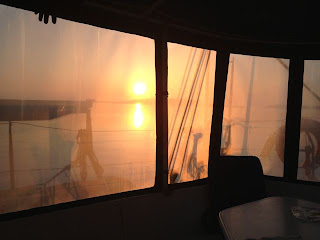 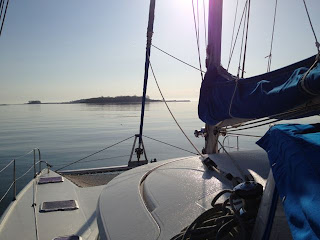 Beautiful Sunrise as we prepare to leaving the (now tranquil) anchorage to head into Boston proper!

[Kyle]The anchorage at Long Island (one of the Boston Harbor Islands) was perfectly flat in the morning at sunrise. We pulled up the anchor and had a quick trip the last few miles to the Boston waterfront with the help of a rising tide.

Since we’ve still managed to beat most of the crowds to the sailing season up here, we were able to pick up a mooring right in front only a water balloon’s throw from the dinghy dock or a soft shout from the people enjoying the public pier, or perhaps the other way around. (I didn’t!).

As we were finishing up our arrival checklist, Mark, the marina guy came out and offered us a dock for our stay for the same price as the mooring. Being able to step on and off of Begonia onto a dock tremendously convenient. The dinghy dock wasn’t too far, though, and the weather was supposed to be nice for the foreseeable future. Our mooring was in such a beautiful spot, and as the tide came in and out, we would have rotating-restaurant views as we swung on the currents. We decided to stay put.

For the first time all year, we got to launch the dinghy and go through that whole learning curve again. We rowed ashore. I had a long shower and shave (the beard was starting to get itchy) while Maryanne checked us in. Boston Waterboat Marina is small, but well equipped. The best thing, though, as I said before, is that it’s right in the middle of everything.

After a quick round-trip to Begonia to change, we headed out to tramp all over the city center. We had no itinerary, just a vague plan to wander in a rough circle. The only thing I specifically wanted to do is end up in the North End for dinner – Boston’s Italian neighborhood.

From the waterfront, we headed inland using our, “Let’s go that way because it looks more interesting” method. The first place we came across was the Quincy Market and Faneuil Hall, both packed with people out enjoying what was probably the second nice day of the year. The sun was shining. The trees were blooming. All of the tables at the outdoor cafés were full. It was a great day to be outside. 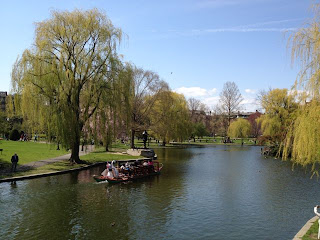 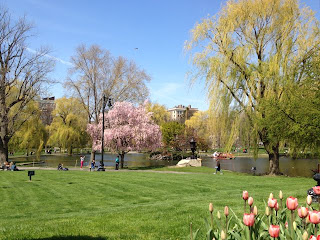 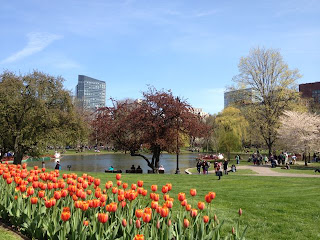 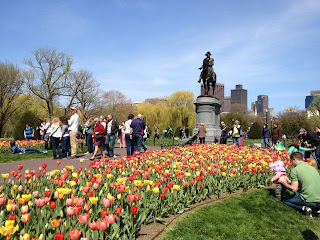 From there, we made our way to Boston Common and the Public Gardens. The grass was green there and the flowerbeds were all blooming. Lots of people were out having picnics or just enjoying a nice walk in the park. 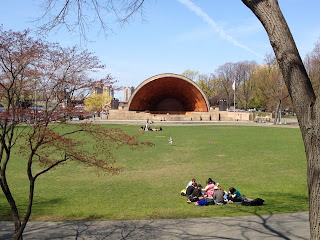 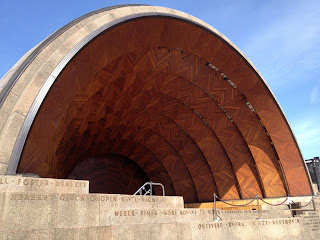 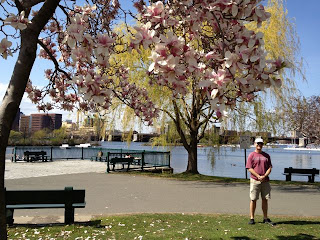 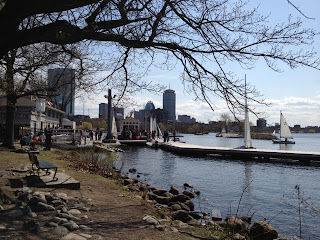 The Esplanade and Charles River Basin - With the Hatch "shell" where many free music concerts are held. Sailing is encouraged for all with a very modest annual fee for unlimited use of boats and training

We made our way to the Esplanade at the Charles River (another fantastic public space filled with Bostonians enjoying the novel sunny weekend), along with tons of people out sailing in dinghies and small boats. It looked like a nice place to bring the Pudgy except for having (possibly) having to portage it around the lock and over the train tracks to get in.

We were getting hungry by then, so we made our way inland into the North End for an early dinner. One of the hardest things in a neighborhood like this is getting past all of the delicious smelling food on the edges to get to what you want in the center. I was heading specifically for La Famiglia Giorgio’s. We had eaten there before, the last time we were in Boston, and I remembered it as being the best Italian meal I’ve had. Actually, the meal we went out for with Pasquale and Enzo before we left Italy in 2011 squashed that one, but it is still the best non-Italy Italian food I’ve had. I hoped my memory was accurate.

We weren’t disappointed. The food was (again) amazing. I had Big Al’s Arrabiata with deliciously tender chicken and Maryanne had a Mushroom Linguine Cacciatore. I swear, each plate had a pound of pasta each, plus there was lots of bread and salad. After dinner, our server asked if we would like dessert. She said they had only one special dessert – a lava cake. I couldn’t imagine they sold many desserts here. Maryanne mused that one special dessert was literal. Perhaps they only make one and keep offering it to their overstuffed patrons until they sell it, maybe once only every few days, then they start making another one. I would have loved to be the guy to take it off their hands, but no way. Try the next table. 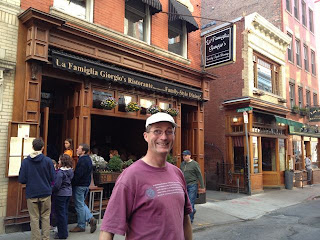 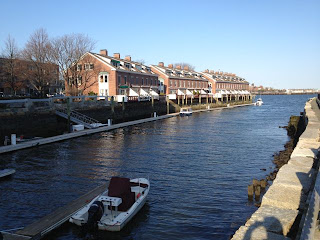 There was no way Kyle was not returning to this restaurant, he'd been bending my ear for days - I'm so glad we found it again... and boy did we need that walk back to the boat after such generous portioned and excellent food.

We waddled back to Begonia along the various piers of the waterfront (Maryanne made me walk the length of each one) in a vain attempt to work off our meal, enjoying the ambiance of the indoor/outdoor restaurants and the little parks. Boston really is a beautiful city. It was starting to get a bit chilly. I had optimistically dressed for the full midday sunshine, so was fine except in windy, shady spots. Maryanne was more pragmatically attired in jeans and a hooded sweatshirt, giving her a more durable comfort. The walk back was increasingly a comedy routine where Maryanne would stop to make a big deal about examining a new blade of grass or carefully reading a historical marker while I shivered and pled with her to get moving. I know I could learn something here (I will NOT!), but being cold was actually part of my plan. I had to get up early for work the next day. Being comfortable would have made it way too easy to stay out late. I really needed to be home by sunset, and we were. Nightcaps in the wind protected cockpit as the city lit up was the perfect end of the day.

That really does sound like a perfect day! As if Boston was waiting for you so she could show off all the flowering trees and tulips, too. Very jealous of your delicious (and still quite authentic) Italian meal. I was laughing at the thought of Maryanne purposely taking the slow route back to Begonia as Kyle shivered alongside! All I can say is, I'm still so grateful to Maryanne for lending me her pull-over that day in Manhattan; it's all well and good to be optimistic, but I would have frozen! Thanks for the wonderful description of your day in Beantown.