[Kyle]With Begonia back in order and with some time on our hands, we decided it was time to enjoy panama and do what we do - go sailing.

Actually, the last time we had the sails up was the day we arrived in Colón over two months ago. Considering the surprises some of the other systems had given us, we weren’t entirely sure the day would be trouble free. We decided to take it easy and sail to our first Pacific Island.

The anchorage on the north side of Taboga Island is only six miles from where we were at La Playita. It lay just on the other side of the Balboa explosive cargo anchorage, where the big oil tankers like the Mobil Pearl wait their turn for a northbound canal transit. From La Playita the peaks of Taboga could be seen rising up behind the anchored ships.

We started both engines without trouble, put them into gear without trouble, and motored clear of the hazards west of the entrance channel and into the anchorage. As we were leaving, we passed a big powerboat whose various alarms we had been hearing for the last few days. We had also heard someone whistling to get someone’s attention, which we often thought must have been us, since we were nearby. Once we passed by their stern, I saw their alarm system – an African Grey Parrot! Of course! I whistled back a few of the noises my greys liked and we spent the next mile or so having an animated conversation in Parrot. I think by the time we were out of earshot, I had taught him the theme to “The Andy Griffith Show”.

The wind started dying the moment we left La Playita. By the time we got to the explosives anchorage, it was six knots from dead ahead, the same as our speed. When we shut down the engines and coasted to a stop, so did our wind. Oh, well. Even if we did end up motoring the last four miles to Taboga, I still wanted to put all of the sails up and have a good look at ‘em.

I took my time, cranking slowly at the halyard winch, pausing every now and then to check that everything was going smoothly. When I was done, I had a look and was pleased to see that everything was still in good order. To our starboard, in the direction of the mainland, ripples started to appear on the water. I watched it come closer for a minute, and then returned to the cockpit. 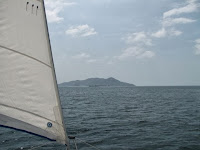 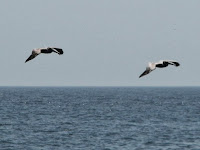 It was not just Begonia catching the wind, but the brown pelicans were out too

As I sat down at the helm, eight knots of cooling breeze arrived. The mainsail filled and Begonia started moving forward. I unrolled the jib and we were suddenly going eight knots ourselves! We decided not to head directly for the anchorage, but instead to go the long way around the two-mile long island.

It was marvelous, relaxing sailing! We slid silently around the uninhabited side of Taboga, which is designated as a nature preserve. When I say uninhabited, I mean by humans. Taboga is home to half of the world’s population of Brown Pelicans, as well as large flocks of Cormorants and, for some reason, Turkey Vultures. I have never seen so many pelicans in one place in my life. They really are the most graceful, adorable birds, and they never seem to make a peep. Maryanne says their disposition reminds her of that of a kindly old Labrador retriever.

At the anchorage, which lies to the south of a narrow sand spit connecting Taboga with a small hill, we found the anchorage to be too steep to for our liking. We went around the hill to the less protected north side and anchored in flat sand along the shallow beach. 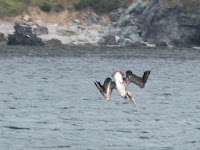 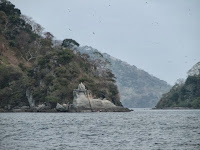 Watching the pelicans fish, and then simply hanging out in the anchorage enjoying the view - a nice relaxing day

It was marvelous to sail again. Begonia was loaded way down, with full food, fuel, and water for the extended passage to Hawai’i. We’ll need to replace what we’ve used since leaving Colón, but Begonia is basically as heavy as she’s going to get. It was gratifying to she that she can still kick up her heels and give a fast, comfortable ride in such conditions.

We split a bottle of wine that our friend Chris had given us in Norfolk as we watched the sun go down while pelicans and a few frigate birds soared in the updrafts to windward of the island looking for their last meal before roosting for the night. It was an altogether lovely ending to a great day.

Email ThisBlogThis!Share to TwitterShare to FacebookShare to Pinterest
Labels: Panama