Made it to Hawaii!

[Maryanne]For those of you following our blog, a quick note: we made it! Arrived yesterday and will clear customs today (although we did get permission to go ashore yesterday and enjoyed a walk on solid land and some food that someone else got to both cook and wash-up).

The passage from Panama to Hawaii via Galapagos has been a little too eventful, what with cutting short our time in Las Perlas islands due to weather and Kyle's work, striking a whale, a tsunami alert in Galapagos, losing a rudder, and averting a fire aboard; enough adventure for anyone really, and I know that many of you that follow along have your own adventures (both wanted and not) too.

We are safe and well, and happy to be here in Hawaii. Will post proper updates with pictures once we are settled in.

Thanks for the great friendship and support of all those who watch over us and follow along.

Updated after the fact

The next morning, another ship popped up. It turned out to be the last we would see for the rest of the journey. It was the CS Onsan. Our conversation started informally at 4:40 am:

CS Onsan: “Are you the boat seven miles off my starboard bow?”

Me: “I must be. We must be the only two boats way out here. This is the sailing catamaran Begonia”

CS Onsan: “Where are you going?”

CS Onsan: “That is a long time. Are you a sailing vessel?” (Referring to our running lights. He would have only seen a sole green light).

CS Onsan: “We are on our way to Chile. We left from Russia. The passage is about 30 days. You are only the second boat we have seen.”

Me: “That is almost certainly true, but you don’t want any adventure on a big ship!”

CS Onsan: “Yes, yes. I suppose that is true! Pleasant voyage to you.”

The next few days were more of the usual: Tailwinds and strangely uncomfortable cross-seas. This trip was starting to get tedious.

Maryanne continued to amaze with culinary variety. She made chilis and Thai curries and even managed homemade cheesecake! Yummy!

On about day 30, the seas started coming from the same direction as the wind and the ride improved significantly. We gybed the jib and were now on a dead downwind, wing-on-wing point of sail for Hilo.

We would go back and forth between having the sails all on one side and having them one on each side as the wind shifted slightly this way and that. After coming on watch at midnight on day 32, I gybed the jib back to wing-on-wing (one sail left, one right) and was rebuffed with a croak. A Brown Booby was perched on a spreader and didn’t like the sail flapping nearby and scaring her. She held her ground, though, and rode with us through the whole night watch. Every time I would shine a light up there, she was wagging her tail and preening her feathers. It was calm enough by then that even up there, she has a pretty smooth ride. I got used to hearing her toenails clicking on the aluminum as she tried to balance herself every time there was a little more motion than usual.

A dawn gybe sent her fluttering away. She tried to return, but couldn’t find a clear approach. The wind was such that I couldn’t keep the jib from filling and collapsing. Eventually, I just gave up, pulled down both sails and hoisted the spinnaker.

Suddenly, we were flying toward Hawai’i and using hardly any rudder in the process to boot. The spinnaker stayed up all day and night without giving us any of the usual trouble.

Day 34, 1:19a.m.: Land Ho! I spotted the light of a radio tower above Hilo at 43 miles. After that, the city’s lights slowly revealed themselves, intermittently disappearing as rain showers blotted them out. 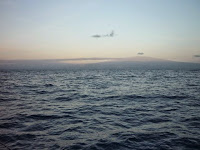 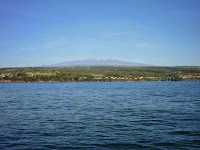 Around sunrise, we got close enough to the Big Island to feel its effect on the trade winds. The wind slowed and then shifted ahead. Maryanne was up by then, so she stowed the spinnaker while I hoisted the other sails. The wind then moved further and further forward until we had to bend our course north of the harbor entrance until we were paralleling the shore. Then it died and it was time for the engines. 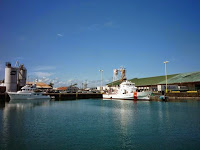 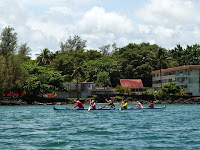 We decided against Radio Bay which was very quiet and only had one boat other than the Coast Guard cutter, but there was no doubt we were in Hawaii!

Typically, Customs clearance is done in Radio Bay. Once I had cell phone service, I called up the Customs guy. He knew we were coming. He was just about to leave for the day, so he took down some basic information over the phone and cleared us to go ashore. We could do the actual paperwork the next morning. This meant we could anchor out instead of paying the fees to tie to the wall at the commercial dock overnight. Radio Bay has water, though, which we would need more of before we left Hilo, so we pulled in anyway to refill our tanks. Now we wouldn’t have to pull up our anchor mid stay just to get water. While I was filling the tanks, Maryanne stole away enough time for a nice, long shower.

We left Radio Bay and motored the short distance to Reed’s Bay, just outside the commercial area of the harbor, where we dropped anchor amidst a dozen other boats, many of which were clearly locally owned. We made it!

Congratulations! I bet there weren't any complaints about trading in your sea legs for a bit of "Hawaiian mundane" for a short while - if that's even possible with you two. :-)

Looking forward to reading about the final leg of the voyage and your new home.

Indeed, you did make it! No one really had any doubt - but that didn't stop us from worrying. Just a bit, mind you. So very happy to know you're there at last!