[Kyle]There wasn’t much wind forecast for our short trip across Monterey Bay, so we left early to allow plenty of time. After an hour or so of motoring, a light wind picked up and we were able to shut down the engines and actually sail again, albeit at a mediocre speed of 3-4kt. 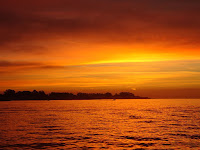 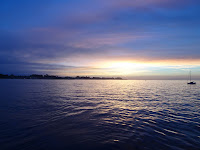 On arrival in Monterey (the harbor) we were greeted much as we had been in Santa Cruz – by otters and sea lions popping up to give us curious looks as we went by.

The harbor breakwater soon showed itself to house an active mass of sea lions atop giant boulders.

The forecast for the following few days made it nonsensical to continue south, and left us with no choice but to enjoy an enforced few days in Monterey. A large north-west swell coming into the bay from distant storms off-shore left us believing the anchorage would be too exposed/uncomfortable, and we splashed out on a dock at the marina for our stay.

When we called the harbormaster on the radio we were assigned a slip for our boat – an end-tie that was the closest possible to the entrance to Fisherman’s Wharf. In addition to have a very fair/reasonable rate for dockage, the staff at the harbor were also very helpful and friendly – probably the BEST marina experience we have ever had. Kudos guys! 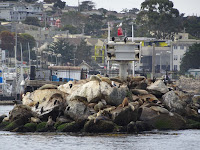 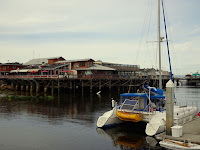 Until this point, the main reason I had ever visited Monterey was to seek out the BEST clam chowder I know of on the west coast (from Old Fisherman’s Grotto on Fisherman’s Wharf). Since we were now residents for four days, it was about time to explore a little further afield!

Since we were told to be expecting wind and rain much of the weekend, and the weather was sunny and mild when we arrived, we set out immediately to explore. Naturally we started with Fisherman’s Wharf where we received the first half of our dinner in samples of clam chowder and were able to verify that Old Fisherman’s Grotto was still the best!).

The next day we headed further afield and took the trail to the North towards the Cannery district (from the short lived Sardine fishery) and the wonderful Monterey Bay Aquarium.

Maryanne was still hoping for a chance to see Monarch butterflies and we ventured into the tourist information office to seek advice on their numbers (and if it was worth walking on to the Pacific Gove area). A rather rushed and curt assistant advised us that so far there were probably only 50 butterflies so far, and since it was so windy today we’d be lucky if we saw one – that saved on that walk!

Many of the historical cannery-era buildings are still present and have information boards along with a telephone number you can dial to get an explanation of how they were used. Eventually we’d had our fill and made our way back to the boat, via an excursion to the grocery store.

Returning with our groceries, we took a detour to the Old Fisherman’s Grotto for take out chowder which we enjoyed from the cockpit of Begonia in time for sunset.

We were up ‘early’ the next day to take a couple of walking tours of the area, one by a local historian (who specialized in the wharf and the town sardine fisheries), and one by the park service (covering one end of the Monterey Historic State Park). Each tour covered slightly different areas, but with a bit of overlap with some of the buildings. The state park consists primarily a number of original Adobe buildings scattered across old town Monterey and each with a significant historic connection. And Monterey has a LOT of historical significance. Originally a Spanish town, then Mexican (on it’s independence from Spain), Monterey was the capital of ‘Alto California’. As a result of the Mexican-American war, the state of California was formed and it was in Monterey where the first Californian Constitution was written (in both English and Spanish!) 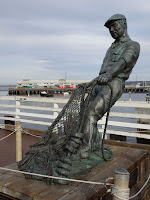 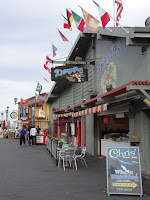 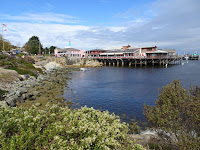 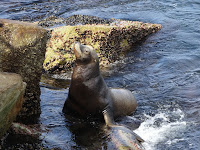 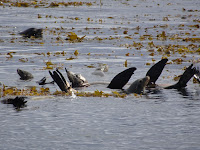 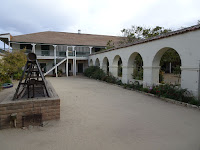 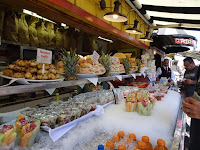 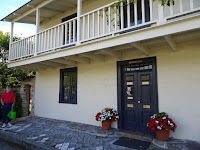 History, food, and wildlife - what a great mix.
And that side-walk in the last picture is made from Whale Bone!

The Casa Del Oro held the only safe in town (to house the gold that returned from the north once the gold rush started), the original customs house still stands and acts as a museum, and so many other buildings from whaling, California first theatre, etc. Since it was also a special History weekend for the city, there were additional buildings open to the public, and folks dressed in costume to add to the feel of old California. Of course Maryanne could not limit herself to the few buildings visited in the tour and we spent the rest of the afternoon visiting the remainder that made up the State Park. For some reason there was also civil war reenactments going on in town as part of history week, and we were regularly reminded of this with the odd cannon fire blasting the otherwise tranquil day.

The history of the town crosses paths with many famous names: John Steinbeck, Marilyn Monroe, Robert Louis Stevenson, and many more. While we didn’t find time to visit the Aquarium on this trip – we have been before and Maryanne says it remains her favorite.

The following day it really did rain, heavily, and we mostly stayed aboard preparing for our departure, and tending to boat jobs while enjoying the views, and once there was a break in the weather we took a walk about with no goal in particular. We were SO glad we had some time to finally explore Monterey, now we move on south.