A Shock to the System

[Kyle]Having decided that we had seen Bahia de la Raza in the one day, we pushed a tiny bit further south to Bahia San Gabriel, near the south end of Espiritu Santo.

The evening winds known as the Coromuel were forecast to be a little stronger over the next couple of days and the western corner of San Gabriel was the only place nearby that had even slight protection. We found a spot and tucked in as far as we could where we dropped anchor in the middle of a big patch of turquoise water. We checked our phones and found a homeopathic signal. That’s a memory of a signal with no actual connectivity. 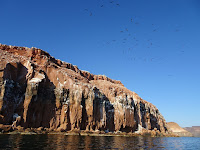 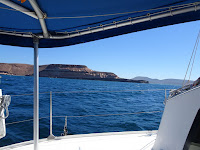 Moving along the island - enjoying the strata and formations on show

We had just settled in for the afternoon when a patrol boat for the Park Service pulled up. We figured they were checking for permits, so Maryanne dug out our receipt from Bahia de Los Angeles and explained that they had no actual permits to issue. They understood and took us at our word without argument. One of them then asked the length of Begonia. When I told him, he apologized and explained that we would have to move, since we were above the size limit for anchoring in Bahia San Gabriel. We thanked them and assured them we would move.

{Maryanne: Embarrassing! We really DO try and follow all the rules, but in our defense, we'd spent over $100 on two sailing/cruising guides to this area and each one lists this as a suitable anchorage with no hint of length restriction.. Doh!}

We started everything up again, pulled up the anchor and headed to the next cove, Bahia Dispensa, which was one of the alternatives the ranger had suggested. It is much smaller and did not appear to be as well protected. If the chart was wrong (as they often are here) and we could tuck way in, we might be able to make it work.

As soon as we came around the corner, we saw another catamaran – a day tour boat, taking up the only reasonable spot. We inched around for a while, but could not find anywhere deep enough to allow us to be actually inside the bay where we could find any land to protect us from the wind. We had to choose between going around all of the way to the east side of the island, backing up as far as Caleta Partida, or leaving Espiritu Santo entirely and moving on to our next stop at Puerto Balandra on the Baja mainland. Feeling a little dejected about leaving the park way earlier than we had expected, we chose the last.

Along the way, we joined the procession of tour boats heading back to La Paz at the end of the day. We seemed to be the only boat that wasn’t carrying twenty people or towing three kayaks.

As we approached Puerto Balandra, one anchored boat after another appeared over the horizon until we could see that it was very full indeed. Puerto Balandra and the nearby beach at Tecomate are very pretty and very close to La Paz. Anybody that wants to go out for a nice weekend of water fun without making an expedition of it will likely go to one of those places, depending on the vehicle. If you don’t have a boat, you go to Tecomate. A look through the binoculars as we passed by revealed a thin white beach speckled with multicolored beach goers and topped with a layer of uninterrupted crushing humanity under restaurant awnings, taco stand tarps and beach umbrellas over its entire length.

Those with boats go out to anchor at Balandra. When we arrived, all of the available anchoring space appeared to be taken. We searched around for a bit before finding a barely big enough spot between a pretty little monohull and an obscene megayacht. There were also a few charter boats and the obligatory sport fishing boat with too-loud music, populated entirely by shirtless guys holding red Solo cups and shouting mostly, “Whoo!” or sometimes, “Whooo!!” Behind that was another, and another, stretching across the entire bay. After the peace and natural beauty of the islands, it was a bit jolting to find ourselves in the center of Spring Break.

After the sun set, the lunch hook crowd left – maybe about a third of the boats. The Coromuel started and the mood in the anchorage became more serious. People went forward on deck to check their anchors and their swing. Only the guests of the big yachts remained in full party mode while their crews could be seen looking everything over and having hushed conversations with each other while conspicuously trying not to spread their concern.

The wind increased until it easily drowned out the stereos and drove everybody indoors. All of the boats seemed to be holding well with the exception of the megayacht we had anchored ahead. The whole anchorage had swung 90˚, so they were now beside us. The wind was catching the big, flat topsides and blowing them from one side of their anchor to the other, yawing them through 180˚ each cycle. From the size of their swinging circle and the angle of their chain, which was a smaller gauge than ours, they seemed to have way too little scope out. Their anchor must have been huge, though, because somehow they held. Their chain was making all kinds of horrible creaking noises and we every time we heard a loud bang we thought it had parted. The one thing they had going for them was a big crew who were likely sober and able to stay up all night to be ready to start the engines at a moment’s notice if needed.

By morning, the Coromuel had increased to 21 knots. We were so glad we hadn’t stayed in the partially protected anchorage at San Gabriel. Even tucked in behind the headland at Balandra, we were bouncing around in chop and spray was being blown on deck. Our megayacht neighbor was still there. They appeared to have let out more chain and were staying pointed into the wind now like the rest of us. 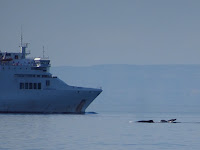 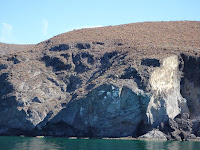 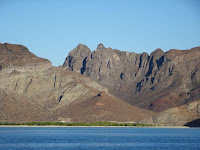 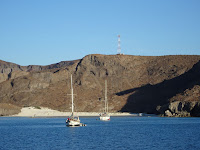 Behind the bay at the top of a hill was the first cell phone tower we had seen in ages. Oh, Joy! It turned out to be the one everybody else from La Paz was using on the long holiday weekend (Monday was Benito Juarez’s Birthday). Data came in at about an email per minute (sometimes two, sometimes five), but at least we had a chance to start chipping away at our internet list.

Just checking in to say hello. Glad you got out of the way of the big winds. Good thing you are both so darned smart..