[Kyle]After Mezteño, we went around the next corner (still on Isla Espiritu Santo) to Bahia Candelero, named such because the rocky spires in the center of the bay kind of look like candlesticks from certain angles if you squint and there’s a little tequila involved. The outcrops of hard rock are the last bit of the crumbling ridge that starts at the top of the hill behind the bay and bisects the white sand beach before plunging into the sea. On either beach are two halves of a fancy campground run by a company in La Paz that caters mostly to kayakers. They are spaced such that it is possible to rent a kayak for a multi-day trip that spends each night in a different camp along the way. There were several boats anchored in the bay and lots of people milling around on various water toys. After quiet Mezteño, it was a bit of a shock to be in the midst of so much activity. 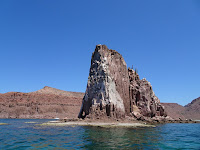 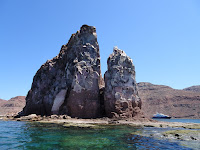 We rowed to the northern beach with the intent of taking what was reported to be a short semicircular trail going behind the rocks to the opposite beach. One other option was a longer trail that went up one of the arroyos to some nice rock formations. We were more than a little wary of arroyo “trails” by then, so we decided in advance to just stick with the short loop.

That was the plan anyway until it became apparent that our trail seemed to be showing no signs of looping back around. We continued a bit further and then a bit further until we found ourselves standing in front of the cave at the end of the long trail. That trail wasn’t bad at all. We had only been walking for twenty minutes. There is just no understanding this place. {Maryanne: This trail, like others in the area also has wild fig trees with amazing root systems, here the fruit is fertilized by bees (rather than wasps), but we were in the wrong season for fruit unfortunately.}

The trail took us into a deep grotto between towering walls of pink and yellow sandstone eroded into abstract shapes. We followed it back to the beach, where a little exploring revealed a narrow passage in the rock leading to the southern beach. That was just too easy. 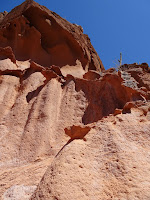 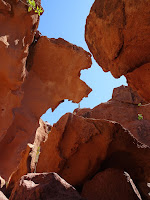 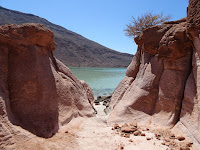 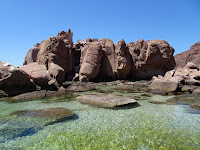 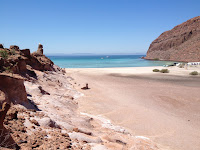 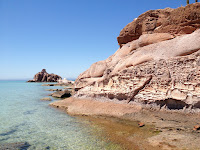 With more time to spare, we did a long dinghy tour of the rocks in the center of the bay. It was very early in the nesting season and just a few birds were starting to claim their nesting spots amidst all of the cliff’s nooks and crannies. The bay turned out to be a lot larger than it initially seemed from aboard Begonia and by the time we got home during the worst of the day’s heat, I was pretty wiped out from all of the rowing. Maryanne was so good. I had barely staggered into the cockpit when she handed me a half-frozen drink from the bottom of our fridge.

As sunset neared, something curious happened. All of the other boats in the anchorage pulled up their anchors and left. We were now getting close enough to the tourist center of La Paz to be encountering charterers and day trippers on sunset cruises. From where we were, boats that had their anchors up just before sunset could be pulling into the dock at La Paz by the time the nightclubs start hopping. We ended up on the trampoline with the whole night sky to ourselves, listening to the cracking fireworks of the rays splashing all around us.

Omg, what a gorgeous grotto. Again, your photos are spectacular treasures. Keep me coming!