[Kyle]From Limu, we sailed to yet another of the islands just inside the reef on the windward side of the group.

Along the way, Maryanne tried again with her fruitless attempt to catch a fish. We've been meeting people everywhere who routinely put a line in the water for five minutes every afternoon while the skillet is heating on the stove. Ten minutes later they're eating the fish they just caught.. We have the same gear and as far as we can tell, we are using it in the same way, but the last fish we caught was in Northern Ireland over eight years ago. Our skillet is warm already!

Poor Maryanne gets so hopeful every time she deploys the line and so dejected when she finally gives up. Just before it was time to bring it in, I looked back and found we were dragging something that looked like a crushed beer can. As she pulled it in, it turned out to be the gaping mouth of an exhausted fish. Maryanne had caught a three-foot Great Barracuda!

Those teeth! Luckily, the poor thing was so tired it had no fight left and Maryanne was able to dispatch it quickly. Between the Barracuda and the coconuts, we were successful hunters and gatherers. For the next three days, every meal would contain lots of both. 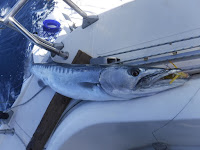 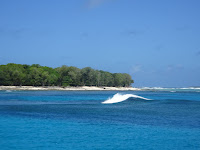 Again, we seemed to be the only boat for ten miles when we set anchor off the northwest side of the island. Lalona had a lot more swell than Limu, which was only partially dampened by the coral surrounding the small anchorage. The motion on the boat was comfortable, but the big crashing waves all around us were a little disconcerting. We swam on our anchor. It and the first twenty feet of chain were buried out of sight in the sea bottom, so we weren't going anywhere, but we were so sensitive to any shift in wind or current that we both slept poorly through the night.

After checking our anchor, we did a quick swim around the perimeter at the coral's edge. It's just getting better. There's more variety of coral and fish and the towers and canyons are all taller.

If the weather had been more settled, we would have loved to stay longer to swim more of the reefs and to have a walk ashore, but we were nervous about getting too far from the boat, so we decided to cut our visit short and head for the next place.

It briefly calmed down a bit just before sunset. On our post-sail rig check, I noticed that we had popped a couple of rivets on our radar mount and decided I would be a lot more comfortable with our next sail if I went up the mast and replaced them first. 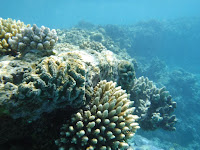 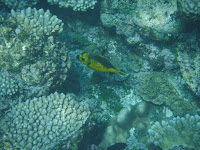 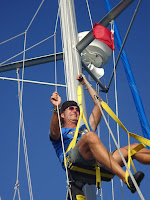 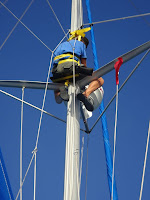 After a short snorkel, Kyle decides to climb the mast to practice his swear words.

Well, the swell was most decidedly NOT gone. I had an hour of holding the mast in a leg lock while I did the work. When I was finished, both arms and legs were badly bruised and my muscles were mush. I told Maryanne I thought I was more sore than I was on the day we submitted Mt. Whitney.

Looks like fun! (NOT) And don't forget to let us know where you submitted Mt. Whitney.