Maupiti - Waiting out the weather

[Kyle]From Bora Bora, we had been planning to go to Maupiha’a, a day or so to the WSW. Maupiha’a has a pass less than three times the width of Begonia which has the reputation of being tricky on a good day. By the morning we left Bora Bora, the forecasts were all converging on big seas from the southwest, which would spill over into the lagoon and make the current going out of the pass very strong. They also were saying there would be strong winds from the northeast, which would pretty much ensure big, standing waves across the entrance. We decided to abandon our plan and have a look at Maupiti instead. Maupiti is only twenty-five miles from Bora Bora and has a tricky south-facing entrance. We had been there the year before, so we decided to head for the anchorage at the town for some variety. 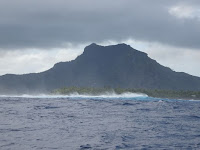 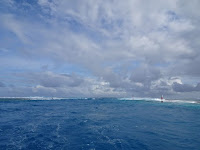 Arriving in Maupiti - pass conditions were a bit rough

Since we had originally planned to be up in time to sail to Maupiha’a, we were the first boat out of the pass at Bora Bora. We cleared the pass, hoisted the spinnaker and had twenty minutes of great sailing. Then the wind all but disappeared and we had a very slow, frustrating, floppy couple of hours while everybody that left after us went motoring by. We were just starting to think we might have to reach for the start button ourselves if we were going to get in by nightfall when we finally got some real wind and took off way faster than we could have motored.

We arrived at Maupiti with about four hours of daylight left. The area around the pass looked pretty scary from edge on. We could see big breakers with lots of spray being blown off of their tops. When we got aligned with the entrance, we could see a definite gap in the surf. We studied it for a bit and then headed in.

Maupiti’s pass isn’t as narrow as Muapiha’a’s, but it’s pretty narrow. It was important to keep exactly on the centerline, as marked by two big range markers, to keep off of the drying reefs to either side. Occasionally, a breaker from one of the bigger waves would sneak into the channel and try to slew us sideways, requiring three quarters of the rudder travel to keep us straight. As we were approaching the narrowest, shallowest part, a really big wave passed just to starboard and cut in front of us. As it passed ahead, the channel, the range markers, everything below palm tree height disappeared behind the crest. All we could see was a turquoise outline at the top and the white spray being blown back towards us. It was probably five long seconds before it receded and we could see that we were still in the middle of the range. We didn’t have enough room to turn around without stopping first and the current was strengthening, increasing our chances of being swept out of the channel until we could get some water moving over the rudders. We decided we had to keep going.

I was completely fixated on doing whatever I could to keep us in the middle of the range as the currents swirled us to the left and right. Maryanne looked behind us and told me another really big wave was just forming in the deep water about nine waves back. She kept watching it and all of the others in between while I focused ahead on the range markers and keeping us aligned. By the time she said we had about three waves to go, we were almost at the first marker, which was a post mounted on the reef at the pinch point. A wave later, I was staring at the range marks when she told me we weren’t moving forward except when surfing. She said, “I know you don’t want to hear this, but we need more power.”

I definitely didn’t want to hear that. Years of flying has conditioned me to always treat engines as gently as possible because lives depend on them. Reserve power is for emergencies only. Use it if you need it, but understand it comes at a much higher risk. Components working near their maximum designed load suffer a much higher chance of catastrophic failure. A bent valve, a broken belt or an overheated bearing anywhere between the engines and the props could easily have resulted in disaster. It was with no small degree of anxiety that I pushed the throttles forward and then pushed them some more and then listened intently for any telltale clunk, whine or cough. We went from moving forward just under half of the time to moving forward most of the time. The next wave shoved us a couple of boat lengths until we were abeam the marker. The big one came next. It curled up and broke. The curler advanced towards us and didn’t collapse until it had nearly gone over the dinghy into the cockpit. At the other end of the boat, our bows were already in flat water, pushing through eddies. We surfed down what was left of the wave and we were in. Holeeee Buckets!

It was a few more minutes before we were going reliably forward enough for me to back off the power. Going straight was still my main challenge, but I managed to sneak a glance at out tachometers. Even after the reduction, we were still at over 3,000rpm. We cruise at 2,400 and redline at 3,400. I definitely avoided hitting the stops, but we must have been close to the latter value. A mile or so later, the lagoon widened out and we were able to reduce to a normal rpm and come on in like it was any nice, sunny day in paradise. It took my personal rpm a lot longer to start winding down after that. We checked over the engines carefully afterward and they seem to have suffered no ill effects. That’s why we baby them in the first place, so they’re there when we need them.

We picked our way up the shallow channel to the anchorage near the town. We had read that there were three mooring balls there, but we could not find them and the other four boats were anchored. We felt our way as far past the end of the channel as we dared and dropped the anchor in three meters of murky water. I was worried the bottom would be all bommies beneath the silt, but when I swam on the anchor later, I was pleased to find us resting over a sandy bottom so fine that it was almost like sand-colored mud.

The guy from the nearest boat came by to introduce himself and invite us to drinks the next night. We met almost everybody else there. Most, it turned out, were planning on leaving for Maupiha’a in a day or two. Conditions were not supposed to have changed much, but they were all going to give it a try. I suddenly started to wonder if we had ducked out too easily. I looked at it again and decided definitely not. That, plus the place was about to have twice as many boats in the anchorage for the amount of space they have. We wished them well and stuck around another couple of days.

We were thinking of de-lifeboating the dinghy and going ashore, but Rob, the guy next door, kept showing up first thing to tell us he just got back from the village and found everything shut. He also offered to take us in his dinghy if anything did open. It never did, so we just spent a couple of quiet days aboard enjoying the view.

{Maryanne: Bob was extremely kind and every day attempted to deliver bread from town to all the cruisers... It never quite happened but not for want on trying on his part. We were grateful nevertheless - intent being just as kind as achievement.} 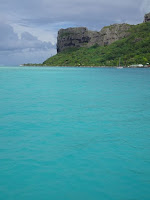 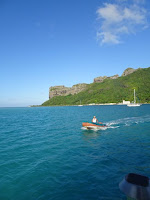 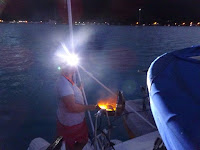 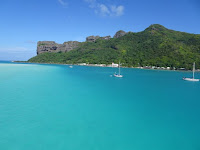 Views of Maupiti
including cooking up a BBQ and the almost bread delivery
Posted by SV-Footprint at 4:02:00 PM