[Kyle]There were eleven boats in the anchorage at Suwarrow, making us number twelve. Right behind us was number thirteen. Last year, I think we got up to nine. It took us over an hour of milling around to find a spot to anchor that wasn’t terrible. There’s really only about three good places to drop the hook here. We ended up on a small patch of sand in lots of bommies, requiring all of our chain floats and frequent swims to untangle the knots made by the last wind shift. 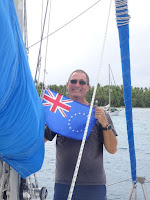 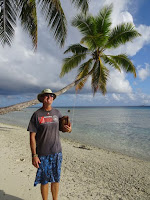 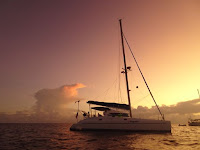 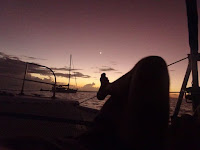 First day back in Suwarrow - we're in paradise again!

In the anchorage were Chris and Elayne from Nemo, John from Hecla of Uist and Toby and Sam from Sweet Chariot. None of them had originally planned to stop at Suwarrow, but then when they got close, they decided it was too good to pass up. We spent the next couple of days mostly with them, getting caught up.

When the weather shifted to the east a few of days later, seven boats left, mostly for American Samoa. Probably two thirds of them needed swimmers in the water to help them get their anchors unwrapped.

With the group size down to a more manageable level, Maryanne the Activities Director arranged with Ranger John for palm frond weaving lessons on the beach. He taught us how to make plates and baskets, either of which can be used as emergency hats in the event of sudden downpours. He also demonstrated how to weave watertight roofing too - he was VERY patient with us. 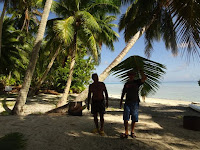 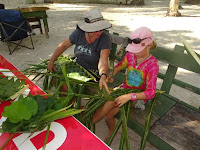 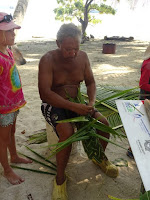 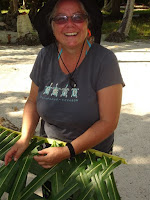 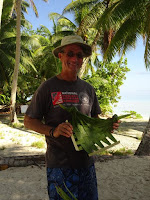 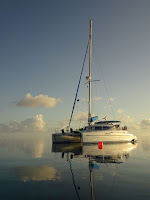 The next evening, Maryanne organized our first pot luck. We got really lucky because that morning, a new boat arrived with a young singlehander, Nick. He had caught a 50 kilo tuna just before arriving and showed up with a salad bowl full of Poisson Cru and more than enough big tuna steaks for the rest us. We all left feeling like we had just had a Beach Thanksgiving. 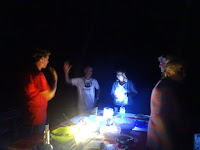 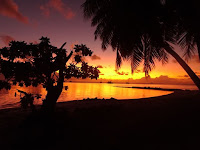 A very busy social life in the middle of nowhere

The following morning, we swam over to Hecla and Nemo to help them untangle their anchors and then bid them both fair winds for their trip to Samoa. We were on our way to a new snorkeling spot when we decided to alter course and say hi to a new arrival. They were nervous about sharks, so we offered to show them where the mantas were and accompany them as bait. We managed to find two for their first outing and only one disinterested black tip shark, which they never saw trying to sneak up on them, so they were happy. 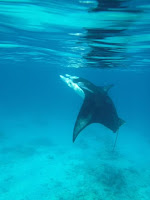 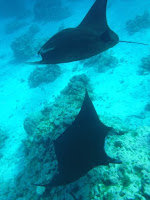 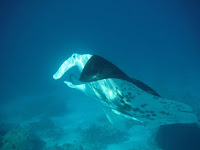 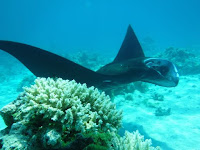 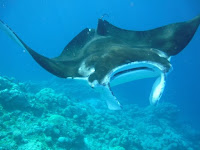 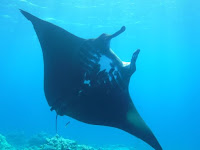 And don't forget the Manta Rays!
We visited them most days

Everyone took it easy for the next couple of days while it rained off and on. We went to the beach to forage for coconuts and stopped occasionally at other boats to say hi. No one seemed up for an all-boat get together, fearing the clear skies between showers wouldn’t hold. We were able to catch enough water for a big laundry day at the end. It had been piling up for a while and it was good to get the big job out of the way.

The weather afterward was clear and calm. We took the opportunity to take the Pudgy a couple of miles into the lagoon to snorkel on a couple of reefs marked on the chart. I was excited about getting to see some stuff away from the vicinity of the anchorage, where we knew it was likely no one has been for years. I was hoping for lots of big fish and pristine coral, but all we ended up finding was two big mounds of gravel rising from the black depths and topped with only sparse life. Well, now we know for next time. The snorkeling near the anchorage is much better.

After going home and changing, we went over to Nauta d, to whom we had shown the mantas the day after they arrived, and spent some time with them. We had been invited for drinks, but were offered a few “snacks” as well. They kept handing us bowl after bowl of delicious ceviche and gazpacho, prepared by Uxoa, their Spanish (Catalan) crew. Our snacks took care of dinner for us and then some.

While we ate and rolled our eyes back in their sockets with pleasure, they told us about their journey from their home port in Germany. It was fascinating. Of all of the European boats that we have met, they surely have set the record for fastest trip to Suwarrow. Instead of the usual one to three years, they had done the trip in four months. How? They did it by sticking as closely as they could to the great circle route from the Baltic. They sailed to Greenland, up the Davis Strait to the Arctic Ocean, and crossed over Canada to the Bering Strait. The season up there was coming to a quick close, so they high-tailed it to Hawaii, made a brief stop and got out of there before Hurricane season got too established. After a quick stop in the Gilbert Islands, near the equator, they arrived at Suwarrow, where they could slow down and join the part of the crowd heading for Australia. Their route was less than half of the distance of going around Cape Horn and about two-thirds that of the route through the Panama Canal. 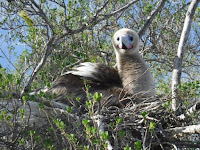 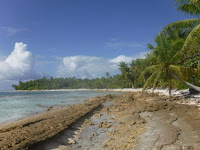 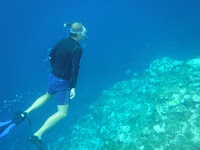 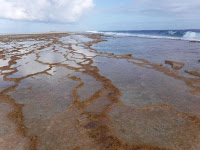 Plenty of exploring - ashore and underwater
Boobies were still nesting

That wasn’t why they did it. They did it for the adventure of transiting the Northwest Passage. Their photos were amazing! The giant bergs with their million shades of blue and white and the crystal clear air reminded us of Antarctica and had us sighing with nostalgia for the opposite side of the globe. Instead of penguins, though, they saw Walrus, Narwhal and Polar Bears. Uxoa got a particularly good photo of a mother and her two fluffy cubs sitting on a floe and we were transfixed by masthead video she took of Nauta d crunching through patches of slushy ice. It was nice to experience the trip vicariously through them. Ice and catamarans don’t go well together.

A few boats left. A few others arrived. One Canadian boat brought a music teacher, Lisa, her family and a handful of instruments. We met them when we went ashore the next morning to clear out for the day after. They and a few others were making noises about sundowners on the beach later. We had to decline because we would be leaving early and our dinghy would be trussed up in lifeboat mode. They solved that problem by offering to come over and pick us up on their way to the beach.

After her daughter Robin dropped us off at the beach, she went back to their boat to collect her parents. Lisa brought her guitar ashore that night, sang a few songs with Robin as backup and handed the instrument over to Ranger John. Man, John can play! He has an enormous repertoire of traditional and modern songs in his head, which he seems to be able to play by ear. While going through a section of tunes by The Eagles, he even did an impressive job of duplicating Eric Clapton’s more difficult riffs.

Ranger Harry showed up with the guitar he and John usually have to share and joined in, playing harmony. Being able to play at the same time is a rare treat and the moonlight streaming through a gap in the palm fronds revealed a big smile on Harry’s face. He also plays beautifully. He has an incredible voice and when he finished the evening plucking out and singing a Polynesian song about the sea, we all got a little choked up and only narrowly avoided a group hug. I’m sure there wasn’t a single person on that beach at that moment who would have wanted to be anywhere else that night. For us, it was the perfect last evening for us on Suwarrow.