[Kyle]We found a cheap car rental for a day (FAB rentals - $40TOT), and did a complete circuit of Tongatapu Island. We managed to see everything on our map of sights to see and still got the car back with dozens of seconds left until the rental company closed. The island is the perfect size for a day trip. 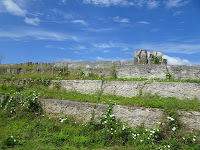 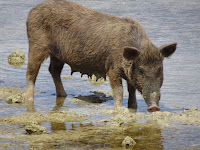 The ancient Terraced Tombs (near Lapaha),
and one of the Fishing Pigs (near Talafo'ou)

One of my favorite things was our cave swim. Maryanne was prescient enough to bring masks, snorkels and an underwater flashlight, so we had lots of fun among the stalagmites and ‘tites. Unfortunately ALL of our underwater cameras are playing up so if you want to see what we saw, you have to come to Tonga. You’ll love it. The people are all really nice. 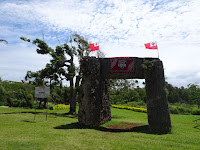 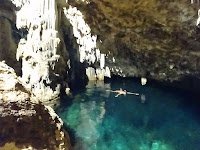 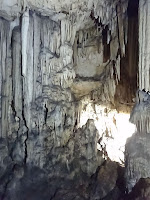 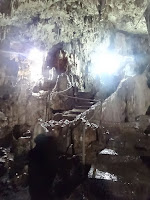 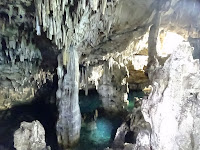 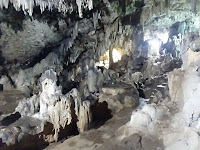 After a quick tour of the Ha'amonga Trilithon,
we spent an hour exploring and swimming in Anahulu Cave (A rare fresh water swim!) 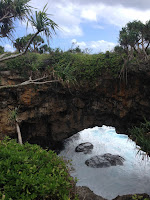 Hafangalupe Natural Land bridge (a cave roof collapsed), and the spectacular nearby Lookout

Also, they have a whole section of coast that is blowholes and crazy crashing surf as far as the eye can see. We have a couple of pictures that look like big waterfalls, but they’re just the spray running down the rocks after a big wave. 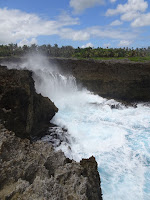 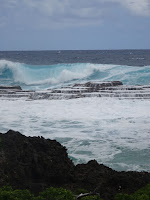 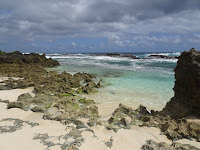 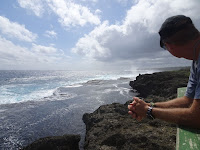 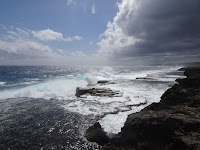 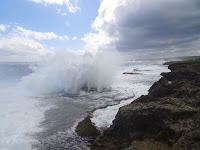 We stopped at several of the sites along the coast where blowholes were visible - our favorite was the "Whistle of the Noble" (Mapu a Vaea) Blowholes (Houma, Tongatapu, Tonga) 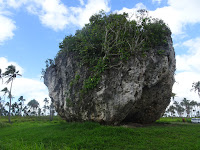 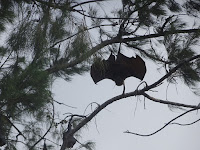 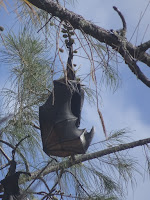 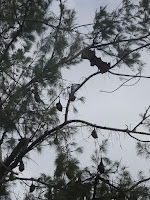 Tsunami Rock is the largest tsunami displaced boulder in the world (see the car to the bottom right) - when that landed was not a good day to be exploring the coast!
Then we went to visit the Flying Foxes (fruit bats) on the island - apparently they are all the property of the King!

As if all of the scenery weren’t entertainment enough, the WHOLE island was decked out in decorations. Tonga and Australia were scheduled to play their first rugby league match and the whole island was covered in the Tongan colors of red and white. It was like Christmas, with almost every house, business and vehicle trying to outdo the rest. 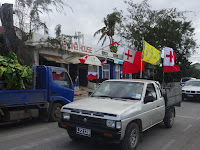 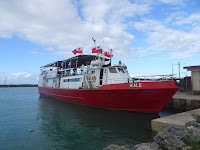 It seemed the whole of Tonga were looking forward to the Rugby League match: Tonga v. Australia

We watched the match at Big Mama’s on Pangaimotu Island. It was a good game, although Tonga fell behind right at the beginning and despite playing a really good second half, were never able to close the gap. Most of the Tongans didn’t care. The overwhelming sentiment amongst them was that they were proud of their team for being good enough to play a team at Australia’s level. They are the most gracious losers I’ve ever seen. Everyone was still all smiles the next day.

For us, what was even more entertaining than the big game was the crowd at Big Mama’s, particularly one happy Tongan woman who is our own one woman stadium. She giggled and cheered the whole way through at full volume. That woman has got some lungs on her! She was cheering for Australia. I think it was to wind up her friends, the Tonga fans. Every time Tonga scored, though, she switched sides like a snitch in a gangster movie and started waving her Tonga flags and yelling “Yeeeee-Hooooo!!!” Everyone left with big smiles and ears ringing like they’d been to a rock concert.

Tongan flags were still everywhere we went into Nuku’alofa to clear out. As for the weather, the region has been experiencing a meteorological phenomenon known as “reinforced trades”. It’s been blowing like Hell for days now. You can go any direction you want as long as it is west. We’re going southwest. Close enough.