Snorkelling the outer Islands in Vava'u

[Kyle]We skipped out of Neiafu a day before the festival officially ended. I’m sure we would have had a good time, but the time to move further south was fast approaching and we wanted to be able to enjoy a few days anchored out in some of the Vava’u islands before doing the longer passages between the island groups.

We stopped first at Nuku Island, where we had enjoyed brilliant snorkeling the year before. When we came around the corner, we saw one other boat anchored there. It was Green Duck, Ludger’s boat. We searched and searched for a good spot to anchor that would preserve both of our privacy, but in the end, we ended up anchoring practically on top of them. He and his crew, Christiana, insisted they didn’t mind. They were leaving the next morning at first light and we would have Nuku to ourselves. They invited us over for sundowners and we didn’t even get to demonstrate our fixed Torqeedo. Ten pulls on the oars and we were there.

Christiana is heading back to work in a week from Fiji and was already dreading the adjustment from tropical cruising. We spent a lot of time talking about the German cruising grounds in the Baltic. They have a section that looks like the Outer Banks of North Carolina, except with castles. 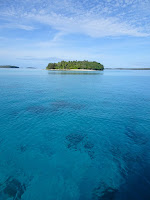 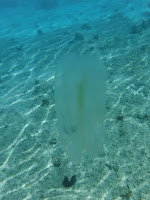 We're back at the beautiful Island of Nuku (but so are various Jellies!

After Green Duck left for Fiji the next morning, Maryanne and I went for a long snorkel. We found most of the cool stuff we had seen there before, plus a couple of other cool things. We found a little angler fish that was too shy to be photographed. While we were enjoying a bunch of clown fish nervously backing into their anemone, we spotted a strange shape moving around in another anemone. It turned out to be a little shrimp. It was half clear and half a bunch of crazy colors and patterns. We had to stare at it a while or flush it onto the sand do discern its shrimpy shape.

As we continued around the island, we also started to notice a lot of plankton in the water near the surface. The layer got thicker and thicker and the little iridescent blobs grew larger and larger. It wasn’t long before we realized we had stumbled into a big bloom of jellies that was growing more populous by the minute. Then they started stinging. Maryanne asked me if I was being stung with the same calm she used to announce she was being electrocuted when she was using our old malfunctioning sewing machine. Yeah. They were getting my head and legs a lot. I was glad I was wearing a long-sleeved shirt to protect myself from the sun. Most of the stings were mild, like scraping past a thorn or getting a sudden patch of mild sunburn. Others were worse. I got one on my upper lip that felt like I had tried to kiss a light socket. That one stopped me cold. They did no lasting damage. Neither of us ended up with any welts or rashes. 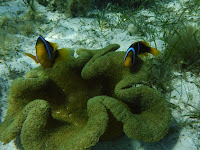 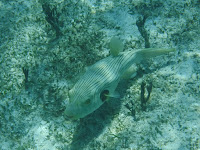 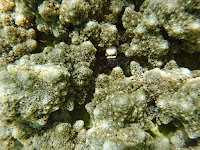 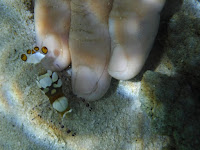 The Usual suspects found when snorkelling, but also (new to us) the Peacock Shrimp
Hiding in the anemone and then alongside Kyle's fingers 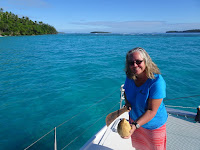 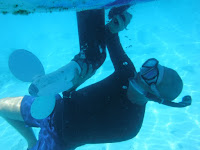 Some play, some work - normal life aboard

We headed back to Begonia, which was in the clear and found an adorable little family of cuttlefish trying to communicate with us in pictures. We decided to scrub off some of the bottom growth that had accumulated since the last time we mowed the lawn. They seemed to enjoy the free salad. I tried to make the shape for “Help yourselves, even if we’re not here.” I hope they got it.

Next, we tried to go to a place known as the coral gardens. It’s got coral right in the name, so we knew anchoring was going to be a challenge. When we showed up, we were pleased to find three government moorings set up to protect said coral. One was occupied and the owners were about, so we sidled up next to them to ask about the other two.

“They’re available, but they were too shallow for us. Have a good look around before you leave the boat unattended.”

We picked up the nearest one and then I went in to have a look. The lagoon side was deep enough, but the shore side looked marginal. I grabbed Begonia’s stern and used my fins to propel her around the swinging circle. Right at the end, I had to dig my fins into the bottom and push hard with my shoulder to keep a big coral head from contacting our starboard rudder.

We cast off the mooring and searched around for somewhere we could put our anchor. We couldn’t find any patches of sand big enough, so we headed around the corner to a place Maryanne had proposed as a backup on the way in.

It was great! We anchored in the gap between Vaka’eitu Island and Lanukungito’o Island. There’s a reef there connecting the two islands. Behind it, there’s a big shelf of deposited sand two to three meters down with no coral whatsoever. We watched our anchor kick up a cloud of it as it hit the bottom in the crystal clear water and then let out way more chain than we needed, just because we could. 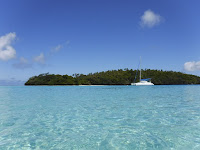 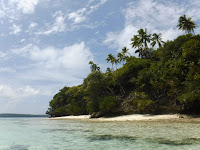 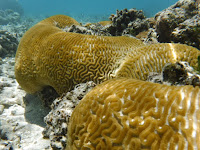 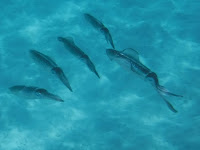 The view here is amazing! The shallow shelf of white sand makes Begonia look like she’s floating above a beach in a tropical sky. On each island on either side are perfect little deserted beaches, each surrounded with stunning rock features eroded into the uplifted coral by the millennia. Through the gap in each direction, we can see another twenty or so islands at various distances, some with a sailboat or two anchored nearby. Places like this seem to pretty to be real. 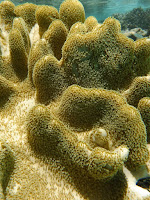 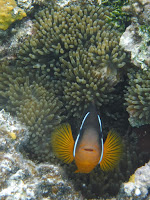 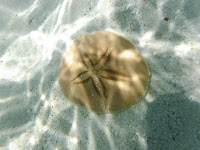 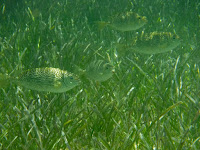 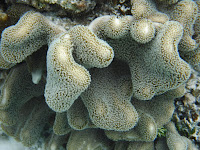 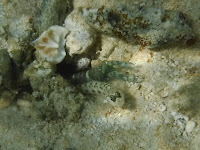 Enjoying the snorkelling, especially the little critters,
But take a look at that last picture (and the video) while the picture and video isn't great - you can just about make out the little fish (a Goby) and the shrimp that share a burrow and are found all over the place here

We went for a swim and found plenty of coral at the barrier to entertain us for hours. Maryanne had the find of the day when she spotted a Lion Fish. Those are not to be touched. We made a point of putting the only footprints on our favorite beach. We returned to the boat only when we knew we were getting too much direct sunlight. When we got there, we found another family of cuttlefish. These individuals were three times the size of the ones in Nuku. Oh, if we hadn’t just cleaned the hulls…

We spent the remainder of our time sitting in the cockpit and sighing at the view every third breath or so. Every now and then, we hear a “Pfft!” and spot a big sea turtle surfacing nearby.

We couldn’t bear to leave just yet, so we decided we needed an extra day here, just to appreciate it fully.

After a glorious couple of days at Langito’o, we moved a few miles west to an anchorage at the western extreme of the Vava’u group known as the Blue Lagoon. We were looking forward to this as one of our guides calls it one of the prettiest spots in Tonga. The Moorings charter company classifies it as a “Don’t Miss”.

Okay. I think Blue Lagoon was named in the same spirit as Greenland. If you can get people to come, your restaurant will always have a little business. Hey, we fell for it. 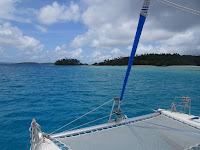 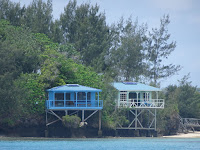 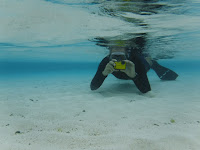 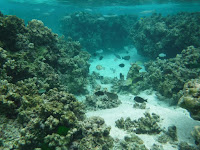 There are a couple of lovely beaches and resorts on either side that have pastel-colored cabanas on stilts tucked into the trees. Although we were the first to anchor in the lagoon, since this place is on everybody’s list, it quickly filled up. By the time we actually got our fins on and got into the water, we had to dodge dinghies and kayaks from the other boats.

We were really disappointed with the snorkeling. We spent ages hoping to find something good. The Blue lagoon has LOTS of coral, but at least 99% of it is dead and covered in silt and algae. This place would have been an incredible thing to see when all of the coral was alive and brightly colored. Lots of fish remain, though, and we did see one sea turtle napping on the bottom. He took off when he spotted us.

In the middle of the longest stretch of beach, the view is marred by a “No Littering” sign posted in front of a cave. Closer examination of the cave revealed it to be cluttered with half burned detritus from the beach bonfires of some very inconsiderate people. By the looks of the rubbish, it seems to not be locals, but spoiled boaters who are expecting the locals to be their maid service once they’ve gone. Shame on them!

All of the other boats left mid afternoon to go elsewhere. Charter boats trying to tick off all of the anchorages have to go to two or three a day. Had we not been tired from our long snorkel and averse to the idea of undoing all of the work we had done that morning to get there, we would have gone the five miles back to the picture perfect anchorage at Langito’o. We were making the big jump to Ha’apai in another day, so we decided to stay put and rest up for the overnight sail.