[Kyle]Since Summer has officially begun in the southern hemisphere, there was no chance we would be getting blankets of snow for Christmas. We still did get a very wet, windy and white (with fog) Christmas. 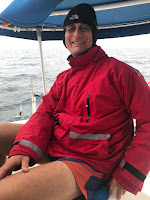 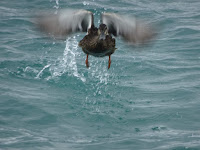 A cold sail over to Huruhi, but the duck followed us much of the way
(for the gift of a little bread once in a while)

Since the forecast was not looking good, we got up early and made the long sail to Huruhi Bay, on the southwest corner of Waiheke Island, just a few miles from Auckland. It was nice to be making a trip that was far enough to warrant setting sail, but the whole day was a cold, rainy, upwind slog. The water was flat enough that going upwind was not uncomfortable. Tacking would have been a nice way to see the bay, but most of the time we were flying in the clouds, so to speak. When we set the anchor in Huruhi, we were cold and tired and it had been a long day. We were looking forward to a warm meal and a movie.

my back was not doing so well, so we planned to make the next couple of days easy ones. It rained sideways and the wind howled through the rigging the whole time, so even If I had been feeling better, it didn’t seem too appealing to go out anyway.

On Christmas, we woke up to bright blue skies. Maryanne managed to get a picture of me standing somewhat straight on the trampoline with the hills and the town of Surfdale in the background before the storm returned and pinned us down again for the rest if the day. 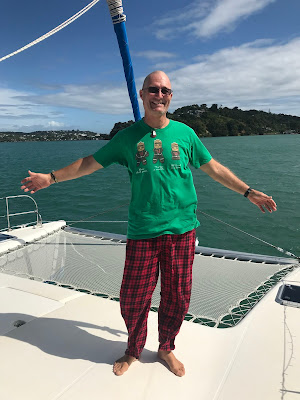 In the middle of the night, the wind shifted from blowing out of the bay to blowing in and things got a lot less comfortable. We decided to bail out and try to find some shelter from the increasing waves. We found a spot in the lee of Motuihe Island, along with a dozen or so other boats. It was only a couple of miles away, but each was hard won. By the time we set anchor, I was soaked and shivering from having been continuously drenched in flying spray. Our nice, clean boat was now covered in salt crystals and the interior was a shambles of things that got thrown around. So much for an easy trip to the end of the road…