[Kyle]Continuing along the coast of the North Island, we made our next stop at Motukawanui Island in the Cavalli group. It was a little further than we had been going lately, which has mostly been barely far enough to warm up the engines before we’re there already. This time, we shut ‘em down and got to do some actual sailing. We had medium-ish headwinds, so the tacking helped to double our time on the water to three hours.

We anchored at Wai’iti Bay (called Waiiti Bay for short) on the southwestern side. We were the only boat there.

We looked at the forecast and decided today looked better than tomorrow, so we blew the kayak back up and headed for the beach. We had spotted the DOC trailhead sign when anchoring and just had to see where it went. Just as we started climbing up from the beach, a small local fishing boat arrived and anchored and started unloading for what looked like a night at the hidden DOC hut in the trees. 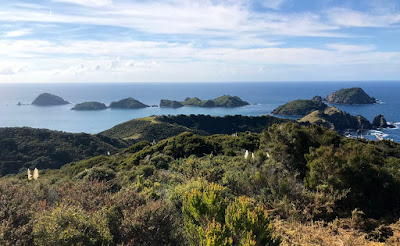 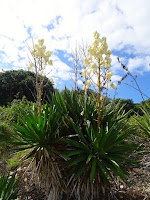 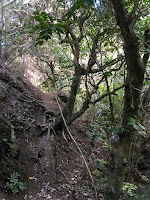 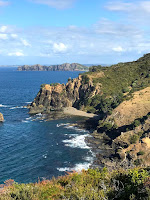 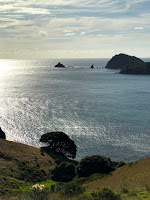 Our trail traversed the length of the island as well as taking a spur to the highest point for a view. It was well maintained and started off moderately enough, but then began to arc into ever increasing steepness that had us both panting like steam engines. I thought the sign at the trailhead said this was supposed to be classified as “Easy”. It then descended into and out of a couple of steep valleys before steeply descending to the beach on the other side of the island. By the time we made it to the water, we must have climbed and descended three times the island’s maximum height. It was pretty, though. Unlike a lot of heavily wooded trails, the trail on Motukawanui spends the bulk of its distance meandering along high ridges, with sweeping views of the valleys and the sea below. After the double dose of a round trip, we were pretty worn out from three and a half hours of hill walking.

Trails with an average angle less than 10° are considered the same as sitting in your car and as such do not qualify to be classified as trails, regardless of length.

The good news is we completed all of the trails on the island in only 210 minutes, versus the 215 we got by totaling up all of the estimates on the trail signs. That means we’re 2% fitter than the geezer they used to calibrate them. {Maryanne: At least this is what we're telling ourselves!}

Anyway, It’s a great trail that provides brilliant views along with a respectable amount of vigorous exercise in fresh, clean air. We recommend it highly. 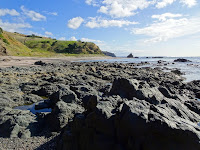 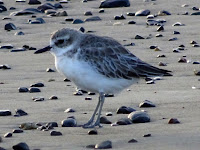 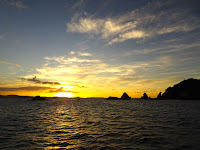 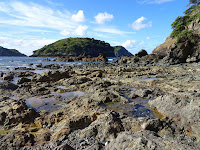 Back on our side of the island, we stopped at the DOC hut to say hi to the people from the fishing boat. It was a couple from just down the road in Kerikeri. He came to the island several times a year in the boat he called his “little tinnie” and had decided to finally show it to his “new” girlfriend of nine months. He was a fount of information, like a friendly amateur ranger, and told us all about the history of the island and the current conservation efforts as a kiwi habitat. He said they had finally reached the happy milestone where they actually had to start taking them off of Motukawanui to keep the population from depleting the island’s resources. They were also exchanging unpaired kiwis with other populations to try to keep the gene pool as diverse as possible.

Night was about to fall, so we bid them farewell and paddled back to Begonia. We made it just before an evening of rain gave everything a good rinse.