[Kyle]We left Matai Bay at first light for the trip to Rere Bay in Whangaroa Harbor. Mostly the trip was so calm and flat that we could hardly tell we were moving but for the slowly passing scenery. 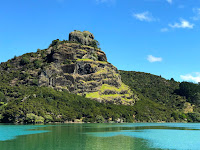 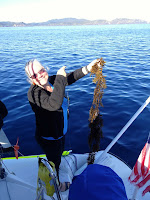 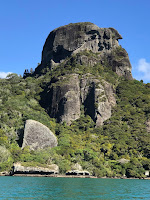 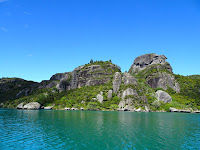 On passage we only caught seaweed, but the scenery on arrival soon had us forgetting about any poor fishing luck

Whangaroa has a narrow entrance that can’t be made out until quite close in. Once through it, though, a world of beautiful scenery appears. Mountains of aggregate are eroded into amazing shapes. Cracks and ledges are filled with trees and ferns.

We arrived early enough that we decided we just had to blow up the kayak and paddle around. Near Rere Bay is a river which can be accessed by dinghy or kayak at high tide. The tide was high, but going down, so we started with that. It was incredible! Every time we came around another new bend, a whole new scene of rock and green opened up. In the shallows, we got to watch herons wade in the mangroves with a background of steep mountains. Maryanne was so amazed that she gushed more than usual about it all. She was constantly saying, “It’s so nice! It’s so nice!”

Kayaking about - Mangroves and Mountains

It was a lovely warm day and it was so nice to be out on the water. After a summer of sailing, it felt like we finally got to enjoy the scenery of Fiordland or Stewart Island without having to suffer through any cold or any bugs.

By the time we had traced the perimeter of our arm of the harbor, we still weren’t ready to go inside, so we landed the kayak at the nearby Love Cove DOC hut and had a chat with the couple who had kayaked there from town (Whangaroa) a couple of days before. We also got to meet their resident pig, who I named Lunchmeat.

From the hut, there is a trail running along the river we had kayaked earlier. Maryanne and I were thinking about walking as much of it as we had time for. The couple in the hut talked us out of it and told us our time would be much better spent on the shorter, but more strenuous trail to the viewpoint at Duke’s Nose.

That is one crazy trail! It starts steep and stays that way until the end, when it gets a lot steeper. When I say a lot, I mean there are (short) parts that are vertical. To help with this, the DOC installed chains to hold onto. Then they must have decided that wasn’t sufficient, so they replaced it with a big, steel handrail like the kind used to make chain-link fences.

I just love the DOC. Somebody took a bunch of long, heavy sections of steel pipe up that hill, drilled holes in the rock, epoxied rebar into the holes and then bent the whole thing into place on site, just to make it safer and easier to get to the view above.

Now, as long as you’re not someone who is squeamish about heights, you can get to the top of Duke’s Nose with only about twice the difficulty of climbing a ladder, which isn’t really that hard. Granted, we did it on a nice dry day. It would be pretty scary in the rain.

At the top, the view is beyond words. Let me try some: Wow! Nope. It’s better than that, even though both of us were saying it all of the time. The tree-filled canyons and the blue water below just made our hearts ache. We are so glad we live in the post-film camera era. Even so, photos don’t do it justice. 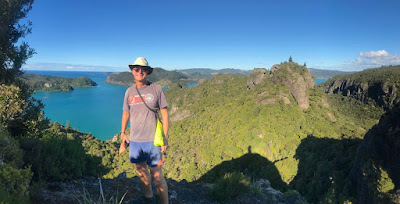 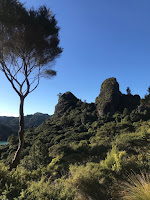 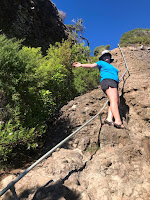 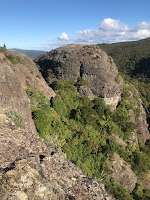 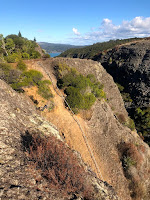 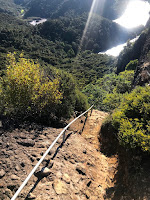 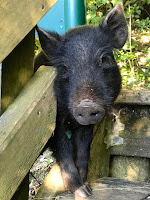 That ended our day on a high note. All that was left was to get back down. Perhaps I’ll even wait until tomorrow to find something onboard that needs fixing…

It rained all day the next day. It was nice to have a “day off”. We didn’t, of course. I found a couple of minor things to fix, but nothing that was too hard or took too long. I wrote a bit and Maryanne started a deep dive into the morass of clearance regulations and procedures for our next season. Each thing she learned revealed two others that needed worrying about. Next thing you know, the day was over and she was feeling more overwhelmed by it all than when she started.