[Kyle]At first light, we slipped our lines from the commercial dock and headed north out of the Exmouth Gulf. We rounded Vlamingh Head and after an hour or so of upwind tacking, pulled into a break in the Ningaloo Reef at Tantabiddi. 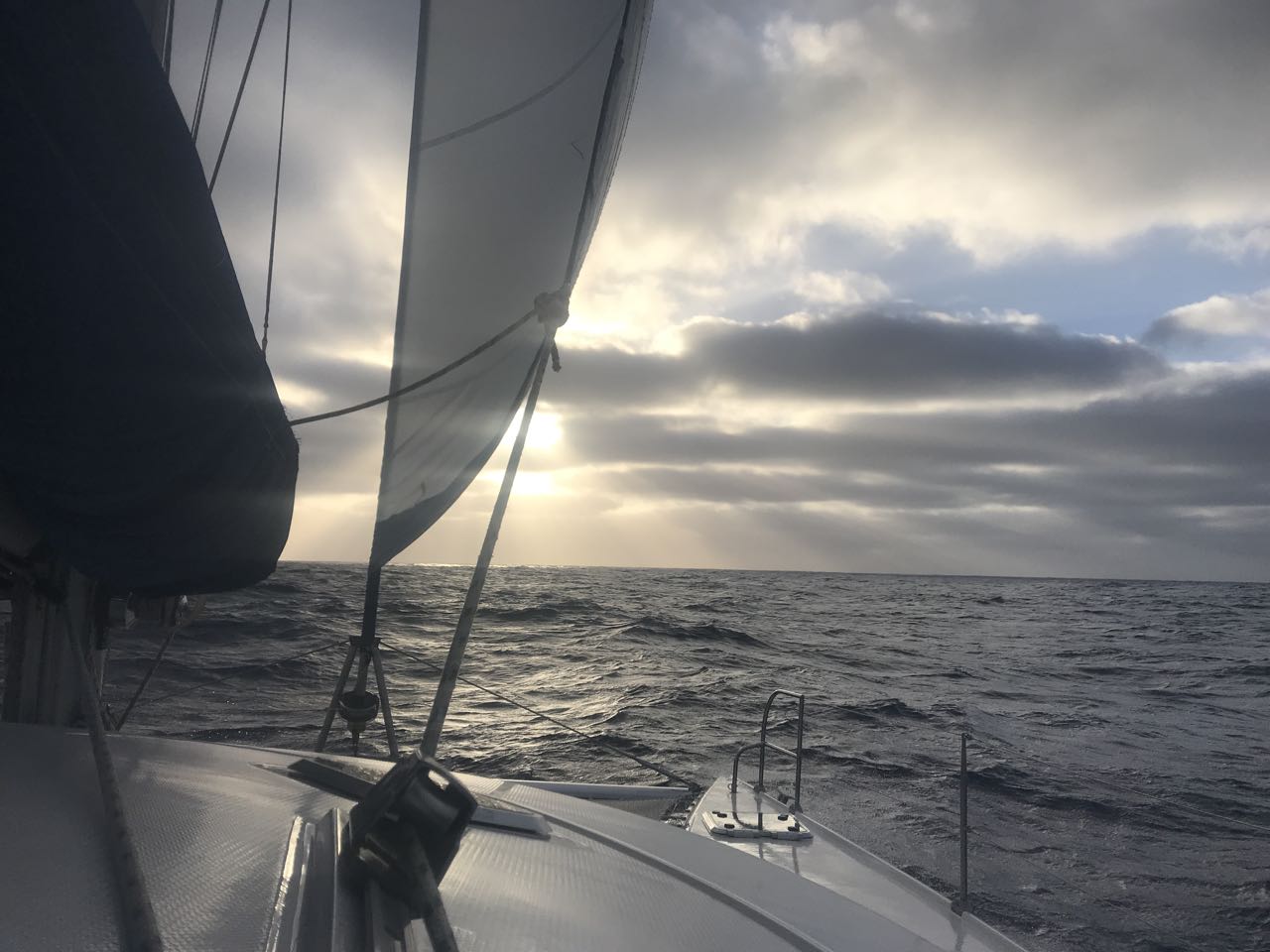 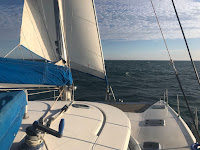 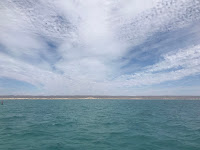 I was pretty tired from the repeated days of early wake-ups and was more than happy to just watch the waves go by, to be swinging on a mooring and not at the marina in Exmouth. Maryanne wasn't having any of it. The Ningaloo Reef is vast and very important, biologically. The water would likely be too cold for swimming soon, since we were heading south, so there was no way she was going to miss out on a last chance at a snorkel while we were here. Other than for bottom paint cleaning, we haven't had a recreational snorkel for months. We had been in croc country. Now we were too far south for them, but still far enough north to be in coral. We had to go! Plus, it was hot, and what better way to cool down than that.

The very first thing we noticed was that the water was a little on the chilly side. It would be alright for an hour or two, but not for going out the whole rest of the day. The next thing we noticed was that the current was pretty strong. We could overcome it, but it was probably going two-thirds as fast as we were. Fortunately, the buoyed-off protection zone was in front of Begonia, upstream.

We swam pretty hard and continuously for over an hour to get to the far end of the zone. Once we had made it, we finally let ourselves stop and drift. There was some interesting stuff to be seen. The coral was about 50% healthy, with lots of big schools of fish in selected spots. The visibility wasn't great, so the next thing to appear out of the murk was always a bit of a surprise. When we spotted something good, like a turtle, or an especially colorful school of fish, we would turn around and swim hard to stay in place for a while.

With much less effort and in about a third of the time, we had steered ourselves just upstream of Begonia. The current took us under the bridgedeck, where our outstretched hands caught the streaming swim ladder. Well, that was refreshing. 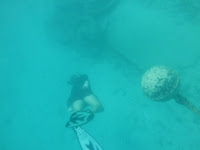 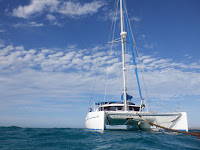 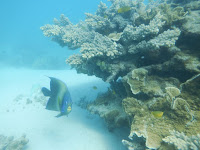 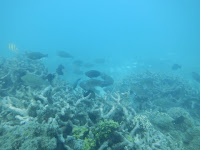 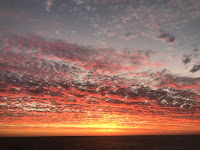 We found time for a swim on the mooring,
a snorkel on the reef,
and back to the boat to enjoy sunset

When I got up the next morning, it was still dark. I tried to console myself that I had basically slept in compared to getting up at midnight. I would have liked to stay a day more to rest up, but a Tropical Storm was curving towards the coast north of Exmouth. Exmouth was not forecast to get much wind, just a lot of rain, but the weather system was causing a rare break in the normal strong headwinds going down the coast. If we left now, we would be able to save ourselves a day or two of bashing,

And so it was. We started our first day in winds too light to feel. After a few hours, on my first day watch, we were able to un-box our new spinnaker and really eat up the miles (our last new one had a slight cosmetic flaw, so the sail maker had sent us a new new one in Exmouth to replace it). Our speed lessened the effect of the hot breeze that was coming from even closer to the equator than us, making both day and night very hot.

Once we were just north of Shark Bay, Our north wind ran out and the headwinds returned, heralded by a wall of low clouds. The spinnaker was stowed for the duration and within a few minutes, we were down to double-reefed main and jib and were turning away from the direct course to keep them both filled. The tacking had begun.

The new wind was from the south, where it is colder. We were also sailing into it, which made it stronger. Gone were the cool breezes. An icy wind was here. The quilt came out for the bed and we both started bundling up in foul weather gear for our watches.

After our last tack up Shark Bay, we passed the northern tip of Dirk Hartog Island. The name comes from the first European, a Dutchman, known to set foot on Australian soil in 1616. In the manner of the day, he left a plaque behind that effectively said, “I found this. It's ours now.”

We stayed on that tack for most of the day. We needed to get a little farther offshore to get to the edge of the continental shelf, where the Leeuwin Current was streaming southward. Once we got there, we would tack every hour and a half or so to stay near its center. It didn't give us much of a speed increase, but greatly reduced our tacking angles, which made each of the stitches we were tracing on the map that much bigger. We did this for a couple of days before the current angled in toward the continent near the Abrolhos Islands. That was a fast tack. Then the current sped up and curved due south again, so we repeated our tack every hour or two procedure.

We had both really wanted to stop for a while in the Abrolhos. Sailing to Exmouth, we had read the story of the Batavia shipwreck there in 1629 and were eager to see some of the places where the drama had played out. Unfortunately, our period of 'mild' headwinds was supposed to be running out soon, so if we didn't keep moving, we could be stuck there for weeks.

The Batavia story is harrowing. A mutiny had been in the making when the ship ran aground, giving all concerned more important things to worry about. After a source of fresh water could not be found, Captain Pelsaert and a small crew sailed for the Australian mainland in one of the open boats, looking for water. After trying different places for hundreds of miles, they gave up and decided to continue almost a thousand more miles to Batavia, the ship's namesake, to arrange a rescue.

Almost as soon as the Captain's boat was out of sight, one of the mutineers, Jeronimus Cornelisz, seized power and then proceeded to systematically murder all but a small group of his henchmen. Hundreds were butchered in front of their families or were drowned by being driven off of the island, which had no cover in which to hide. One party that had been effectively sent off to die of thirst actually managed to find a reliable source of water. They regained their strength in secret. When the rescue party arrived with Captain Pelsaert months later, they were first to intercept the ship by only minutes. It was enough time to tell what had happened and warn them about Cornelisz's plot to steal their ship and murder the crew. The ambush failed and all of the murderers were brought to justice with seventeenth century swiftness.

The Batavia ran aground because the islands are so low that the man on watch could not tell if he was seeing a patch of moonlight or a reef. We were never less than five miles away, so to us, it just looked like more ocean over there. 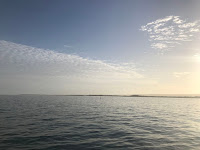 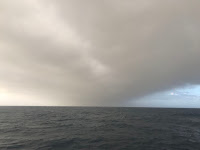 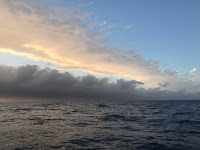 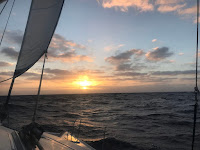 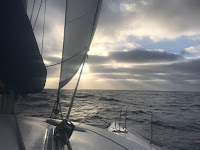 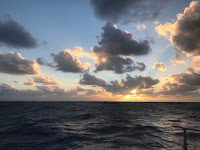 The sail south was COLD with winds from Antarctica reaching us; all producing some interesting clouds along the way.

Once we were past the Abrolhos group, the wind shifted just enough to allow us to stay on the same tack for the next two days, while we eased in toward the coast. Another frontal system was approaching and it looked like we would get to Perth about the same time it would. We decided to go in at night instead of waiting until daylight.

We got tied up to our assigned dock at the Fremantle Sailing Club just after midnight at the very beginning of what would have been Day Eight. About two hours later, the wind arrived. It blew hard and it blew cold. We went to bed very glad that we weren't out in it. The good weather was on its way.