[Kyle]Christmas morning at the Fremantle Sailing Club was a picture of tranquility. As far as I could tell, Maryanne and I were the only ones up and about at the normally busy marina. The water was flat, too. We untied, gave Begonia a gentle push and bid farewell to Freo. 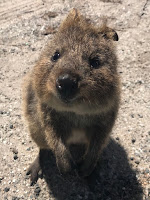 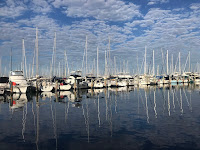 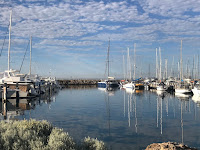 Once we were out of the marina, the wind gradually filled in from the south. We took it easy and sailed under just the jib to Rottnest. My back was kinda playing up and I wasn't up to hoisting the main for such a short trip.

We bypassed Thomson Bay, which was chock-a-block full of moored boats packed together like cars at a drive-in theater. Next was Geordie Bay, which was even more densely packed. No room for us. Finally, we came to Parakeet Bay, which only hosted half a dozen boats. Parakeet's saving grace is that the bottom is a patchwork of half sand, half thick grass. The sand is good holding, but the grass is definitely not. This keeps the long-term boats somewhat spaced out, although still a bit close. 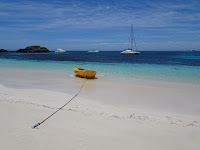 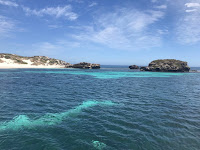 In between, on the grassy patches, are the short-termers. These are mostly runabouts and flashy cabin cruisers who select their spot for proximity to the beach or because it looks like a good spot to fish. They'll show up, drop their anchor until it disappears into the grass and then throw out another ten feet of rope (it's always just rope with them) for good measure. Then they will start whipping out the fishing poles or the inflatable toys or whatever. After a few minutes, someone aboard (usually a kid alternating beers with juice boxes) notices they are dragging. Then someone rushes to the helm, starts the engine and pushes the button to retrieve the anchor. It emerges as a ball of weed. Then they move a bit and drop the whole ball at a new spot, still clearly in the weeds. After the third or fourth try and a few close calls with other boats, they usually give up and head somewhere else, trailing a big string of weed. This is exactly as Liz had said it would be. Also like she said it would be: few boats stayed for the night. The ones that remained were well spaced behind their individual sand patches. She was wrong about the naked woman thing, though. I'm still at the normal amount.

We had expected the density of anchored boats, particularly the not-so-good-at-it crowd, to go from high to crazy as the holiday progressed. A big (30-45kt) blow was in the forecast for Boxing Day, which we think not only kept people away that day, but sent them scurrying back to Perth on Christmas afternoon. Still, quarters were a bit close to feel it was really safe to leave the boat unattended. That was fine. My back was probably not up for a walking lap of the island.

Maryanne had not even had a chance to make her disappointed face when I informed her of my plan to give her the best Christmas present ever: a day without me bothering her! I knew she would not want to miss the island, so I insisted she go while I watch Begonia. She was surprised, but took the offer and was quickly rowing ashore to spend Christmas walking the roads of Rottnest like a lonely bag lady.

I think she had a good time. The island has lots of beautiful beaches and the clouds from the approaching blow made for some stunning photographs.

In no time at all, while I was watching the Parakeet Bay drag race, she texted me pictures of her first quokka. Rottnest was named after them by William de Vlaming, who mistook them for rats, and so named the island 'Rat's Nest' in Dutch. This was clearly in the days before corrective lenses were available to the aged, which was anybody over twenty-five in 1696. Quokka's are not rats, but are instead tiny little wallabies, which are small kangaroos. Therefore qoukkas are Australia's tiny, cute, friendly little chipmunk-cheeked 'roos.

Maryanne had been really wanting to see one. She needn't have worried. Rottnest is a protected zone for them, with over ten thousand on the island. They are well accustomed to humans and are more than patient enough to wait for you to get your camera out and set up the perfect shot before joining you on your walkabout. Maryanne's quokka practically climbed into her lap like a cat looking for a cuddle. I'll let her expand if she wants, but she arrived home looking happy with her day while simultaneously saying things like, “It wasn't the same without you”, etc. Well, of course it wasn't! She got through the whole day without having to do first aid on me OR having me eat half of her ice cream before she even got to see what it tastes like. It must have been just miserable for her.

Maryanne: Oh boy, we had a such a short time at Rottnest, and I really wanted to get ashore; I was crushed when Kyle revealed his back just wasn't up to it, but he nudged and encoraged me that it was OK to leave him alone on Christmas Day. So off I went. I walked along the various trails between Parakeet Bay and "The Settlement" in Thomson Bay. The island is really idyllic, covered in sand dunes (think Nantucket). No private vechicles are allowed (there are just a couple of busses and an ambulance), so most people invest in a bicycle to get around. Aside from the roads, there are miles of trails that criss-cross the island. Like all things Australian, Rottnest is abbreviated to "Rotto" by the modern-day locals, but its native name is Wadjemup meaning "place across the water where the spirits are". While its population is just in the low 300s on busy tourist days (like Christmas) there can be 15,000 people ashore. Most come for the day on the ferry, but there is a hotel and a host of self-catered accomodations and camp sites (even glamping) avaiable.

Aside from the snakes, I was also looking out for the native quokka since it seems every visitor is pretty much guaranteed to get a quokka picture if they want to. It took me a few miles of hiking (apparently the tame ones favor the town), but YES - I did get to see a few of them too (I was so excited).

Once I reached the settlement, I had planned a slightly different route back to the boat (via the ponds), but I was starting to feel guilty about leaving Kyle alone. Amazingly the bus was running on Christmas Day, and I grabbed the option to take the bus back; this would not only get me home sooner, but with the added benefit that it would first drive me around all the remainder and greater part of the island. From the commentary I learned that the train and a host of other tourist stuff is currenly closed (for upgrades and maintenance) - so I figured that would help Kyle feel a little better that he hadn't made it (mabye?). 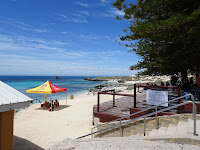 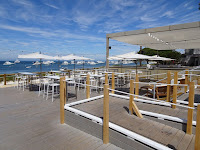 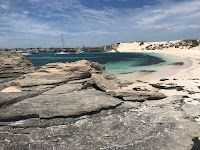 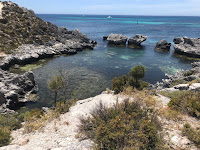 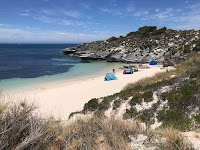 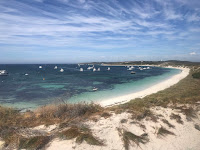 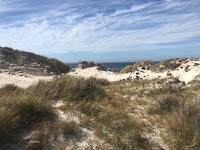 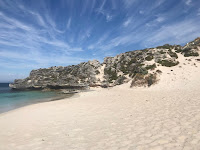 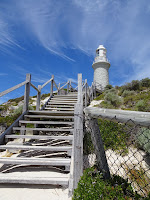 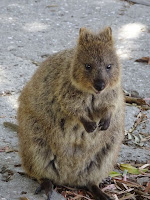 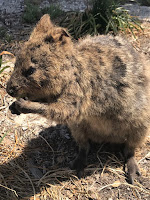 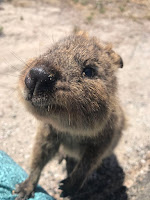 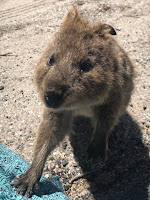 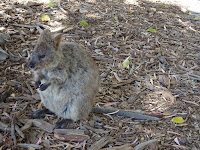 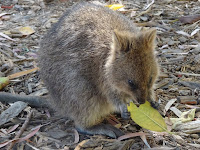 Rotto, its beaches, and its quokka 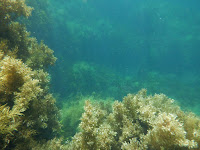 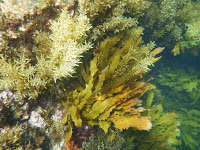 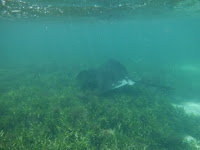 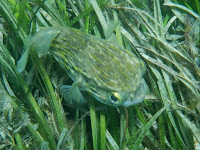 It was a bit chilly, but I managed a quick snorkel around the bay too
Posted by SV-Footprint at 1:41:00 AM

Great update- so very glad you have your rigging sorted out. Sounds like a lovely time- even if you're standing on your head contorted and sweaty. Best wishes for you both from the whole family!

Hello. We’ve not met but we left Albany aboard Taipan in 04. I’ve noticed you are travelling south on the west Coast of Oz. Please don’t miss Albany. Email me at svtaipan@hotmail.com and I can put you in touch with some sailors and fun things to do there. Cheers Kris n David https://svtaipan.blogspot.com