Side Trips (by plane) 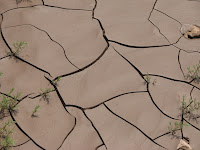 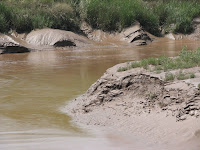 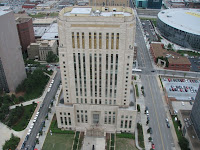 [Maryanne]Kyle's recent work trip involved an unusual amount of time off hanging out in hotel rooms - a full day in Moncton Canada, and an afternoon in Kansas City. Normally his work involves late nights and early starts (and little sleep) - so this trip was indeed a luxury. I agreed to join him. In a hotel room I always appreciate some time with a real bathroom and I can also get enough of a TV fix to be glad I don't have one on the boat.

Now I know that Moncton and Kansas City are not exactly tourist hot spots - but I was determined to try. Moncton was unexpectedly HOT (and humid) - but we did get out and I managed a river walk (Kyle ran, until he decided it was too hot, and then to turn around and catch up with me!). There are some pretty cool geological sites and is by the Bay of Fundy - famed for the largest tidal range in the world - but all the really cool sites were 30+miles away - so we confined ourself to the banks of Petitcodiac River for this trip - If I go again, we'll rent a car and explore further afield. The river itself is pretty interesting (mostly because of that huge tidal range, but also the rich chocolate color soil and water ) and has a dedicated foot/boardwalk for miles on the Moncton side of the river.

In Kansas City, we had just an afternoon, but I'd consulted my "Rough Guide to the USA" and was determined to do some thing - I decided a trip to the 30th floor observation deck of the City Hall would keep me happy. While Kyle took a nap, I walked the few blocks from the hotel to the City Hall; they are filled with Art Deco style buildings and fountained court yards, but also with bus terminals, bail bond stores, etc... an odd mix. When I arrived at the City Hall, I had assumed I could just hop on an elevator and take a look around the deck - nope! The place is off limits without a guard escort - so an hour later I had a personal tour of the observation deck and the views of Missouri and Kansas - pretty cool. I was told to take as long as I wanted, the weather was sunny and the sky clear - a perfect day for viewing. There is no printed guide so I relied on the guide, Linda, and her knowledge to point out the interesting sites (not too many, but still cool). There are also nesting Peregrine Falcons on top of the building. I didn't see the birds - but did see remains of their dinner.

So - now we are headed back to the boat for a weekend of exploring the Boston Area. If I can be a tourist in Moncton and Kansas City - I will have no problem in Boston.
Posted by SV-Footprint at 9:14:00 AM

You are amazing--being able to sightsee in Kansas! I'm impressed with you once again.