NOT a Fan of the Irish Sea 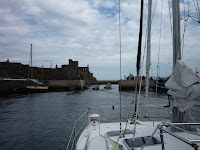 Leaving Peel and the Isle of Man
[Kyle]The morning we left Peel, it was gorgeous. The sky was clear, it was nice and warm and there was hardly a breath of wind.

At high tide, we left the harbor with half a dozen other boats. We all rounded the break wall, hoisted sail, and headed off on our diverging courses. We headed north for our rounding of the island. A light breeze had filled in and we were chugging along in flat water under main and screacher close enough to shore to sight-see. I was a lovely day, just perfect for sailing.

That lasted about four hours. The very minute that Maryanne went off watch to get a nap, the wind reversed, bending our course 90° directly toward shore. I tacked and found the strong unfavorable current was keeping us from making any sort of forward progress. Our track away from shore was exactly along our track toward shore. Further out, the strength of the current increased and we actually crossed our path going backwards. I was so sick of motoring from the trip to Peel that I just decided to wait it out until the current reversed. By the time Maryanne was back up, I was able to boast over two miles of progress since she had gone to bed four hours earlier.

Maryanne's watch was much more productive. The current was mostly favorable, and swept us past the northern tip of the island in a wind that had frustrated her by dying down to less than a knot by the time I was back up. We didn’t even have enough steerage way to point in the direction we were trying to go.

It was time for the foul current again. We got swept backwards for a couple of miles before a light wind started filling in. I was able to hold our own against it, and then gradually started making progress.

The wind strengthened and strengthened as it veered around to a direct headwind, bending our course due south toward the Welsh coast. Our forecast had called for headwinds of 8-10 knots for the last half of the trip. I wasn’t really looking forward to that, but upwind in 10 knots isn’t too bad as the seas are pretty mild.

As the Irish Sea started to empty on the falling tide, the current swept us back away from Wales and back toward the Isle of Man. The wind kept increasing until it was just over 20 knots, turning the shallow sea into a mess of closely spaced steep waves. Just the sort to instantly lose any forward momentum the boat does achieve. We would fall off the top of a wave and crash to a stop in the trough before the next. We did this tens of thousands of times. The poor boat seemed less a means of travel than a way to pick up water just like a bathing bird using its head to fling water on its back. Everything forward of the mast was regularly awash. The boat shook and reverberated as we slammed into waves that felt less like water than concrete blocks. It was abject misery; a state that soon encourages you to change tactics. {Maryanne} Normally in such conditions a slight change of course can make for a much more pleasant ride and often a just as quick arrival at the destination. With currents, wave and wind conditions this was not the case on this passage unfortunately, so we put up with it very unhappily. We picked the most comfortable sailing direction to also gain any progress at all, and we suffered. Better would have been to wait, or pull in somewhere and rest up - neither was an option for this trip (we left not expecting such conditions, and once we were in them, there were no suitable alternative harbours - so we just carried on)}.

[Kyle]With Footprint straining to make headway in the chop with all of the extra water weight on deck, we had no hope of making headway against the current. Maryanne came back on as the tide started coming back in, bringing us back toward land, but nowhere near where we were trying to go. The current running against the wind set up an even steeper sea. It was impossible to get more than a few minutes sleep on the off-watch. We would each fall into exhausted sleep after flopping into the bed, but it would never last. Soon, we would be slammed awake. After that, every creak and bang sent our minds racing with worry about how and whether the boat was holding up (of course it was fine, it was just us that were suffering). After twenty-four hours of this, I had a splitting headache from the combination of noise, pounding, little sleep, dehydration and lack of anything substantial to eat.

We came within sight of the Welsh coast (too far south) in poor visibility and then executed another backwards tack. It started to rain hard and the wind started gusting above thirty. Maryanne took over again and I tried in vain to get some sleep. Still, it was good to get a mental break from being “in charge”. Conditions were getting worse and worse and it was starting to seem like we would never make it out of this bloody sea.

Even though my off-watch wasn’t over until Midnight, by 9:30 I couldn’t take the futility of trying to sleep anymore and just got up. Maryanne had managed to get us within 15 nautical miles of the entrance to the Ribble River, our goal. Beyond the entrance, the marina at Preston is another 15 miles further. High tide was in four hours. Tides in this part of England have a range of just under ten meters. The coast is so shallow that the sea retreats for miles each low tide. If we timed it wrong, it was possible that we could end up dried out on the middle of a sandbank where we couldn’t even see the edges.

To miss the tide would mean being stuck out there for another 12 ½ hours. While I was getting to where I would welcome drying out as a relief from the incessant pounding, the more prudent thing to do was to get over the bar so as to not run the risk of drying out on an errant rock or shopping trolley.

We started the engine and made a beeline for the entrance buoy. Footprint was very hard to steer. The wind kept trying to blow the bows downwind and our slow speed made the rudders less effective than usual. As the depth rose from twenty meters to six or so, the waves turned from steep chop to breaking surf. Spray was flying everywhere. It was impossible to poke a head out of the cockpit enclosure and not get drenched. The only thing reassuring was the knowledge that the closer we got to land, the less fetch (room for waves to form) there would be. Because the tide was up and the water was so far inland, we would have to wait another three hours before the seas finally smoothed noticeably.

To compound this, it was dark, really dark. It was midnight during a new moon in the rain dark. The narrow channel up the river is “guided” by a pair of training walls that are partially submerged at high tide. The walls are marked every now and then with posts. Some are lit, some are not. We were very glad the radar didn’t care that it was night and had no trouble seeing obstructions we couldn’t acquire visually until we were right on top of them. Just to make things even scarier, we couldn’t slow down to allow more reaction time because we were racing the tide. By the time we finally sighted the doors of the Preston lock at about 02:30, we were both sooo ready not to be underway anymore.

We tied up to the deep water holding area on the wall outside the entrance, did a quick once-over to make sure everything important was done and collapsed. Footprint was a shambles, and we didn't care!
Posted by SV-Footprint at 4:32:00 PM

I'm sure it was even worse than you so aptly describe. So glad you made it through even in those conditions. Only goes to show what fantastic sailors you both are.

geez, i'm glad that had a happy ending. seriously, you're a great team and you knew all along you'd make it (me too!), but it's a shame you had to take such a pounding. happy to know you're in your new spot, safe and sound. and maryanne, i really do hope it's stopped raining!

Teach you to go to England. Glad you made it ok tho. TTH

I knew they didn't like Yanks, but so sad for Maryanne- I don't think they want her back! Maybe they just don't like catamarans... glad it ended well-