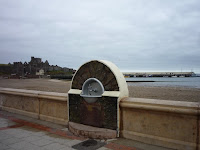 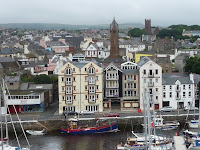 Peel, the only city, but not the capital of the Isle of Man
[Kyle]It rained all night. It rained so hard it was all we could hear. Big drops, little drops, more big drops, it did this all night as if we were in Seattle in the winter. A little low on motivation, we finally ventured out around Noon. By then, the wind had picked up. It swirled around buildings in such a way that it made the flying spray come from every direction at once. This meant that even though we were both wearing the full offshore outfit, it was impossible to keep our faces, and more importantly, our glasses dry by turning away from it.

We ducked into the Isle of Man Heritage Museum, deposited a couple of gallons of rainwater each on the floor in front of the cashier and bought two tickets. The museum, like most British museums, was really well done. It covered the history of Mann, as the locals call it, from the early Celts all the way to the present day. One of the displays was a replica Viking ship that had actually been sailed to Mann from Norway by a joint Manx/Norwegian crew. The display showed a re-creation of a Viking landing and even had the detail of real water with a swell created by a wave machine. At other parts of the museum, smells were apparently piped in. The general store smelled like perfume, the fish smoker smelled like smoked fish and the fish cleaning room smelled like raw fish. They also had people in period costume explaining various things they were doing, like weaving and rope-making. 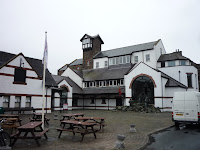 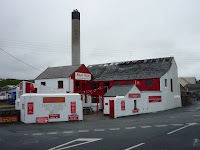 The Story of Mann museum and the traditional smoke house
The only downside was the videos. Actually, the videos, which were placed here and there within the exhibits, were pretty good, with action in Viking Norwegian and Manx Gaelic. The downside was the narrator, who was taking his role as God of the island a little too seriously. From him, we learned the proper pronunciation of the island: Talk to the person to whom you are speaking in a normal voice. As you approach the end of the sentence, make your voice louder and more forceful as you say, “The Island of…..”, then pause, turn your head ninety degrees, look toward the horizon majestically and in a deep, booming voice say, “MANN!” That’s the only way he ever said it. “They came to…….MANN!” They raised families and built towns on…….MANN!” “I just got a job narrating films on…….MANN!” It reminded me of the Middleton distillery tour where they claimed John Middleton single-handedly invented Western Civilization by opening a whiskey distillery in Ireland.

Actually, even though Mann is pretty much equidistant from Ireland, Scotland, England and Wales, the Manx accent sounds very Scottish to me.

We emerged from the museum to find the rain had stopped! What to do? I’ll tell you what; climb a hill, that’s what. We made tracks for a path out of town. Along the way, we passed by a kipper smokehouse and noticed the sign said the free tour was in two minutes, so in we went. 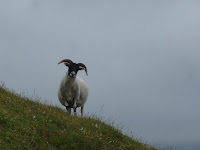 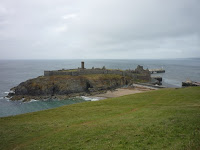 A walk! What a surprise
There was one guy working in the whole place. He seemed less than enthusiastic about dropping everything to give a tour, but then a bunch of other people showed up, so he knew he pretty much had to. In spite of the frequent interruptions to go ring up a sale at the shop, he actually gave a good tour once he started. The building smelled smoky and delicious. Like the others, that was enough to send us over to the shop for our own purchase.

We walked up to the top of the nearby hill and were rewarded with expansive views of the countryside, with Peel in the middle and the castle guarding the entrance to the harbour.

We descended into town and had another aimless amble until the errant raindrops started to grow closer together and more persistent. We ducked into a pub where we watched a quarter of the Uruguay/Germany match while sampling the local drinks. I had an O’Kell’s bitter, which was actually quite smooth and Maryanne had a Manx Spirit, a very respectably good whisky-like substance (apparently, they had lost a law suit and could not call it whisky, or whiskey).

Satisfied, we made it back to the boat before the wind and rain picked up again. No wonder the Isle of Man is so green.

[Maryanne]The Isle of Man has a strange status, and we've found it impossible to really determine if it is part of the United Kingdom or not? Apparently "true" Isle of Man natives are not entitled to a UK passport (unless they can prove a mainland link), but any UK citizen is allowed to have an Isle of Man passport. The IOM is NOT part of the EU, they use the pound but print their own money - so many differences, while feeling so "British". We called the UK immigration center to determine if we had to clear out of the UK to visit the Isle of Man (after several holds, they decided yes), we called the IOM immigration folks and asked the same question - did we need to clear IN to the IOM? - there answer was NO - what do you do? Everyone we ask gives a different answer. It's not surprising that we are confused as to the status, the locals are too. Kyle says the best answer he's had is they are British when it suits them.

It's mostly known as the home of the annual and internationally famous Tourist Trophy (TT) races - a motorbike race through the roads of the island. Also famous for the native Manx cat - the one with either no, or a very short stub of a tail. If you've heard of the Isle of Man at all, it is probably one of these two things. Our trip is confined to Peel, the only city but not the capital of the Island, but there is so much more to do, and if the weather had been kinder we no doubt would have seen more.
Posted by SV-Footprint at 6:51:00 AM

Email ThisBlogThis!Share to TwitterShare to FacebookShare to Pinterest
Labels: Isle of Man

I wish you sunny days ahead. What fun you are having! Not much to add, but want you to know I'm reading with great pleasure, as always.