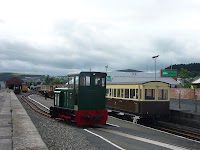 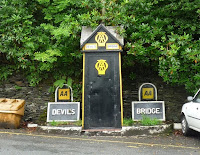 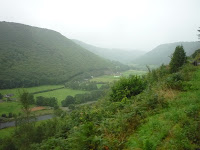 Picturesque steam train journey to Devil's Bridge
[Kyle] The day after, the morning was bright and sunny, so we packed a bag and headed to the railway station to board the Vale of Rheidol Railway for the one hour trip up the Rheidol valley to Devils Bridge.

We’ll get to Devil’s bridge in a minute, but first, the train ride. The Vale of Rheidol Railway runs a narrow gauge steam train the 11 1/2 miles to the Devil’s Bridge. Steam trains really are wonderful. They make great chug-chug noises and there’s loads of steam and smoke, not to mention the clackity-clack as the cars go over the track seams. Growing up in Colorado in The U.S., I have been on a few steam trains in my day, but I have never done so in Britain. It is soo much more entertaining here. I am thinking of starting a new hobby category: Train spotter spotting.

In addition to all of the cool steam engine stuff associated with such a ride, there is all of the fabulous entertainment of train spotter observation. Train spotters in Britain are people who are oh, shall we say, obsessive about trains. They LOVE trains. They keep meticulous records of any and all minutiae related to trains.

Any time the engine does anything...anything, these guys (they’re all guys) run out and snap away to record the action. We saw one guy take a few dozen still photos, then switch to video to record the rest of the nonstop action of the stopped train.

Once we got moving, we saw one guy video pretty much the entire journey through the front window of the coach into the back window of the engine and then back out the front. All three windows were covered in rain. We chuckled. Both of the people that guy hasn’t bored to death are going to have to be subjected to that video. Actually, the ones left may be the ones who find that sort of thing riveting.

The whole experience provided even another level of entertainment for Maryanne. Every time I took a photo of any part of the train because, let’s face it, a well maintained steam train is a lot more interesting than some run-of-the-mill British Rail diesel, she would send herself chuckling for half an hour making various jokes at my expense: “Did you write down the engine number, Darling?” “Do you want me to buy you a DVD from the gift shop?”, “I bet they have an app on the iPhone for people like you.”, etc. Oh, Hardy-har-har! Very funny! After subjecting me to this for a while and making her sides hurt, she turned her attention to the stills-cum-video guy for a while, who was taking enough footage to reverse-engineer the engine in his basement when he got home. When the whistle was blown for all-aboard, he came and sat down right behind us next to his wife, who had been there all along. Maryanne got a guilty sheepish look on her face and now it was my turn for a good chuckle.

After an hour of watching the production of several different hour-long documentaries about steam discharge or axle use that all seemed oblivious to the stunning mountain scenery along the way, we arrived in very good humor.

It was raining pretty heavily when we arrived, so we popped into a local hotel for some tea and Welsh cakes to kill some time until it eased a bit, then we walked down to the entrance to the trails at Devil’s Bridge. Devil’s Bridge itself is actually three bridges, each built on the site of the previous one starting in 1087 and spanning a pretty, narrow gorge. The bridge(s) as well as the gorge and the waterfalls below are accessed through a pair of coin-operated turn-styles at the top. I didn’t realize until after I’d wedged myself in with my daypack on that the sign should have said: Adults - £1, packs - another £1, Americans - Please feel free to enjoy some of our other attractions. 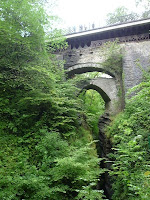 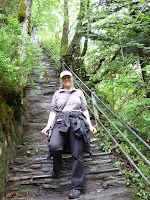 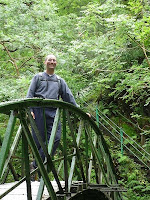 Oh Boy, now he has me on steep hikes we have to pay for!
Anyway, the trails took us down the gorge for some nice views of the bridge as well as several waterfalls interspersed with A LOT of steps.

By the time we made it back to the road, it was starting to rain harder. We still had 3 1/2 hours to kill before the train ride back, so we wandered around a bit on the local roads until the increasing rain drove us back into the hotel for a lunch of soup followed by a game of darts and a sampling of Welsh whiskey - Penderyn - interesting in it’s own way, but not my favorite. 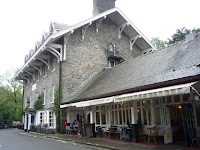 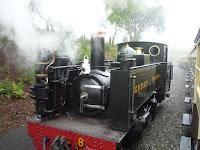 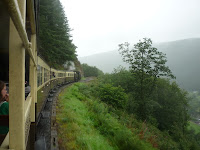 A perfectly placed pub to while away the rainy hours before the return journey
We slogged back to the train, boarded and then watched it rain harder and harder during our journey. By the time we got to Aberystwyth, it was hard enough that we were darting from awning to awning and zigzagging along the sidewalks on a route that offered the best cover from trees. We arrived back at Footprint dripping and cold, our glasses opaque. It felt so good to stand in the cockpit and not be being rained on for once.

Bloody British weather. It feels like we’re stuck in a perpetual early March. Every now and then, there’s a nice day, but it’s really not going to start getting warm for a few more weeks, except for one thing: it’s August! This is it. This is already the height of “Summer”. Everywhere else in the northern hemisphere is baking and people are looking forward to some relief from the unrelenting heat. Here, it feels like the first day of Spring must be just around the corner. I’ve got to go outside and prepare for the next leg, but I don’t want to go out in that.
Posted by SV-Footprint at 5:57:00 PM

The train spotters--hilarious. They have them here too, you know.Those guys are like ants at a picnic. As you know,I've ridden as many steam trains as possible and at each one, the OCD train guys are there. This train looks like a true jewel, a strange little engine,but beautiful. I am laughing uncontrollably reading you writing about Maryanne laughing uncontrollably about you. Certainly, Freud would be able to make something of that.

What a treat your adventures are!