Back Snugly in Preston

[Kyle]Three o’clock in the morning arrived in Conwy. By then, we’d already been gone for 20 minutes. Our route out of the river had us going directly into the wind with the current until well into Conwy Bay, where we would make a crosswind turn to clear the peninsula before turning on the long downwind leg to the entrance to the River Ribble on the other side of the Irish Sea.

I had expected sloppy wind against wave conditions in the open bay, but almost as soon as we pulled into the ebb on the River Conwy, the standing wave party started. It was very dark and the current was sweeping us out of the river very quickly. We were both worried about being swept into moored boats or out of the winding channel should we fail to spot one of the navigation markers. Loss of way for steerage would have been very serious and I doubted the strong currents in this part of the river had left behind enough good mud for a hasty, emergency anchoring. I was less than eager to push our transmission/propeller too hard as I didn’t want a repeat of the same problem we had coming in.

Every time Footprint and a wave would collide, we would come to a complete stop, We may have even been being pushed slightly backwards. There is a pretty good chance the prop was also encountering the aerated crests of the waves as they passed under us every time we pitched into the next trough. At our modest power settings, the boat was not able to pick up speed again against her own weight as we climbed back out onto the next wave. This meant we had a pretty long time of having the engine in forward and the speed reading zero.

Or, it could be that the engine wasn’t converting any of its power to propeller thrust. If there really was a problem, I didn’t want to exacerbate it by adding power, which left us the option of waiting it out and using the ebb to flush us into the bay, using minimal power to stay in the middle of the channel.

It was a miserable ride through all of that slop. We were straining so hard to make out any obstructions that I had no time to really figure out why we were going so slowly through the water. It was a tense ride and our lower speed made it long and tense. It had very much the same feel as driving on a windy, deserted road with no reflective markings in heavy rain with dodgy brakes. It is amazing how much adrenaline gets released in such situations. Even though it was four in the morning and neither of us had done much else but nap lightly before our departure, we were WIDE awake. Even though we were moving over the bottom at what was ordinarily a sedate, even boring, speed of three or four knots, the idea of getting swept sideways into a big steel navigation mark, or worse, rocks, at four knots was sufficiently terrifying to get our full attention.

Further out into the bay, the current diffused and slowed. The horrible wind against wave mess we were in calmed down a little and we gradually attained the sort of speeds we would expect against waves of that size and wind of that strength. I gingerly added more and more power until we were almost at our normal cruising rpm with no signs of trouble. Perhaps it was just the conditions.

Once we got clear of the channel in Conwy Bay, we hoisted the sails, shut down the engine and made the downwind turn for England. Even though it was the Irish Sea, the ride wasn’t actually that bad. This was entirely because our point of sail was both well downwind and down wave, going the other way would have been a nightmare. Our forward speed brought the apparent wind speeds down into the mid-twenties, which was fast enough to keep us moving near wave speeds, giving us the sensation of a gentle, rolling float eastwards.

In fact, we were going a bit too fast. We needed to arrive at the Ribble about two hours before high tide in Preston in order to be able to clear the bar at the entrance. We reefed and reefed again until we were carrying only enough sail for winds double what we were experiencing before finally getting slow enough to make it work.

As we approached the English coast, the sea gradually shallowed, making the waves shorter and steeper. The wind had been gradually increasing all day until it was reaching into the 30s, causing the waves to grow even further still. As the depth decreased to around 15 meters, I started noticing that there were beginning to be a lot more waves that I couldn’t see over and it was starting to get pretty rough for us in spite of our downwind direction.

By the time we approached the river entrance in 5 meters of water, waves that were themselves 3 to 4 meters high were breaking and toppling over everywhere. It was getting rather alarming. We pulled down the mainsail entirely to slow down even more, just in case in we dropped off of one of them, and just rode the seas in. I could only imagine what we must have looked like to anyone watching from shore; a tiny catamaran with a scrap of sail hurtling in from sea through the pounding surf. I suspect the answer is: crazy. 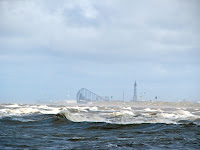 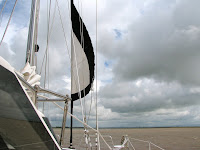 Rough seas as the water shallows, with Blackpool in the background, and once fully in the river Ribble, calmer again with a down wind, with current sail and a scrap of jib to keep us in the channel
Further up the Ribble, the swell had finally lost all of its energy and the water was flat. We were pushed upriver by both the wind and the fast flood current. We were still going too fast to have deep water when we arrived at Preston, so I reduced sail further until we were only flying the reinforced panel at the clew of our jib. Eventually, that became too much, so we furled that and sailed for a few miles under bare poles. With just the drag of the wind going over the boat, we were averaging three knots through the water and about eight over the bottom, gliding through the flat countryside.

We started the motor sufficiently early to make sure it worked and called the bridge operator in Preston. That guy hates us. We have been told by several people that he’s grumpy anyway and really needs to retire, but he seems to hate us especially. He was civil enough on the radio on the initial call, but seemed to make a point of having us wait once we got there. I decided to be patient and just wait until he was ready, rather than run the risk of bothering him further with repetitive radio calls. several minutes passed with no sign of movement on his end. We were starting to get worried that he had misunderstood us and not interpreted our request for an opening as a bridge-and-all-other-intervening-encumbrances opening, and that perhaps he required a separate call for each step. I called as politely as I could and told him we were ready for the bridge when he was. He told me there was a train in 7 minutes and he would open when they were over. I got the sense that he thought we were idiots for not knowing that. Hmmm, seems like we could have been well through by now, but he’s gotta do what he’s gotta do. Well, we did get to see a cool steam train cross the river right ahead of us (no, I did not get the number). 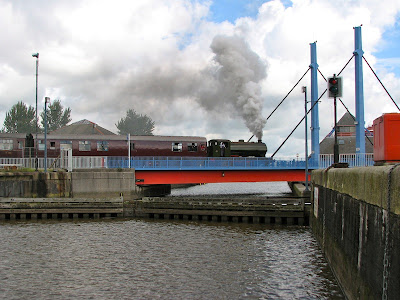 Waiting for the train before the last lock gate and the swing bridge before home
Finally, we were in. Now that we were safely in the basin with no other critical maneuvering required, we decided to give our engine/transmission/propeller a good check-over. We figured this was the best place to uncover any problems as we would have all Winter to fix them if something came up. The poor engine and drive train. I did everything I could do to make it fail. Even with Footprint going as fast as I could make her go backwards, and then switching to full forward throttle (with a brief pause in neutral of course), putting maximum possible strain on the whole system, I did not notice any slippage or loss of thrust. Good news. We took Footprint back to her new and improved, wider dock and tied her up, probably for the rest of Winter.

That’s just as well. I’m getting pretty sick of the bloody Irish Sea as well as what passes in Britain for Summer. I’m sure poor Footprint would say the same if she could talk. I think it will be good to have a few months to give her some much needed TLC and get her back in proper shape for next year, which will, of course, whatever direction we head, have to start with yet another trip into the Irish Sea.
Posted by SV-Footprint at 1:37:00 PM

Hi Kyle and Maryanne,
Just a brief propeller observation. In the past all of my propellers were directly driven by the shaft with a shear pin through the shaft. The bronze propeller made direct contact with the stainless shaft. Recently I acquired a used outboard. After some use there was a loss of power much like you described on board Footloose. When i took it apart I discovered that the shear pin drives a large rubber busing that has heavy longitudinal ribs. The bushing is as long as the propeller hub is deep. The propeller slips over the bushing. The propeller nut holds the propeller tight to the bushing, which is in turn held tight to the shear pin. In my case age and wear had allowed enough play to get into the system that propeller and bushing no longer had a tight fit.
Regards,
Andrew

You seem to have developed quite a relationship with the Irish sea and this last leg was hair-raising. So glad to hear you are all tucked in, safe and sound and ready to wait out the winter. Winter. Hmmm. Can't quite imagine that, as it was well over 100 degrees here today, but I'll take your word for it.

wow! another hair-raising trip on the irish sea! isn't it nice that there are so many GREAT sailing experiences so that you can effectively forget the bad ones? i understand childbirth is like that, that the brain releases something afterwards so that women "forget" the pain and go on to have more children. probably a rotten analogy, but you get it. so glad you navigated successfully and are all the more knowledgeable about the irish sea and your sailing vessel for it. footprint rocks!