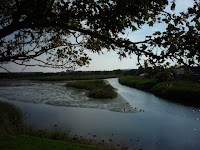 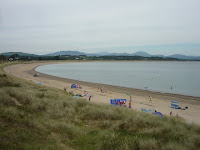 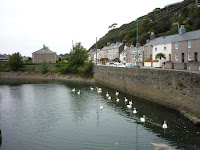 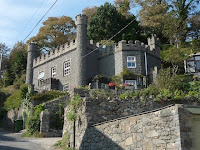 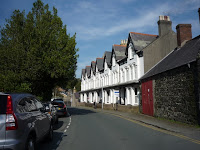 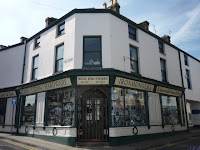 Pwllheli Scenes
[Kyle]Pwllheli, pronounced: “Part of this complete breakfast”. Actually, the closest English approximation is somewhere between “Poothelly” and “Pooshelly”. We were advised that, unless we were Welsh, Sioux or !Kung, would never get it because of its use of what is referred to a ‘voiceless lateral frictive’ {honestly!!!!}.

Our main reason for stopping in Pwllheli was that it was the nearest Westerbeke Service center and our engine was due for a major service.

In our usual fashion, Maryanne had sent an email 2 months, 1 month, 2 weeks, 1 week, 3 days and one day before our arrival. Just to be sure, since it was quite a long way to come, she followed it up with a couple of phone calls. Well, you know what’s coming next. When we arrived, we called them and got the sneaking suspicion from their tone that we had surprised them. They did concede that they got the emails, but were clearly shuffling things around to accommodate us. Instead of bright and early as we had expected (and agreed), the guy showed up at 4:00pm, took a look at the engine and said he would start tomorrow when they get the parts. Maryanne interjected and explained that we had all of the parts that he would need in our ship’s stores so he could start now and use the shipment to replenish our stores. He countered by saying it would be better to wait until the next day in order to save the extra trip to the office to pick up the parts. “Fine” we said, “See you in the morning”. We asked when that would be and were told 11:00 - unless the shipment was late, then it would be more like 1:00.

At 1:30 the guy showed up to explain that the shipment wasn’t in and said he’d be back at 4:00. Maryanne reminded him that we had all of the necessary parts and suggested he just start now and get the parts later. He agreed and went to the truck to get his tools. I imagine that somewhere in there, he called his brother (his business partner) and told to go do what he was originally supposed to be doing.

He showed back up at 4:00. To his credit, he was friendly and prepared and he worked until the job was done, even making a much after hours trip to the shop to replace a bolt he had misplaced.

He and I chatted away as I hung off the transom fixing the drive leg. That’s when I found out it was he and his brother who owned the shop. He is full-time mechanic. His brother is part-time mechanic, part-time office manager. It turns out his brother is not so good at reading emails. He gets busy, you know. To cover the goof-up, our guy had to come out on his day off. We apologized, but he said it happens all of the time - it’s part of owning a business.

Since the shortage of good berthing opportunities combined with market forces to make the rates at the marina border on price gouging, we were determined to get full value out of our stay. On the previous day, once we realized all hope was lost, we did everything in Pwllheli. This did not take too long because Pwllheli isn’t a large town. 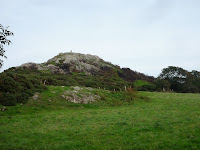 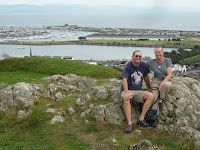 Another hill to climb
We started in the usual manner by heading up the nearest hill to get an overview so that we could eyeball our subsequent route. It was wonderful up there. We had long views of the Llŷn peninsula to one side, Pwllheli to the other, backed by Wales’ highest mountain, Mt. Snowdon.

We descended into the town and had a walk along the beach back toward the boat. We complimented owners on their dogs, kids on their sand castles and parents on their kids. All were met with the stare. 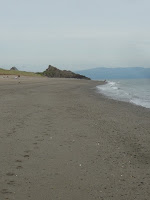 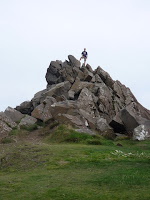 Oh, the kid just has to climb everything!
At the end of the beach, we had a climb on the rocks there and then made our way back along the water back to our boat. All the while, we were looking out for a promising pub, but nothing jumped out at us, so we just called it a cozy night in.
Posted by SV-Footprint at 5:18:00 PM

If anyone realized who they were really dealing with--what with Maryanne's iterations and reiterations of agreements and plans in solid granite--they would never dare be anything but prompt and thorough with you. But they just don't know...poor dears.

P.S. I hate this damned word verification thing you have to write every time you want to make a comment. I think it's scared off all your posters, I really do!