[Kyle]After my next trip to work, the vicissitudes of airline scheduling meant that, in this particular instance, I could get home to Begonia a day and a half earlier if we rented a car and Maryanne made the three-hour drive to get me in Portland. We finally crawled into bed after a freezing row in sideways drizzle from shore at about 2:00am.

At 6:00, we got back up. It was my third day in a row of similar amounts of sleep, so I was really struggling with it. A rental car for us is a rare and useful treat. We only had it until noon, so we wanted to make the most of it before we had to take it back. Maryanne had it all figured out already. All I had to do was stay awake and drive.

{Maryanne: OK, right now I feel any reader may be distressed at my disregard for Kyle's health and his need for sleep. The reality is that Kyle has had little time to enjoy ANY of the places we've visited since Boston. We are supposed to be cruising, but really Kyle has just been sailing between commutes to work. We were in sight of Arcadia National Park, we were about to leave, and we had a few hours use of a car. I really didn't want Kyle (or myself) to miss out yet again. He can sleep later. As we set out it was drizzly, and with low cloud on the hill tops, but the forecast was for it to clear, at least slightly; it was all we had, and I'd make the most of it, Kyle would appreciate me after the fact!}

We headed for Acadia National Park and its 27-mile park loop road. The most efficient thing, time-wise, for us to have done, would have been to have driven the loop the night before in the rain. Then, it would have been a simple time/distance calculation. By morning, however, it had stopped raining and all of the daylight made it possible to actually see all of the trailheads and scenic overlooks. There was NO way we would be able to do all of those great 4½ mile hikes in a week, much less a few hours. It was painful to have to skip so much. It was great that we had at least some time to see it.

We made a list of must-see stops, and then and then raced from place to place in a mad dash. We’d park the car, run up the trails to the viewpoints, run back, hop in and take off. We must have looked to everybody else like we were on some sort of competitive timed treasure hunt. 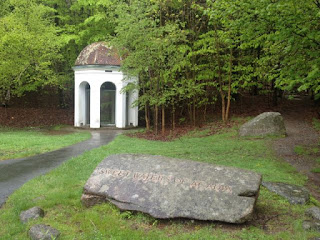 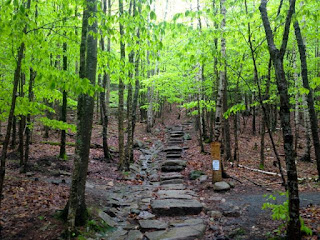 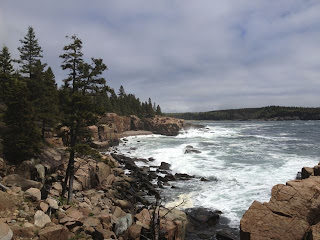 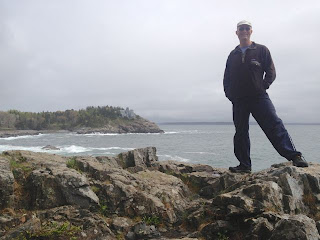 The surf explodes at Thunder Hole

We made it back to the rental car place right at the last minute of our rental period. They were kind enough to drive us back to the boat, saving us the 6½ mile walk. Even though we were exhausted, we decided not to waste a minute of our remaining time here, and refused to return directly to the boat (the rain had practically stopped!). There was a small museum that Maryanne had spied just five minutes from our boat and wanted us to explore. The museum was closed (too early in the season!) so we wondered about and along the way we found a trail that ran along the shores of one of the lakes. We took it. At the other end, the trail seemed to go right into somebody’s back yard and up the side steps attached to the house. Not knowing what else to do, we tiptoed past, only to find at the front of the house that it was actually the headquarters for a private conservation organization that manages the trails, among other things. 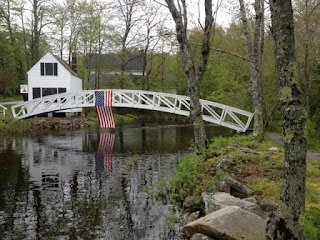 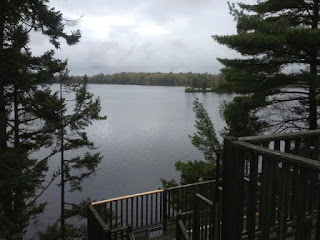 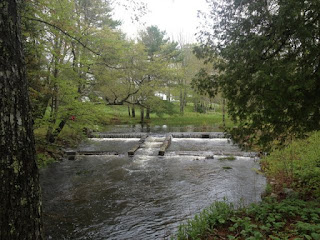 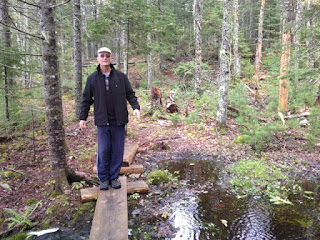 The town museum was closed, but we followed water up-stream from the mill and found fish ladders and eventually found woodland trails leading us to Somes Pond and Somes-Meynell Wildlife Sanctuary

We met a woman in the parking lot, who suggested we go in through the house to the back deck for some nice views of the lake. We initially surprised the Director inside with our intrusion, but he quickly warmed to us, and we soon found ourselves in a long conversation about the lake, the trails and the various conservation efforts underway, particularly the loons and the alewife, a herring-like fish.

We made our way back to the dinghy in meandering fashion, stopping every now and then to see something interesting. Once we were there, I just knew that if we stopped moving, we would fall asleep here we sat. Since it was close to high tide, the harbor had ten more feet of water in it than it had when we left for the drive. Many of the impassable muddy areas were now deep water. This allowed me to kidnap Maryanne for a pretty row around Sheep Island before we actually got back to Begonia for an early night. 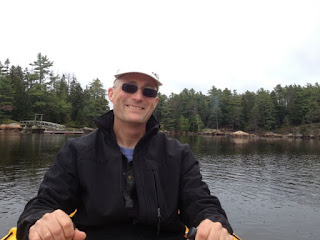 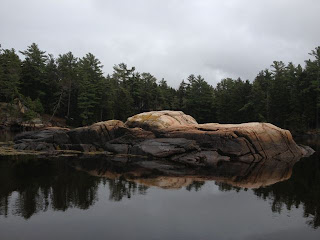 We end the last of the daylight hours with a row around the island in the harbor
Posted by SV-Footprint at 5:57:00 PM